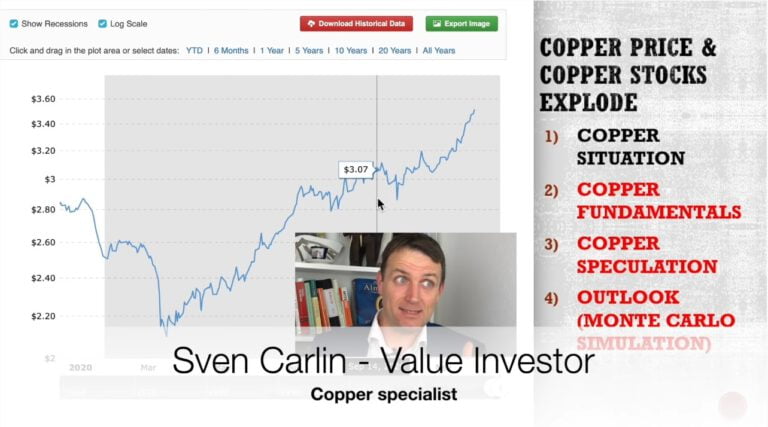 Copper stocks and copper prices have exploded. Short term anything can happen because the end of the copper cost curve is very steep. A monte carlo simulation shows copper prices can easily go above $4.

Clint Carlson's Black Diamond Partners was up by about 2.1% net for 2020 after a strong fourth quarter. In his December letter to investors, which was reviewed by ValueWalk, Carlson said it's difficult to give an overview for 2021 because the first and second half of the year will likely look very different. Q3 2020 Read More

The following is a computer generated transcript and may contain some errors.

Good day fellow investors. So over the last 10 months, eight months, copper prices have been exploding and now have reached a high of 3.5. dollars. Consequently, stock prices exploded from the march lows Freeport, the largest copper miner traded has almost quintuple, which is really great for those that have been invested in companies we discussed also South turn copper has also more than doubled. And in line with yesterday's video about Jim chains and the dangers of retail investing, I really wanted to discuss the copper situation, the copper fundamentals, the risk and reward, the speculation behind the current prices and the long term copper investing outlook.

And I think it will give you a great perspective on what to do and what kind of investor or speculator you are. And just to tell you that I'm not just somebody that's talking about copper now, because it's hot. This channel has been been built on the copper thesis, we made a lot of money on copper miners over the last three, four years. So I even made in September 2019 video that you regret not owning copper in your portfolio.

And here we are a little bit more than a year later. And it has happened a month ago, the investing strategy, three port analysis. And also, I started this channel even earlier than that with NAB soon. And when it was bought out, we made also very good money. And again, I updated my thesis on copper just a month ago, I had you have a 40 pages report these risk and reward on my stock market research platform. And then you also have a lot of analysis on the risk and reward of many, many copper stocks. In this video, I just want to summarise a little bit what's going on with the fundamentals with the copper price to give you an indication where we are on the risk and reward so that you can see how it fits for your portfolio. If we go to the cost curve, how are copper prices set, the marginal producer the last one, depending on the demand and supply in the market, he sets the price for everybody.

So if supply is low demand is higher than supply, then everybody is rushing to words buying copper speculators come in and increase the demand for copper. We are now we're in a situation where ports are congested, it's difficult to unload. It's difficult to mine. And this is the reason for the higher copper prices because we see that most of the producers have lower than $3 per pound producing cost costs, which means that the average is around here, the long term average with short term spikes based on the steepness of the final part of the cost curve, which also implies that now making calculations of these on these higher prices is very dangerous fundamentally. And if we look at this pure speculation in the market, you see how there is a lot of speculation on strong economic revivals. Now the economy will be lower than it was in 2008 19 for a little bit longer. Again, global economic recovery.

Mining super cycle doc is back as stocks go higher higher. And this is the environment we'll live in. As discussed yesterday in Janice's video, the dangers of retail it's party like it's 1999 all over again. However, these are really worries and this is what makes copper go up. Okay if there are supply worries if there are issues in Chile in Peru, then prices go up. But that evens out over time because the costs are what sets a commodity price. The cue for higher prices in a commodity environment are higher prices. producers that have evolved their minds because of low copper prices will now ramp those up will increase investments especially as copper prices stay a little bit longer. There will be plenty of money flowing into the system which will lead to oversupply down the road. And that is what you look in those cycles. low prices high prices low prices, high prices, low prices because of the over investment here led through low prices, then prices went up investments Also from here still ramping up, ramping up Cobra, Panama, low prices in crisis. And now we are seeing higher prices but mostly due to COVID.

And the short term speculative repercussions long term, we are here average prices around three. And we also made the friends of mine made thank you for that made a Monte Carlo simulation using 10 years of data, the expected outlook for copper is free. So at 350 is a risky bet to bet more on copper, below 250. It's a low risk, high reward value investors. As all that bought a copper stock like I did on the 20th of March were very well rewarded. In a few days I'll talk more about my portfolio, so subscribe and click that like button so that you see more of my videos on the range for copper prices. Yes, it can go much higher, even above four, it is possible can go much, much lower. And that depends on the supply and demand. If you are really interested more in copper, we are now doing iron ore. I have bought a fertiliser company this morning because it's still cheap and that commodity environment. Please check my stock market research platform. That's what we do. And if you don't feel you'll get value over the years from my research from my updating from my covering a lot of those stocks, then you can simply ask your money back in 28 days. Thanks for watching, and I'll see you in the next video.