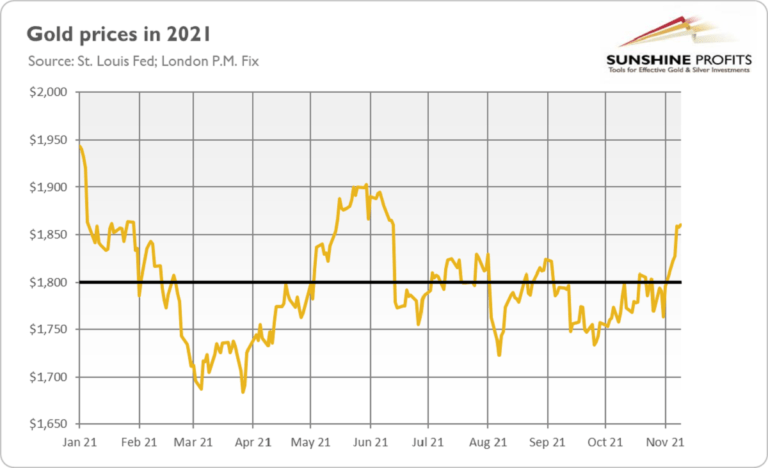 Gold rallied thanks to the changed narrative on inflation, and Biden’s infrastructure plan can only add to the inflationary pressure. Huge price moves ahead?

How The Government Should Decrease Inflation

I have a short quiz for you! What the government should do to decrease inflation that reached the highest level in 30 years?

Please guess which option the US government chose. Yes, the worst possible. Exam failed! At the beginning of November, Congress passed a bipartisan infrastructure bill. And President Biden signed it on Monday (November 15, 2021).

To be clear, I’m not claiming that America doesn’t need any investment in infrastructure. Perhaps it needs it, and perhaps it’s a better idea than social spending on unemployment benefits that discourage work. I don’t want to argue about the adequacy of large government infrastructure projects, although government spending generally fails to stimulate genuine economic growth and governments rarely outperform the private sector in effectiveness.

My point is that $1.2 trillion infrastructure spending is coming at the worst possible moment. The US economy is facing supply shortages and high inflation caused by surging demand, which choked the ports and factories. In short, too much money is chasing too few goods, and policymakers decided to add additional money into the already blocked supply chains! I have no words of admiration for the intellectual abilities of the members of Congress and the White House!

Indeed, the spending plan does not have to be inflationary if financed purely by taxes and borrowing. However, the Fed will likely monetize at least part of the newly issued federal debt, and you know, to build or repair infrastructure, workers are needed, and steel, and concrete, and energy. The infrastructure spending, thus, will add pressure to the ongoing energy crisis and high producer price inflation, not to mention the shortage of workers.

What does the passing of the infrastructure bill imply for the gold market? Well, it should be supportive of the yellow metal. First, it will increase the fiscal deficits by additional billions of dollars (the Congressional Budget Office estimates that the bill will enlarge the deficits by $256 billion). Second, government spending will add to the inflationary pressure, which gold should also welcome.

After all, gold recalled last week that it is a hedge against high and accelerating inflation. As the chart below shows, gold not only jumped above the key level of $1,800, but it even managed to cross $1,850 on renewed inflation worries. The infrastructure bill was probably discounted by the traders, so its impact on the precious metals market should be limited. However, generally, all news that could intensify inflationary fears should be supportive of the yellow metal. 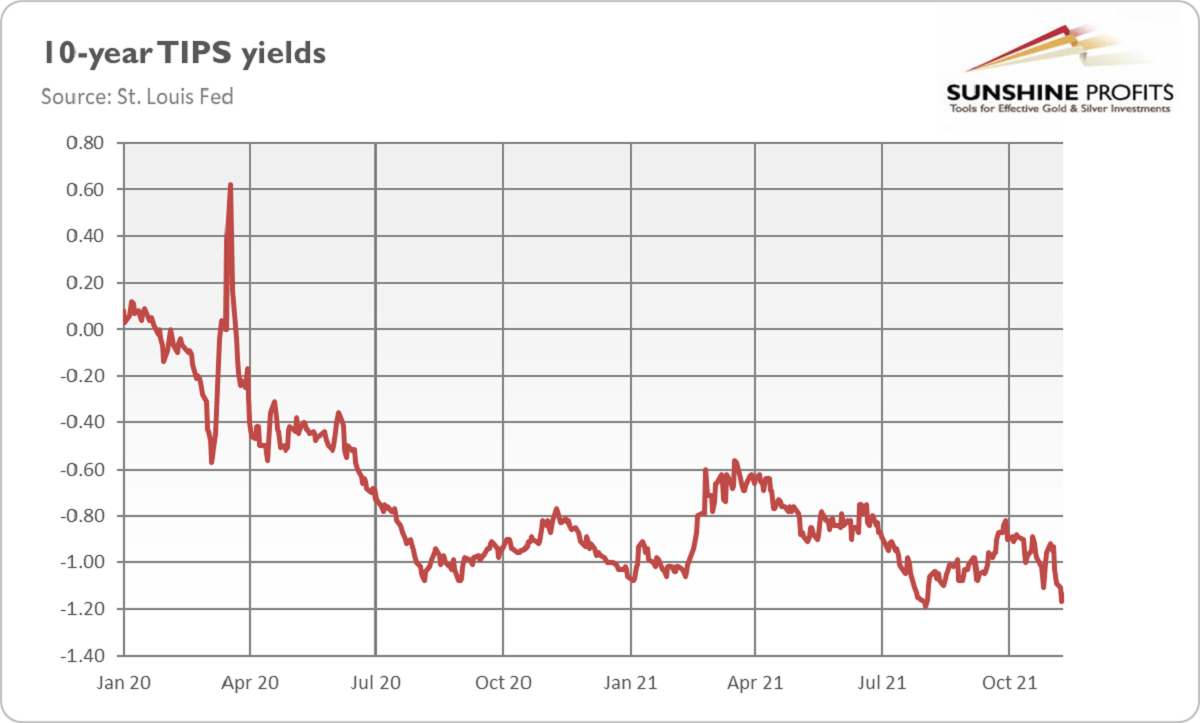 You see, the narrative has changed. So far, the thinking was that higher inflation implies faster tapering and interest rates hikes and, thus, lower gold prices. This is why gold was waiting on the sidelines for the past several months despite high inflation. Investors also believed that inflation would be transitory. However, the recent CPI report forced the markets to embrace the fact that inflation could be more persistent.

What’s more, tapering of quantitative easing started, which erased some downward pressure on gold. Moreover, despite the slowdown in the pace of asset purchases, the Fed will maintain its accommodative stance and stay behind the curve. So, at the moment, the reasoning is that high inflation implies elevated fears, which is good for gold. I have always believed that gold’s more bullish reaction to accelerating inflation was a matter of time. It’s possible that this time has just come.

Having said that, investors should remember that market narratives can change quickly. At some point, the Fed will probably step in and send some hawkish signals, which could calm investors and pull some of them out of the gold market. My second concern is that gold could have reacted not to accelerating inflation, but rather to the plunge in the real interest rates. As the chart below shows, the yields on 10-year TIPS have dropped to -1.17, a level very close to the August bottom. 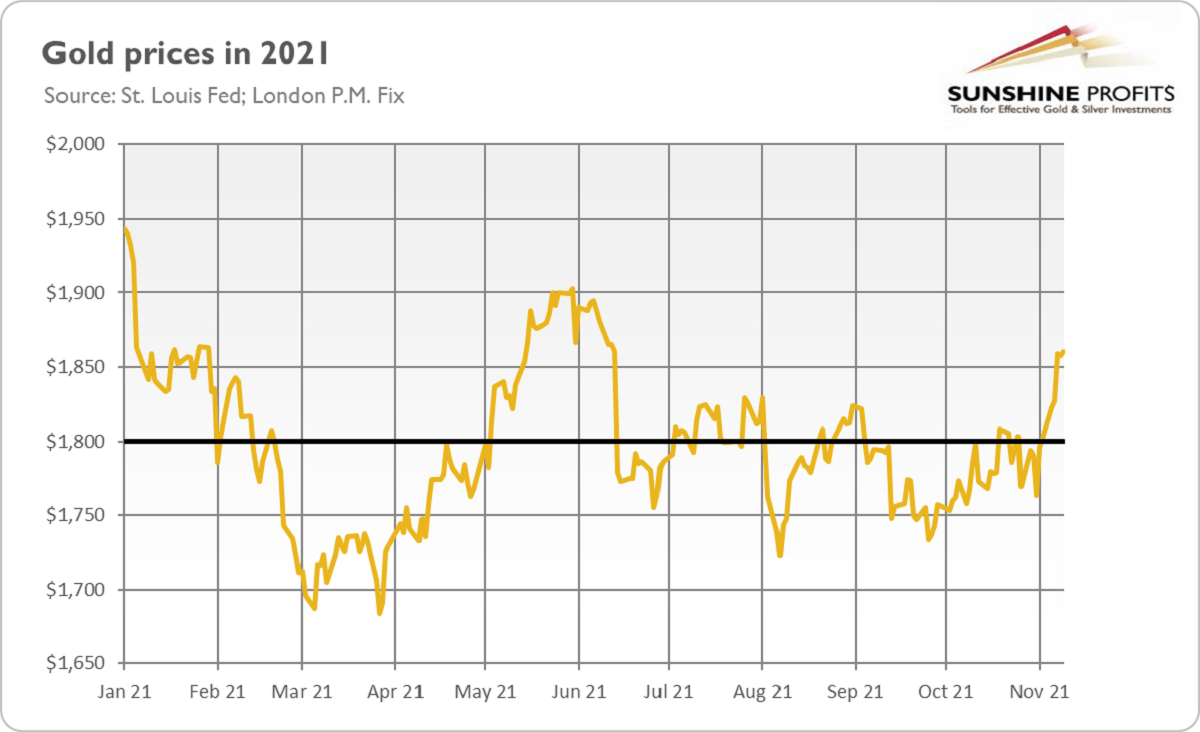 When something reaches the bottom, it should rebound later. And if real interest rates start to rally, then gold could struggle again. However, I’ll stop complaining now and allow the bulls to celebrate the long-awaited breakout. It’s an interesting development compared to the last months, that’s for sure!