During the 1998 Berkshire Hathaway meeting, Warren Buffett and Charlie Munger were asked a question about the return-on-equity of American banks. They commented on the topic in a typical Berkshire-like fashion. They then got off on a tangent that provided a truth of biblical proportion.

How Do You Beat Bobby Fischer?

So it’s not at all clear that if all American management were dramatically better, leaving out the competition against foreign enterprises, that returns on equity would be a lot better. They might very well drive things down. That’s what, to some extent, can easily happen in securities markets. It’s way better to be in securities markets if you have a 100 IQ and everybody else operating has an 80, than if you have 140 and all the rest of them also have 140.

So the secret of life is weak competition, you know. (Laughter)

Somebody said, “How do you beat Bobby Fischer?” You play him in any game except chess.

We think this is an excellent time to ponder the thoughts of Buffett and Munger. 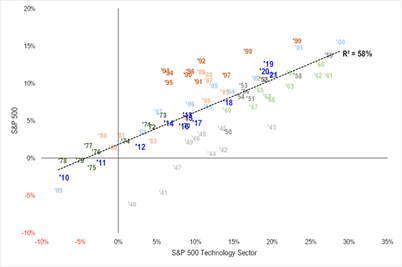 Over the last 12 years, the chess game for the S&P 500 has been the technology sector. Let’s first start by looking at how technology has explained 10-year S&P 500 returns. To the right is a chart that we were provided by the folks at Fundstrat. 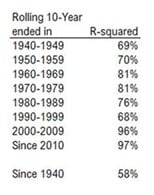 To the right is more data provided to us by Fundstrat that shows the explanatory power (R2) of tech and the S&P 500 by decade. As readers can see, it is true that the 2010’s were well explained by the tech sector (97%). It’s true that the terrible 2000’s were also explained by tech (96%). This was a decade marled by stocks producing bear market declines and negative nominal returns over 10 years. The worst problem for investors and wealth was in the real returns, as Jeremy Grantham would remind you. You can see this relationship plotted by year in the chart above as well.

Pundits in the marketplace are explaining multiple paradigm shifts going on today. The move to passive continuing is one of these. Another is the belief in an ever-increasing rate of change in our daily lives, catalyzed by the pandemic. A last example would be the belief that the usefulness of oil and gas will decline at an increasing rate, particularly in the developed economies.

There are many brilliant people that have entered these arenas to present their new ideas. Passive has had smart beta and ESG join this competitive space. The sheer number of technologies coming to market via IPOs and SPACs today are historic in nature. Lots of capital competing in this innovative era. The alternative future also has many companies competing now in wind, solar and other renewables. It’s easy to say there is more fresh capital gunning to replace oil than fresh capital to compete in oil. It doesn’t sound like weak competition for these arenas, regardless of what the hot technology wizards have sold you lately. To harken Buffett, lots of 140-IQs are in these strategies.

In that same Berkshire meeting, Buffett likened the increasing return-on-equity of banks to be a mean-reverting exercise.  He proposed a parable of having 500 Jack Welch’s running businesses in the S&P 500. They’re all brilliant, but it’s not likely to help them compete and will probably do more harm than good in the long run.

Competing With The S&P 500 Index

This brings us back to competing with the S&P 500 Index. If we would like to beat it as investors, we shouldn’t try to do it in tech. We will play in other sectors like energy and mall REITs. Why would an investor try to compete in those sectors/industries? The market can’t produce large success there. Even with the recent rally in energy stocks, the market has ended up with a pesky 2.77% ownership in the energy sector. Mall REITs are nearly invisible. As COVID infections disappear and the economy has a great awakening, we believe that our clients could make wonderful returns in this industry. The S&P 500’s ownership of Macerich (MAC) and Simon Property Group (SPG) is a minuscule 10 basis points (0.10%). If these types of businesses win in the stock market, the S&P 500 will be able to do nothing but shrug.

This lack of ownership is important, but if we invert it, we can also see the same problems in over-ownership. Why did the S&P 500 do so poorly during the 2000’s when tech was 29.18% of the S&P 500 at the end of 1999? We can’t tell the future, but we believe this isn’t helpful to the S&P 500 in the 2020’s. Why could the market do poorly in the 2020’s? Well, tech is 27.61% as a sector which gets us very close to the 1999 high. This doesn’t fully explain the problem now. Communication services and consumer discretionary are littered with tech companies of yesteryear that make this far and away bigger. 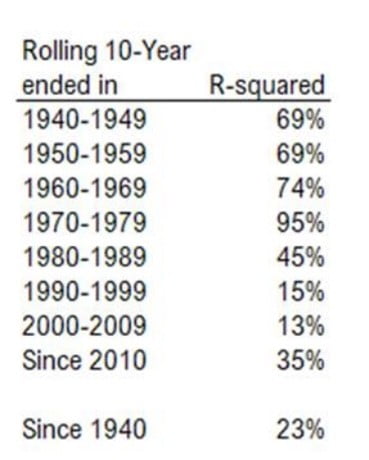 There was another era like this where investors could have avoided intense competition. To the right is the explanatory power of the S&P 500 and the energy sector by decade. There was a bigger historical outlier. It was the 1970’s. Energy stocks produced more than the overall return of the market during that decade (sound similar?). It became such a large over-ownership problem that eight of the ten largest market cap companies of the S&P 500 were energy stocks. Just like you don’t want to play chess with Bobby Fischer, you didn’t want to try to compete with the S&P 500 in energy stocks at the end of 1979. Even if you were smarter than most, it was a losing proposition for the market and the investors in that arena.

We sit at a juncture where we tell clients that the S&P 500 is likely to make 2% compounded over the next 10 years, including dividends re-invested. We are excited for our clients and as investors ourselves because of these problems. We believe the secret of life is staring at us in the S&P 500: weak competition. We plan to take advantage of this by playing Bobby Fischer in any game except chess.

The information contained in this missive represents Smead Capital Management's opinions, and should not be construed as personalized or individualized investment advice and are subject to change. Past performance is no guarantee of future results. Cole Smead, CFA, President and Portfolio Manager, wrote this article. It should not be assumed that investing in any securities mentioned above will or will not be profitable. Portfolio composition is subject to change at any time and references to specific securities, industries and sectors in this letter are not recommendations to purchase or sell any particular security. Current and future portfolio holdings are subject to risk. In preparing this document, SCM has relied upon and assumed, without independent verification, the accuracy and completeness of all information available from public sources. A list of all recommendations made by Smead Capital Management within the past twelve-month period is available upon request.