ValueWalk
Home Business Almost Everyone Is Online: But Most of the Money Isn’t

Ottawa sure is a long way from Silicon Valley. In the summer of 2010, Tobi Lütke met with venture capitalists at Bessemer Ventures. He was looking for a couple million bucks to fund his money-losing Canadian startup. Cash was so tight Lütke’s father-in-law had to write checks to pay the employees.

Bessemer was skeptical at first. A tech startup in bitterly cold Ottawa? But they took the plunge with a $7 million cash injection, valuing the startup at $25 million.

Guess What Shopify (SHOP) Is Worth Today?

Shopify makes it easy for entrepreneurs to set up their own online stores. From creating the website to shipping orders to processing payments, it’s a “one-stop shop” for anyone wanting to sell online.

The disruptor reported earnings last week, and business is booming. Today, over one million merchants around the globe are on Shopify. And these businesses sold a record $120 billion worth of goods through its platform last year.

Most folks have never even heard of Shopify. Yet it’s now the world’s sixth-largest retailer—online or offline. It sits just behind DIY superstore Home Depot (HD). And have you checked out Shopify’s stock recently? It’s been on a tear over the past two years, handing investors 600% gains: 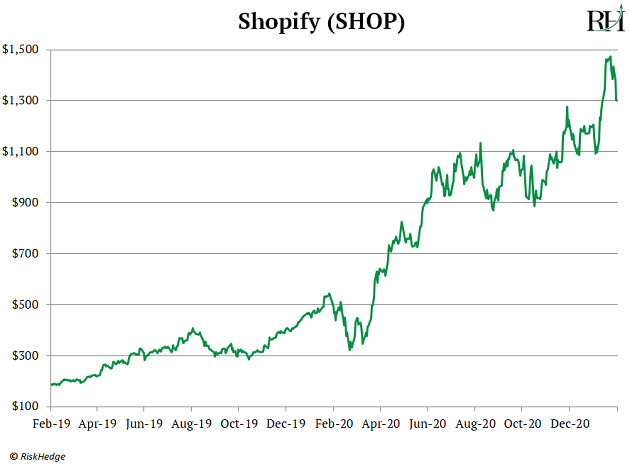 Has The Online Shopping Opportunity Passed You By?

US online sales hit a record $861 billion in 2020, up a whopping 44% year over year. That’s nearly triple the normal rate. And get this: More Americans subscribe to Amazon (AMZN)’s Prime delivery service than voted in the 2016 election, or have a pet.

Folks look at these numbers and assume the opportunity has passed them by. They see the huge gains stocks like Shopify handed investors and think the easy money has been made.

Please don’t make this mistake. I believe we’re only getting started. According to Pew Research, 310 million Americans used the internet last year. But did you know 86% of our spending still happens offline?

In other words, almost everyone is online, but most of the money isn’t. By every measure, only a tiny slice of the economy has shifted onto the internet. Amazon, Google, and Facebook are three of the world’s largest companies. But internet businesses account for less than 10% of the stock market’s total value.

Tech companies make up an even smaller slice of total earnings. My math shows internet disruptors make up just 7% of corporate profits. Here’s the thing: we’re used to ordering books and clothes online and having them dropped on our front porch two days later.

The Internet Has Barely Touched The Largest, Most Lucrative Pools Of Spending

Americans spend more money on groceries than anything else besides housing. But regular RiskHedge readers know the percentage of groceries bought on the internet is little more than a rounding error. 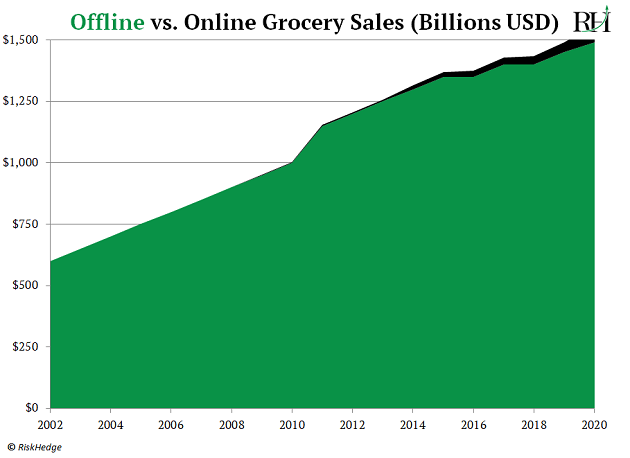 Same for trillion-dollar markets like healthcare, autos, and education. And disruptors are finally breaking into America’s most important industries.

In 2017, online used car seller Carvana (CVNA) was struggling. So it tried to sell itself to industry behemoth CarMax for a billion dollars. CarMax refused. Now Carvana is worth $49 billion: twice as much as its rival. 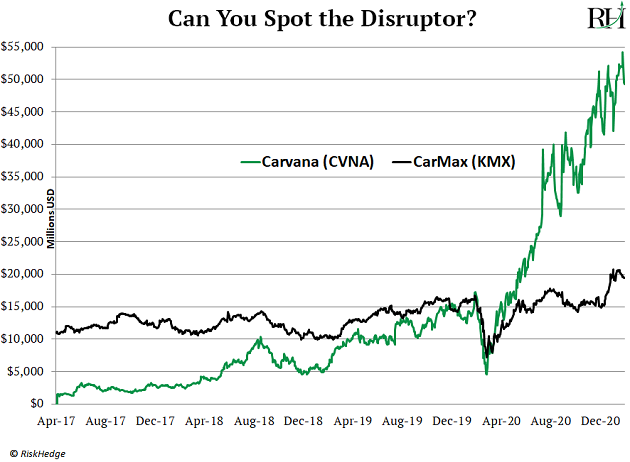 Why is Carvana winning? Its innovative app lets you buy or sell a car in under 10 minutes. Carvana will then deliver it to your doorstep the next day. Or you can choose to pick up the car from one of its 25 giant “vending machines.”

In the past three months alone, Carvana sold more cars than it did in all of 2016 and 2017 combined.

A similar transformation is happening in America’s multitrillion-dollar real estate market. Internet realtors like Zillow (ZG) and Redfin (RDFN) will buy your house. No open houses… negotiation… or waiting months for a buyer to come up with the money.

Type your address into Zillow’s website, submit a few photos, and it will make you a cash offer in a couple of days. In fact, Zillow bought and sold $1.7 billion worth of homes last year.

The internet is even making inroads in America’s most broken industry—healthcare. Teladoc is essentially “Uber” for doctors. Its website connects folks seeking medical care with physicians. You can now get advice from top doctors from your living room. It now has over 50 million paying members.

What If Internet Disruptors Are Only Getting Warmed Up?

Remember, by every measure, less than 15% of our spending happens online. And disruptors are only starting to crack America’s largest industries. In other words, we’ve only scratched the surface on the internet’s potential.

For example, I mentioned Shopify powers websites for over one million mom-and-pop stores around the world. But did you know there’s 30 million small businesses in the US alone? According to IRS data, firms with less than $100,000 in annual sales raked in a combined $2.2 trillion last year. Yet only a tiny fraction of this happens online today.

This means an incredible profit opportunity still lies ahead for us. Folks always think the easy money has been made. For example, I have a friend who thought he “missed” Amazon in 1998 after it jumped 400%. The stock went on to soar another 100,000%+ over the next two decades.

My research suggests internet shopping is only in the second or third inning. Over the next two decades, 50%+ of spending will shift online. Best of all, the transformation is finally happening across trillion-dollar markets like housing and healthcare.

Disruptors like Shopify have a long runway of growth ahead. If it keeps breaking records, the stock could potentially 10X over the next decade. Investors who bet on this trend will continue to be rewarded with billions of dollars in stock market profits. I expect by 2030, we’ll be talking about Shopify like we talk about Amazon and Apple today.