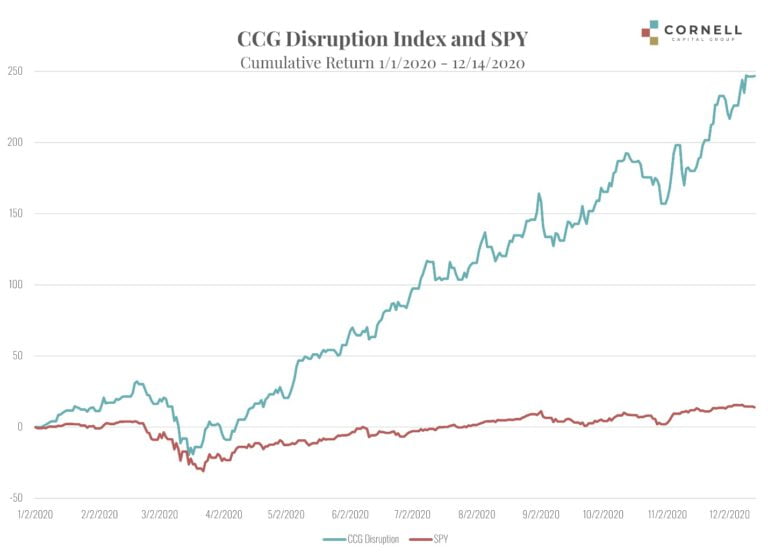 At  Cornell Capital Group we think that simple stock price indexes can provide insight into how the market has moved in the past and maybe even how it might behave going forward. For this reason, shortly after the onset of the Covid pandemic we introduced the CCG Quarantine Index, followed by the CCG Anti-quarantine Index. Now we think a new index can add further insight into the behavior of the market in the era of Covid. We call the new index the CCG Disruption Index.

Even before Covid, the market was becoming focused on a group of companies that were allegedly changing the way business was done in various industries. Examples include Tesla and Nio in the automotive space, NextEra and EnPhase in energy production, Zoom, Netflix, Snap, and Roku in communications/entertainment, Paypal and Square in financial services, Uber in transportation, Zillow in real estate, Teledoc in health care, and recent IPOs Airbnb and Door Dash, among others.

What Isn't Included In The CCG Disruption Index

What we do not include in the Disruption Index are the giant graybeards of disruption, Apple, Amazon, Google, Facebook, and Microsoft. Our thinking is that much of the disruption caused by these companies has already occurred. However, if the companies were added to the index it would have little impact on the results because all of them behaved somewhat similarly to the index. Furthermore, the index is equal weighted so it would not be dominated by the giants if they were added.

In response to Covid, the enthusiasm for disruptive companies has grown greatly. Changes that at the beginning of 2020 were typically seen as distant possibilities came to be viewed as imminent with the onset of the pandemic. As a word of caution, it is not always clear why this occurred. For example, why was the pandemic correlated with a huge jump in the stock prices of electric vehicle manufacturers? Correlation should not be confused with causation. 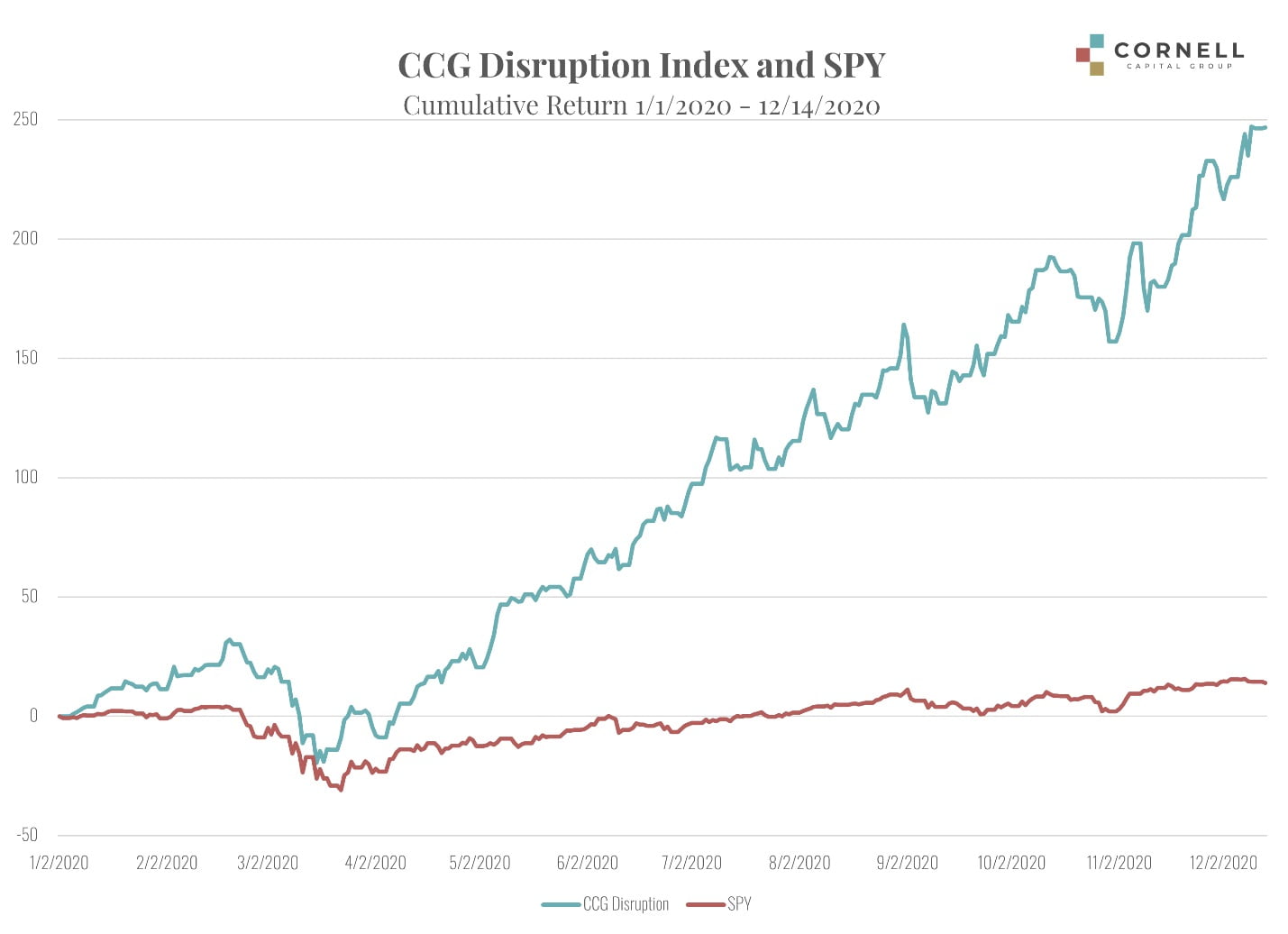 Companies In The Index Have Become Expensive

There is a downside to the extraordinary performance of the Disruption Index during the past year. As a result of the run-up, the companies in the index have become extraordinarily expensive relative to their earnings. As shown in the table below, the current average ratio of price to forecast earnings for 2021 stands at the astonishing level of 199. What is more, even this nosebleed number understates the level of the market enthusiasm for disruptive companies because 56 percent of the companies in the index were forecast to have negative earnings during 2021. Once the earnings of those companies turn positive, their P/E’s would most likely push the average ratio even higher.

The remarkable P/E ratios suggest that the market is pricing stocks in the Disruption Index not only as if disruption can be taken for granted but also as if the current companies in the index will be the ultimate winners. In the past, this has often not been the case. In a previous post, I told the story of VisiCalc, the disruptive company that introduced the first mass market electronic spreadsheet. Not only did VisiCalc fail, but so did the product, a spreadsheet called

“1-2-3”, that replaced it. It was the third iteration of the spreadsheet, Excel, that came to dominate the market. The same fate could befall many of current perceived disrupters. They may well be disrupted by another generation of companies before they produce anything like the earnings necessary to justify their current stock prices.

There are two ways to look at the incredible historical performance of the Disruption Index. One is that it is a harbinger of things to come. According to this interpretation, the future will see a continued rise in the index relative to the general market. The alternative is that the massive run-up in the index represents an overly enthusiastic assessment of the outlook for the disrupters that has been exacerbated by the Covid pandemic. As a result, stock prices for these companies have risen more than can be justified by reasonable forecasts of future cash flows. Of the two views, we favor the second interpretation. Even if the disruption is coming, it is not clear that the currently identified companies will be the long-run winners or that previous incumbents, like traditional auto manufacturers, will not find new ways to compete. If that occurs, the Disruption Index may be in for a disrupting decline.