ValueWalk
Home Business FEMSA – Is “The Most Interesting Company In Mexico” Interesting Enough? 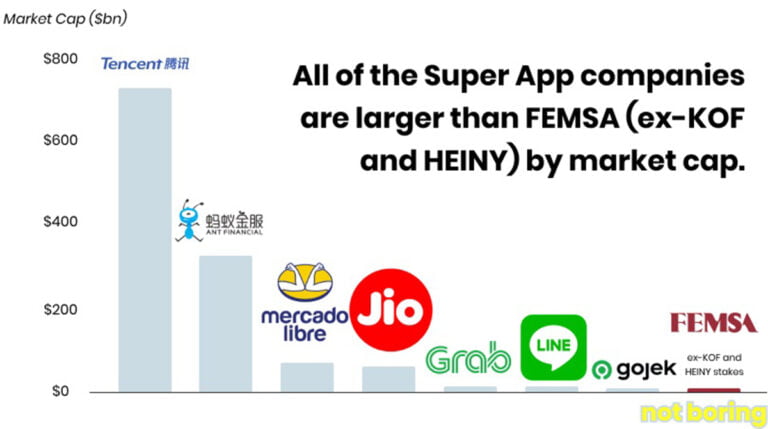 FEMSA – Is “The Most Interesting Company In Mexico” Interesting Enough? by memyselfandi007, Value And Opportunity

Whenever I hear a new name from different quality sources I am highly motivated to look at a stock even if it is outside my usual area of competence. FEMSA is such an example. I have seen FEMSA already in two funds of the “TGV Langfrist” family, it is the second largest position at Profitlich/Schmidlin and finally Swen Lorenz featured FEMSA in his latest weekly dispatch.

He mentions another (very good) FEMSA write-up which calls FEMSA “The most interesting company of Mexico” which is a very detailed write-up and highly recommended.

I try to summarize FEMSA in two bullet points:

The stock chart of the ADR looks unimpressive, basically flat over the last 8 years in EUR terms after a huge rebound from the GFC:

A Very Quick Sum Of Parts Valuation At FEMSA:

Doing a "sum of parts" valuation at FEMSA is not so easy because they don’t provide a detailed segment reporting, but using 2019 annual reports, I “deconsolidated” Coca Cola FEMSA with their report. This is the summary of my calculation:

So the “stub” which is FEMSA’s Commercio segment is valued implicitly at 11x EV/EBIT. Looking at comparable businesses, a 15-20 EV/EBIT would be justified which would result in a potential “sum of part” upside of somewhere between 16-36%.

At first sight, this is more or less where a conglomerate discount for a slightly intransparent/complicated Mexican conglomerate should be.

First, both, Heineken and Coca-Cola could be undervalued. Heineken is a good company but I haven’t looked deeply into them. Heineken’s share price is pretty much where it was one year ago however 9M top line is -8% yoy, so there is no obvious “covid-19” discount. Coca Cola FEMSA still trades below pre Covid-19 levels but I have assumed a 30% control premium anyway and Coca Cola FEMSA doesn’t really move the needle that much.

Second, we have the “super App” story. This is what the US blog writes:

Building the digital wallet is a multi-billion opportunity in its own right. But it also means grabbing the lead position to add more services and build the leading Mexican, and potentially Latin American, SuperApp. Latin America is fertile ground for Super Apps because of its underdeveloped infrastructure and unbanked population. It’s less like the United States, which may be past the point of Super Apps, and more like Asia, where multiple Super Apps sit at the heart of multi-billion dollar companies.

Indonesia’s Gojek is valued at $10 billion, nearly half of FEMSA’s valuation and more than FEMSA’s stub ex-Coca-Cola and Heineken stakes. Indonesia’s GDP is nearly 20% lower than Mexico’s. Gojek is backed by Chinese giant Tencent, whose own Super App, WeChat, is the key to its $726 billion valuation. Also in China, Alibaba spin-off Ant Financial’s digital wallet/SuperApp, Alipay, was preparing to go public at a market cap north of $300 billion before the Chinese government scuttled its plan. That’s over $1 trillion in market cap driven by Super Apps, in just one country.

And then there’s India, where Reliance raised over $20 billion for Jio at a $60 billion valuation, including $5.7 billion from Facebook, in part to grease the wheels for WhatsApp to become the Super App there. Earlier this month, it began rolling out WhatsApp Pay, a big step towards realizing that vision, and confirmation that in emerging markets, partnering, instead of competing, with the local powerhouse is smart business.

There’s a long way to go between where OXXO Pay is today and what even Gojek, Grab, or Line offer, and the larger Super App companies like Tencent, Ant, Mercado Libre, and Jio are a lot more than a Super App, but those companies success show the bull case for FEMSA. Given that the core business is already undervalued, OXXO’s strategic position in the value chain means that investors have a free option on a $10+ billion opportunity.

I fully agree that these days a story alone can move stocks to extremely high levels. However fundamentally i have an issue especially with the peer Group.

The companies from the peer group that I know at least to a certain extent (Tencent, Ant Financial, Grab and Gojek) have one major difference vs. FEMSA: These are all “digital first” technology companies. Yes, being emerging market players they needed to develop an online/Offline business model, but the companies themselves are pure tech companies  with all required capabilities and competitive advantages against “legacy” players. In none of these markets any “legacy” player had any chance to play a role of becoming a “super App”. The only exception is JIo, which is part of the Ambani empire but was founded as a Mobile Telecom company which again is at the core a tech business.

Just having a lot of convenience stores and a “low tech” prepaid debit card with 10 mn+ users does not guarantee any success in becoming the leading digital financial ecosystem in Mexico. Plus, the way to a “super app” dominance has been very different in many countries. Tencent started out as a Whatsapp Clone, Grab and Gojek are ride hailing platforms. In Brazil for instance, with a relative similar proportion of unbanked inhabitants,  the leading emerging fintech players for the “unbanked” are the digital Neobanks with Nubank being the clear leader, having reached 25 mn customers in a few years time.

Mexico is a little bit behind but already a few Neobank players were in the market in 2019. Nubank has already launched in Mexico and is pushing very hard into the market.

To be honest, I have no idea how good FEMSA/OXXO are on the tech side, but so far I cannot think of any “traditional” company anywhere on the globe that has made a successful move to become a leading (Fin)tech player. Maybe FEMSA will be the one but I can’t see it. Therefore I would allocate no value to this “option” as I think this option is at the moment extremely far out of the money and they would need to execute very good and very fast to become a Fintech player against some pretty tough competitors.

Based on my calculations (which might be wrong), the discount of FEMSA’s current valuation to a sum-of-part calculation is somewhere in the range of 16-36%. In my opinion and for my risk appetite, this is a pretty normal “discount” for a relatively complicated Emerging Markets conglomerate.

The company seems to indeed interesting and well run, but for me, a discount would need to be higher to compensate for some additional EM related risks and my lack of experience with the Mexican economy and stock market.

As mentioned above, the “Super App” story could actually lead to a rally in the stock price if enough investors believe it but I am not so sure that they can execute. So what you get with the FEMSA stock is clearly an option of an “equity story” but I am not a “story investor”.

Nevertheless I will put FEMSA on my “core” watch list. If the discount becomes bigger or if they actually do something with the Heineken stake, the case could become more interesting. I would also be interested if any readers have more information about the tech organization and capabilities of FEMSA/OXXO(is this a separate unit and at par with leading players like Nubank etc.) . I would also be interested from a Mexican point of view how potential customers see these players and whom they actually would trust with a digital wallet which is often a problem in Emerging Markets.