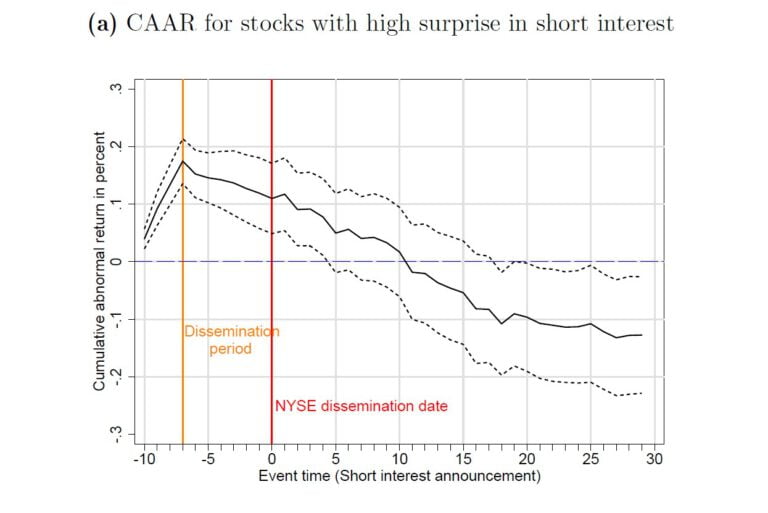 We extract the news component of short-selling activity by accounting for important cross-sectional, distributional differences in short interest. The resulting measure of surprise in short interest negatively predicts the cross section of both U.S. and international equity returns. Our results also indicate that this predictability originates from short sellers’ informed trading on mispricing and the market’s underreaction to the news component of short-sale reports. Consistent with the notion of costly arbitrage, the return predictability is stronger among illiquid, volatile stocks and stocks with high information uncertainty, but importantly, unrelated short-selling frictions.

Short selling has become an essential feature of arbitrageurs' trading strategies. The average level of shares shorted has rapidly increased over recent years. This phenomenon has been related to an increase in capital devoted to arbitrage strategies but also to the expanded use of short selling for market making and hedging activities. An increase in supply of lendable stocks is driven by the growth of institutional ownership (Lewellen, 2011).

This paper studies the informational role of short sellers in the equity market. Many recent studies have examined the ability of short sellers to detect deviations of stock prices from fundamentals and to arbitrage them away. Although most of these studies find evidence that suggests that there is informed trading by short sellers, there are three major concerns. First, the key measure of short sellers' positions employed in the literature is the level of short interest ratio (i.e., shares shorted relative to shares outstanding). However, as argued by Asquith, Pathak, and Ritter (2005), for instance, the negative relation between short interest ratio and future stock returns is also consistent with Miller's (1977) view that short-sale constraints impede the trades of investors with negative beliefs, causing stocks to be overvalued. In other words, stocks that are already heavily shorted are the most
difficult to short and are consequently overvalued. Overpricing, in turn, mechanically leads to future negative returns. Second, even if the short interest ratio does reflect arbitrageurs' view on stock prospects, profits from following this view might be captured by high lending fees (Drechsler and Drechsler, 2016). Finally, using similar arguments to those used in the literature on institutional trading (e.g., Bennett, Sias, and Starks, 2003), if short sellers can forecast returns, then cross-sectional variation in future returns should be related to changes in the short interest ratio as a proxy for informed short selling. However, previous research provides at best inconclusive evidence on the predictive power of changes in the short interest ratio for stock returns after controlling for the level of short interest ratio (Boehmer, Huszar, and Jordan, 2010).