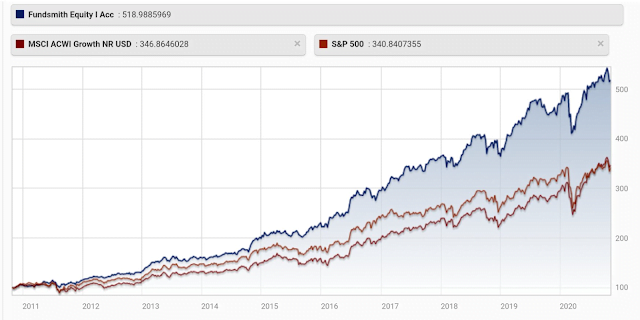 I have often been asked to name my best idea by people who have not heard much about me apparently. Regular readers know that I am a very big fan of diversification. I like owning a lot of quality companies, purchased at attractive valuations, which I can then hold on for decades. I rarely sell. The only factors these days that would cause me to sell are a dividend cut or an acquisition in cash. I invest money to work every month, and I do not have an upper limit on the number of companies to hold.

That being said, I always strive to improve upon my process and expand my circle of competence about different companies. It is great to expand my toolkit, and checklist to incorporate different criteria to include when evaluating companies, their moats and qualitative as well as quantitative characteristics. I review different companeis from different industries, and follow different investors with different investment styles. One such investor that I have been studying is Terry Smith from British fund company Fundsmith. I will have to do a more detailed review of Terry’s investment style in the future, but I will just let you know that he is a great investor with a fantastic track record. 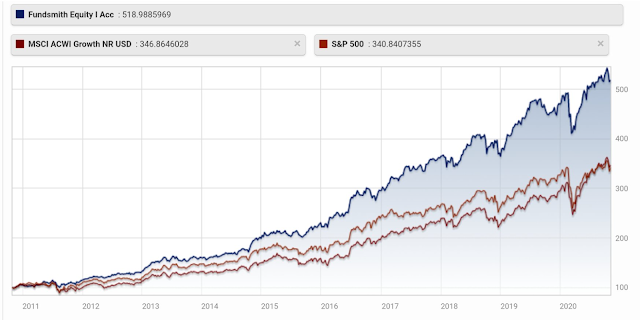 His head of investment research is Julian Robins. The company holds annual meetings with shareholders, which are recorded and uploaded for everyone to see on the internet. I really enjoyed the 2018 meeting. In it, Julian Robins discussed the factors he would look for if he were to select a company that he would put all of his net worth in, and a company that should provide for several generations of his offspring. Naturally, this discussion is very helpful.That’s because it approaches investing as a way to buy into a business to hold in a family for generations, rather than a speculation that treats stocks as lottery tickets.

You can view it starting in minute 59 of the video. But here is a rough transcript I put down for easier viewing:

“If you had to own just one company for 50 years

You have to start looking for certain characteristics

First of all you want a big market

You wanta company which is number one in that big market

My company is L’Oreal SA

So if you think of the cosmetics market I mean

We all want to look good

Your market is basically seven and a half billion people

L’Oreal SA is the number one player, but it does 26 billion euros of sales per year, it’s got a 12% market share

It’s got a family control, which is good because it means it is not gonna do dumb things

The numbers look great, the market always grows even during the financial crisis the cosmetic market generally goes well

It’s got eight brands of over a billion in sales

It’s got positions in all parts of the market

I think that this is a fantastic mental model to have in mind. I also like the example being used. This model could be replicated and used when evaluating future investments.

An Individual Investors Should Be Diversified

That being said I wanted to mention that I disagree about concentration. I believe individual investors should be diversified, and not limit number of holdings they own. I am biased, because my best ideas were after what I believed to be my 20 best ideas. I also know enough to state that out of 100 companies I may own, I could not tell you which would be the best and which would be the worst ideas as seen from the year 2050. While it is an interesting idea to ponder about the type of business you would hold if you could own just one business, in reality we can own as many businesses as we can find. So please do not view this as an article telling you to own just one business. It is mostly a mental model for the types of factors to look for in evaluating quality businesses for a diversified portfolio.

It does seem to be part of their Fund Smith Portfolio: 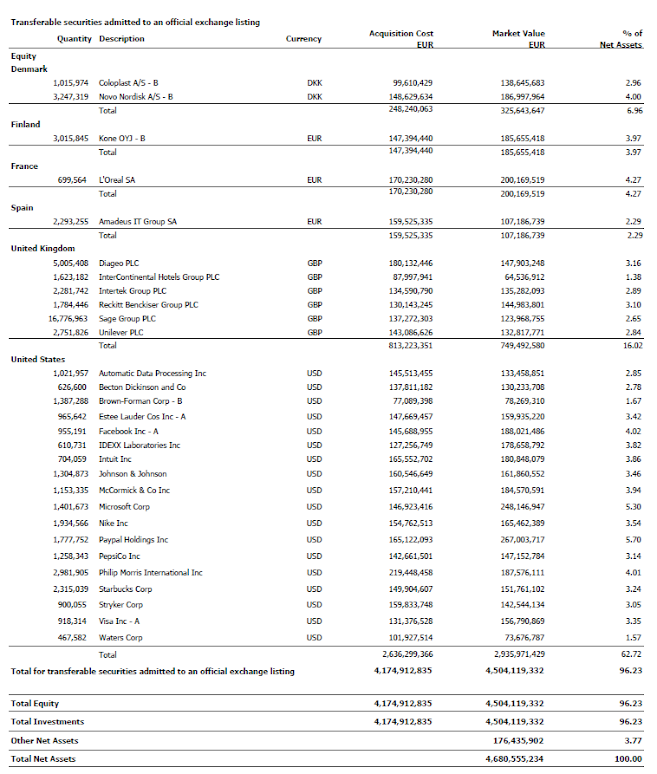 While great investors can concentrate in their 20 or 30 best ideas, I believe this to be riskier for ordinary investors who may not have the skillset to pull it off. After all, life is easier with a margin of safety. You only need to get rich once. There is no reason to take too much risk with money that is important for you, to make more money than you may need. You do not want to go back to go.

To add to the model, Terry Smith is known for his three factor approach to investing:

It basically means to acquire quality companies at good valuations, and then sit tight, while waiting for the power of compounding to do the heavy lifting for you.

L’Oreal SA was an international dividend aristocrat, but sadly it lost the noble title in 2020 after it kept dividends unchanged due to Covid-19. I think that it can easily keep raising dividends in the future, based on the growth vectors listed in the transcript above. 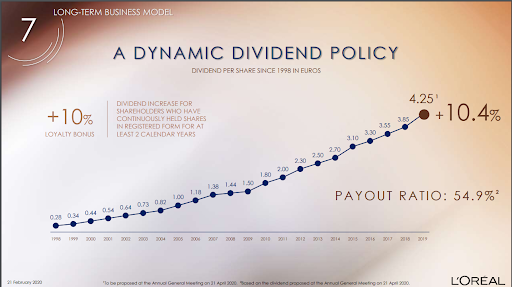 It does have a lot of tailwinds going in its direction however, so it would likely be more valuable 20 – 30 years from now. Hopefully it won’t be mismanaged badly by then. But even so, a great business can usually recover easily from a period of mismanagement.

Now, L’Oreal SA is a great quality company. The problem is that it is often overvalued. The problem with quality companies is that they are often seen as overvalued. However, the market usually misprices these companies. I believe that a company with durable brands and sustinabale earnings, coming from repetitive purchases that would grow over time will most probably grow earnings over time.

Particularly when it reinvests back into the business in projects that have high expected rates of return.

This would result in higher earnings over time, and higher dividends for shareholders out of that excess cashflow being generated over time. All of this would make the business even more valuable over time.

When you have branded products that the consumer wants, and which have inelastic demand, you can afford to increase prices and your business is somewhat immune from the economic cycles. Therefore, a company with a P/E of 30 that grows earnings at 6%/year for 30 years would be cheaper than a cyclical company with a P/E of 10 that may or may not grow profits over time by more than the rate of inflaiton.

I read some research recently that the market is very poor at recognizing the longevity of cash flows from successful consumer staples companies.  If properly handled, consumer brands should be able to last for generations and thus sustain their competitive advantage and the superior returns that bring over time. 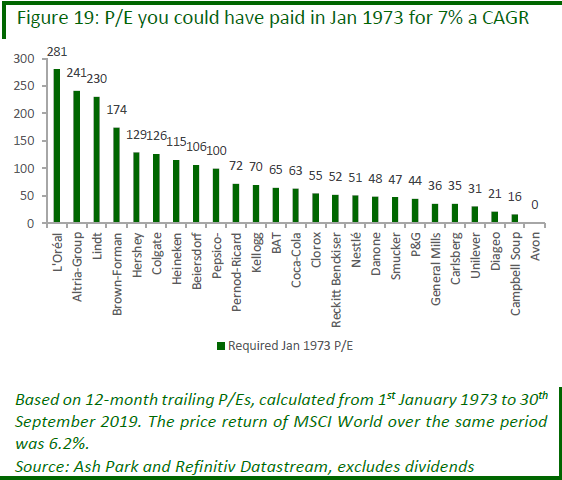 A researcher went back to 1973, and asked themselves what would have been the highest P/E they could have paid for a quality consumer staple that year, and still earn 7% annualized return ( before dividends). They found out that they could have paid 281 times earnings for L’Oreal SA in 1973 or 241 times earnings for Altria, and still generated 7% annualized return (before dividends).

These companies were not selling at such high valuations of course, and adding dividends would have further turbocharged returns. This just goes to show you that the future growth expectations may be lower than actual growth.

That doesn’t mean to go out and buy a stock at any valuation of course, since the future is uncertain. What worked in the past may not work in the future, so a margin of safety should be required in terms of valuation and diversification. However you should never forget that valuation and growth are attached at the hip in a solid value investing framework. You should always look at P/E in conjunction with earnings stability and growth.