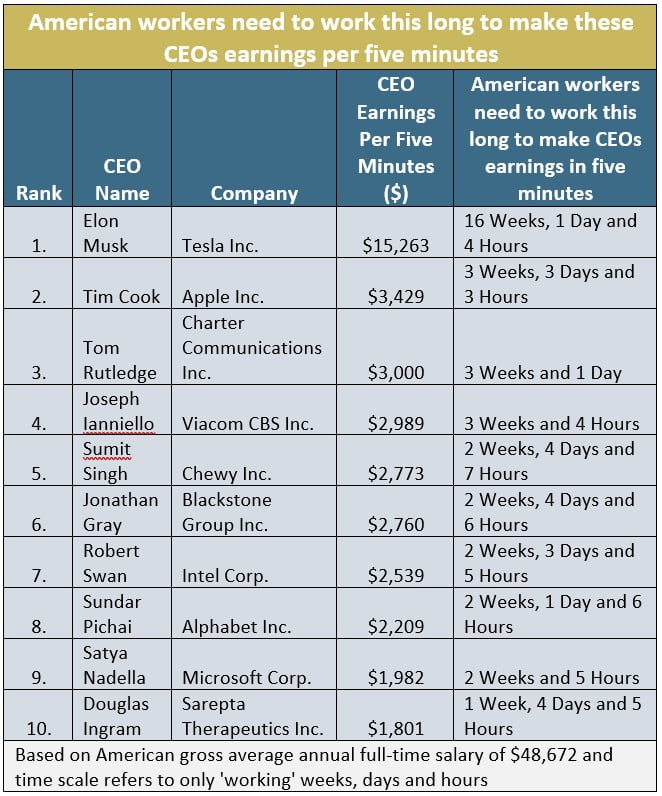 The biggest CEOs worldwide earn astronomical sums of money each year. People often question if these titans of industry merit the salary they receive - some feel it is deserved given the huge responsibility on their shoulders whilst others simply consider them ‘greedy fat cats’.

Interested in CEOs earnings, Gigacalculator.com identified the 10 highest paid CEOs in the world and then utilised their salary to hourly calculator to work out how long it would take Americans to make what each CEO does in five minutes.

Gigacalculator.com found that Americans need to work an astonishing 16 weeks, 1 day and 4 hours to make what Elon Musk does in five minutes ($15,263). To put that into context, the Tesla maverick in five minutes can buy 90 return flight tickets for New York to San Francisco.

In second place is Tim Cook, as it would take Americans 3 weeks, 3 days and 3 hours to earn the same amount the Apple CEO does in five minutes ($3,429). In the space of five minutes, Cook can buy three iPhone 12’s without breaking a sweat.

Tom Rutledge is in third position. To bank the $3,000 the telecoms tycoon makes every five minutes, American workers would need to labour for 3 weeks and 1 day.

Interestingly, Americans would have to spend 2 weeks, 1 day and 6 hours to accumulate the same five-minute income as Sundar Pichai ($2,209), the head of Google subsidiary Alphabet Inc.

Just below Sundar Pichai in ninth place is Satya Nadella. Americans would have to work for 2 weeks and 5 hours to gain the $1,982 the Microsoft chief makes per five working minutes.

Out of the highest paid CEOs, it would take Americans the least amount of time (1 week, 4 days and 5 hours) to make the $1,801 Douglas Ingram enjoys for every five minutes he spends working.

The study found found that:

For America, calculations based on gross average annual full-time salary of $48,672.