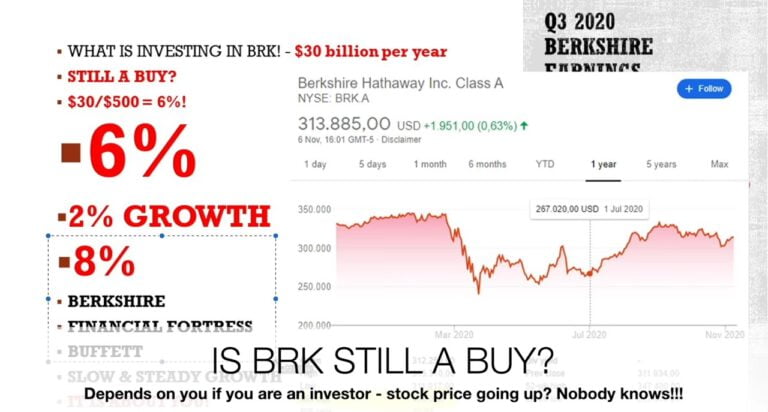 Warren Buffett just bought $9.5 billion of Berkshire stock and another $15 billion of other stocks that we don’t know yet. Next week we will. Berkshire’s Q3 2020 earnings report just came out and it shows that Buffett’s stock to buy, the undervalued stock on the market, is Berkshire stock. Is it Berkshire stock still a buy? The following gives the answer:

As for whether Berkshire stock is a buy now? The answer depends on you, carefully explained in the video. The first thing you have to answer is whether you are an investor or not.

Good day fellow investors. Berkshire's Q3 2020 earnings just came out those usually come out on a Saturday. So Warren wants to give you time to read them. So here we are. I have done that we'll go through the earnings. And I'll give you the most important things from the earnings, very interesting things about buybacks, the impact of buybacks, the earnings, what investing in Berkshire is, and whether Berkshire is still a buy. That is usually the most common question when I make a Berkshire video. I have made many Berkshire videos. So if you like Warren Buffett and Berkshire, please click that like button and subscribe to this channel. And I have discussed very often how the returns are good 10% expected how the Berkshire stock is undervalued, how nothing will change, I'll put all the links of this video in the description below so you can enjoy them if you're interested into knowing more about Berkshire and investing in Berkshire. But let's go back to the current story is the most important things coming out of the Q3 2020 Berkshire earnings. And we have now a market capitalization of 500 billion, which is a nice round number to make calculations and see what is the expected return you get from investing in Berkshire at current levels. Of course, now the stock price is higher at 313,000. Much higher than it was during the march lows and that quarter. So of course, as the stock price is higher, the returns are lower. And you have to see how those returns fit you.

Berkshire did significant buybacks in Q3. So also Warren Buffett thinks that Berkshire is undervalued, he confirms that thesis because he spent 9.3 billion on buybacks, which is almost double what base he spent in Q2, and much more than what he usually spent on Berkshire buybacks. So big, big impact from Warren Buffett buying Berkshire stock. And given the situation we see that the number of shares went down even in October. So in the first 26 days of October, Warren Buffett spent another 2.3 billion on buybacks. So he is really pushing on buybacks. And we'll see when will he stop. Because when he stops, it will mean that Berkshire is, let's say, fairly valued. But he didn't buy just Berkshire, he acquired 15 billion of Berkshire stock during the last 9 months. But if we look, he also bought 22 billion of stocks. He also sold 28 billion of stocks. We made the video discussing his airlines stock sale, and other sales. But what's most important in this quarter is that Warren Buffett actually if you look at the purchases of securities over the first 9 months, and the first 6 months, the difference is approximately 17.5 billion. So Warren Buffett bought stocks for 17.5 billion other stocks, not just Berkshire in Q3, and he sold about 13 billion in Q3, it was 15.7 billion here. And total sales are 28 billion we'll see in the 13f report that comes out around the 15th of November. So 45 days after the quarter has ended, we'll see what have been the sales and the purchases, we might make another update video if you like this one. So that will be another interesting thing. But most importantly, Buffett acquired 15 billion of Treasury stocks 6 billion in the previous 6 months 6.7. So he added the 9 billion as we already mentioned,.

And now the video I released on Saturday discussing Professors Gabaix and Koijen, inelastic market hypothesis tells us why Berkshire can't do many more buybacks because he spent nine billions on Berkshire buybacks. And because Berkshire is heavily owned by funds, mutual funds, just Vanguard, BlackRock and others own 20-20 something percent of Berkshire other funds, plus Warren Buffett owns 40% something. So Berkshire is a very inelastic stock. And when you spend 10 billion, 15 billion on an inelastic stock, this is what happens. So if we look at Berkshire over the quarter where Buffett spent 9 billion in buybacks. Berkshire outperformed the S&P 500 July Berkshire almost 10% up, S&P 500 5%. August, Berkshire 11.5% up, S&P 500 just 7% up. September, Berkshire down -2.3%, S&P 500 -4%. October seems that the impact of Buffett buying back wasn't that good or the S&P 500 was pushed higher by other things. However, we see that when Buffett goes big on buybacks like he did in Q3 2020, the performance of the stock is significant, because when you put 9 billion, there is simply not enough supply for that. And Buffett knows it. And Buffett knows that he must refrain from amazing buybacks, because if not, he'll just push the stock higher and higher. This is inelastic market hypothesis on a really inelastic stock, like Berkshire because the ownership is really concentrated and owned by long term investors.

But then when it comes to investing in Berkshire, is it still a buy? Well, first, when it comes to investing, you are investing in a business that has earnings. And if we look at net cash flows from operating activities, over the first 9 months, it was almost 30 billion, even higher than in the first 9 months of 2019. Okay, they did some purchases of property, plant and equipment, the investments needed to keep businesses going, perhaps even grow a little bit. So they are at 20 billion in cash flows. At the end of Q4, they'll likely be at around 30 billion in cash flows. And if I look at their operating profits, those are a little bit down over the COVID crisis compared to 2019. But still operating profits are strong and high at around 5 billion when the recession passes when there is again, economic growth, this will again go higher, higher and higher. And if you invest in Berkshire, and if you're a real investor, you invest in this you invest in profits, you invest in cash flows, this is what investing in Berkshire is. And then you compare this cash flows earnings of 30 billion per year. You compare it to the stock price of 500 billion. So 30 billion divided by 500 billion is 6%. That is what you can expect from investing in Berkshire now, perhaps 2% growth, inflation, reinvesting, we are at 8%.

Is Berkshire Still A Buy

Is 8% something good for you? It's Berkshire is a financial fortress. It's Buffett. We discussed also what will happen after Buffett. Slow and steady growth at 6%, 7%, 8%. Getting rich slowly. So the answer whether Berkshire is a buy or not. It is about you not about whether the stock will go up or down. The stock will go up or down depending on what Buffett does. If Buffett does more buybacks, the stock will go up because then funds will see Buffett doing buybacks and push it higher, but that's not investing. Warren wants Berkshire stock to go lower so that he can do more buybacks and there are many more selling so that he can make better returns on those buybacks. So investing in Berkshire is about you, this is what you can expect. Nobody knows whether the stock will go higher or lower. This is investing if you're investor please subscribe and click that like button.