1) Following up on yesterday's e-mail about Berkshire Hathaway's (BRK-B) 13F regulatory filing, which showed the stocks it bought and sold during the third quarter... I also like reviewing the activities of other investors I respect, so I read with interest the summary of the 13F activities of 57 investment firms, mostly hedge funds (see the full list here).

While plenty of stock moves caught my eye, such as the legendary Seth Klarman of Baupost buying into the initial public offering ("IPO") of Pershing Square Tontine Holdings (PSTH), I want to focus my comments here on the amount of activity – in particular, how many stocks did each manager trade during the quarter?

This is important because, as my colleague Enrique Abeyta has correctly observed, the best way to achieve long-term investment success is to either trade a lot or almost not at all. Pick one extreme or the other, but for sure don't get caught in the muddled, messy middle...

For each of the 57 managers I examined, I counted the number of stocks they traded during the quarter – new positions, exits, additions, and reductions – and put together this chart, which shows the 12 least active managers: 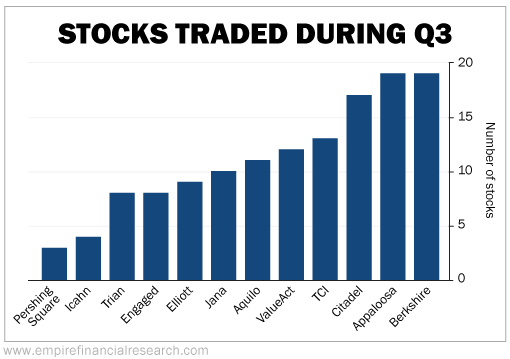 I think it's fascinating that two veterans, Bill Ackman and Carl Icahn, traded fewer than half the number of stocks of any other manager – and far fewer than the 19 stocks Warren Buffett, Todd Combs, and Ted Weschler traded at Berkshire Hathaway. Of course, Ackman and Icahn manage smaller, more concentrated portfolios... but it still seems like they're more closely adhering to Buffett's famous "20-slot rule" than even Buffett himself!