1) When we launched our first newsletter, Empire Investment Report, on April 17, 2019, we told our subscribers to build a solid foundation for their portfolio before they started buying the higher-risk-but-hopefully-higher-return smaller stocks that we'd be recommending.

As you can see in this table, these stocks have, collectively, nearly tripled the return of the S&P 500 Index since then (using prices as of 9:45 a.m. this morning):

Since our initial recommendation, both Facebook (excluding the one-time $5 billion payment to the Federal Trade Commission for its role in the 2018 Cambridge Analytica scandal) and Amazon have grown their trailing-twelve-month free cash flows by more than 50%, which makes Google's robust 19% growth look weak!

And it doesn't look like they're slowing down anytime soon...

The chart below shows Amazon's third-quarter revenue since 2009 (blue bars), with the percentage growth (red line). It's astonishing to see revenue growth accelerating as such a large company! 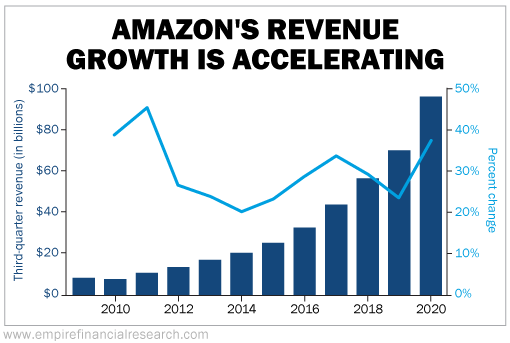 I remain as bullish as ever on these stocks... and we'll update subscribers further in our next issue of Empire Investment Report. If you aren't already a subscriber, you can sign up right here.