In Michel Houellebecq’s 2015 novel Submission, France becomes an Islamic state under a president named Mohammed Ben-Abbes. At the time, the novel seemed dystopian; now, after the Netflix (NFLX) release of Cuties by the French-Senegalese director Maïmouna Doucouré, it seems aspirational.

“Cuties” not only includes many close up shots of little girl’s crotches and butts, the film also shows little girls discussing sexual acts, watching pornography, depicts a child photographing her genitalia, and more.https://t.co/HNPmnq9aaB

Left-leaning writers such as Slate's Sam Adams have defended Cuties (and, in a weird bit of projection, claimed its conservative critics are "creepy"). Nevertheless, the film sexualizes prepubescent girls, as Mary Margaret Olohan explains above.

In the interest of full disclosure, I should note here that Portfolio Armor is currently bullish on Netflix (NFLX). Our security ranking algorithm is amoral, and makes its selections based on its analysis of total returns and options market sentiment. If you look at our top names page, you'll see that Netflix appeared in our first live cohort more than three years ago. It was a top ten name again on Monday. 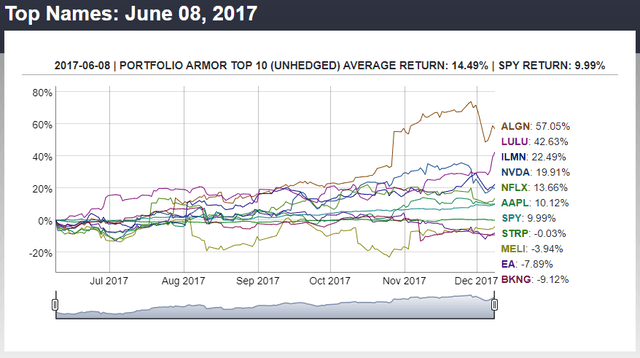 One bright spot for Netflix (NFLX) bears, though, is that the performance of our top names recently fell behind SPY. Another bright spot is the #CancelNetflix movement.

As ZeroHedge has noted, outrage over Cuties has led to calls to cancel Netflix.

Maybe This Time Is Different

I'm generally skeptical about the impact of boycotts on dominant companies, but maybe this time is different. As Fox Business reported on Monday,

YipitData, a global research firm, told FOX Business that Netflix's churn, or the amount of customers who choose not to renew their subscription, began to substantially increase following the film's release.

As of Saturday, the firm found that Netflix's daily churn reached a multi-year high that was nearly eight times higher than levels observed by the firm in August.

In case this time is different, below is a short video on how to hedge Netflix if you are a cautious bull.