ValueWalk
Home Business Gold to Silver Ratio Today, What Is It?

If you buy gold and silver, you may have heard about the Gold to Silver ratio here and there. Many investors enjoy using this ratio to determine if gold or silver is a good buy or sell at the time. But why does it matter that the Gold to Silver Ratio today has mostly stabilized in comparison to earlier in 2020? What does this really mean?

Firstly, the Gold-to-Silver ratio is basically the amount of silver it takes per ounce to buy one ounce of gold at the spot price. Now usually you cannot buy any precious metal at spot because you must account for premiums—the cost for making the product. The highest amount for the Gold to Silver ratio on record was 1:124, meaning that it took 124 ounces of silver to match the dollar amount of 1 oz of gold. This record-breaking level actually happened this year in March. 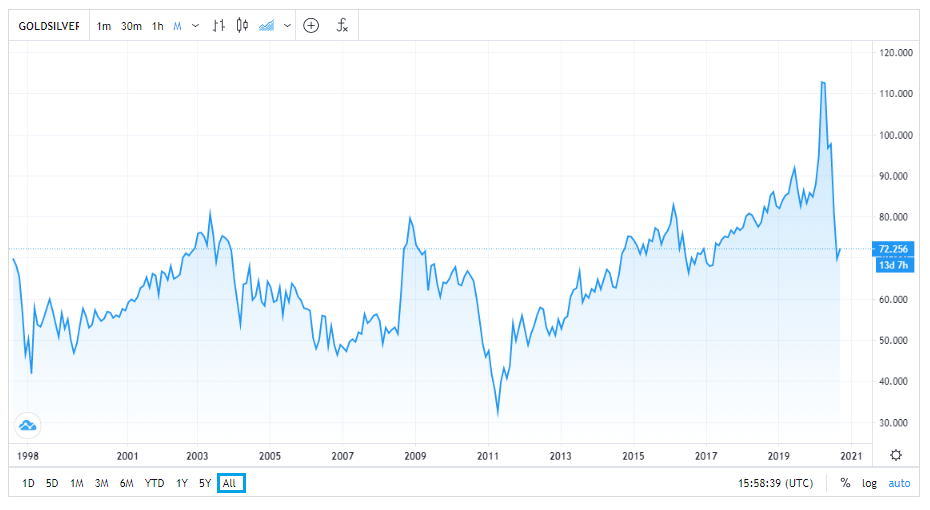 It is worth noting that silver and gold tend to have a direct relationship. This basically means if gold prices turn positive, so too will silver. You might not see this reflected immediately, but eventually, you will notice if gold spikes, then silver will also start to rise soon after. The reverse can also happen: if silver increases, gold most likely will as well, and if either plummet, then so will the other. If you have noticed this, then you already have a great understanding you can use for when you want to buy gold and silver.

How to Use the Gold to Silver Ratio

So, the Gold to Silver ratio is an indispensable tool for many investors because it helps determine if one metal is about to rise or fall in comparison to another. But also, it can be a great tool that you can use to determine if something is over/undervalued at the time. Take a look at this video showing a direct comparison with US Mint Eagle coins earlier in the year to last week. The value of silver has strengthened over the past few months, and the value of gold has stabilized as well. This is reflected in the comparison between silver in March and silver last week. Keep in mind that this does not account for premiums.

Why Are Gold and Silver Connected?

But why do gold and silver trade at the hip instead of platinum or palladium? Simply put, it’s because more investors usually turn to silver because it is a more affordable option to gold. Both metals are the more popular choices for their history. So, people buy silver when gold is increasing. But this also means when gold suffers and is sold off, people also sell silver. Investors often find the silver-to-gold ratio helpful. This is because it helps them determine whether it’s a better deal to buy or sell at a given time.

Keep in mind that most traders actually use the ratio for acquiring more metal as opposed to a dollar-value profit. So, investors tend to use this to switch holdings when the ratio swings between extremes. If the value of silver to gold drops to 50, it might be worth it for the investor to trade in 50 oz of silver for 1 oz of gold! This way, you can maximize your precious metal holdings.

What Determines the Gold to Silver Ratio Today?

In the past, the government used to regulate the Gold to Silver ratio because currency used to depend on it. Since the US, and most of the world, moved off of the gold standard, this is no longer the case.

Prior to the 20th century, the Roman Empire had the Silver to Gold ratio set between 12:1 and 15:1. The US in the 1800s took on the bi-metallic standard monetary system. Basically, this meant the value of the US’s monetary unit was connected to the mint ratio. Eventually, this gave way to the gold standard, in which currency was once backed by gold.

So, if the US set the price of gold to $1000/oz, then one dollar would be 1/1000th an ounce of gold. But today, no major government backs their currency with the gold standard. The US started to abandon this standard to fight the Great Depression, and even stopped striking gold coins for circulation. This is because the gold supply was constantly depleted and the government had little control over stimulating the economy. This was owed to the fact that the gold supply was limited and could not be replenished at a faster rate. In turn, the limited supply hindered the regrowth of our economy, which is one major reason the economy took so long to recover. However, the gold standard also prevented the economy from growing too fast or facing major inflation.

Now, market forces alone determine the Gold to Silver ratio today. This is why the price of gold or silver can vary depending on external factors. For example, the US election always turns precious metals positive for some time given the uncertainty of the near future. Also, if the stock market turns positive, usually precious metals fall because people sell their assets to join the boom.

What is the Gold to Silver Ratio Today

In 2020, the spot gold price rose above $1700, then $1800, and briefly at $2000. Then it settled back down and continues to balance in the $1900-dollar level. Silver this year had a remarkably low price in March, hence the incredible ratio with gold. In the months following March, silver has reached highs around $27 and above. So, the Gold to Silver ratio on September 21 was around 77. 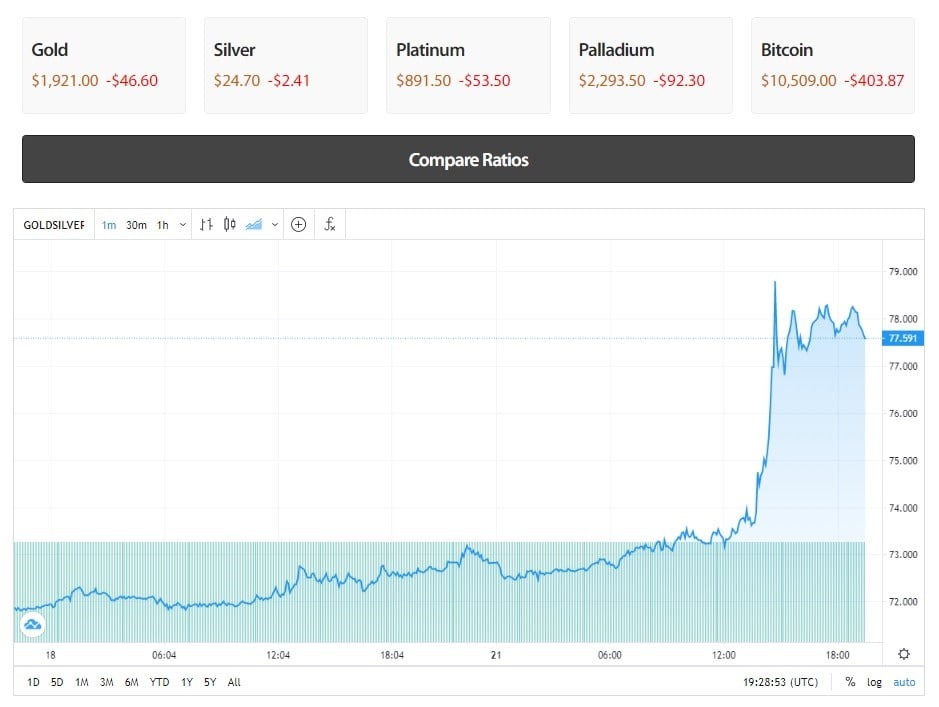