An Update On Tesla, Elon Musk's Reckless And Immature Behavior

This extends the company's lead as the world's most highly valued automaker, despite producing fewer than 5% of the cars as the former No. 1, Toyota Motor (TM), and 5% fewer cars in the second quarter than the same period last year.

While I have to tip my hat to CEO Elon Musk, if I were long the stock I'd be worried that the stock's incredible run has gone to his head...

Last week, he tweeted a crude taunt at the U.S. Securities and Exchange Commission ("SEC"):

Then he doubled down, tweeting about Tesla selling red satin short shorts on its website: 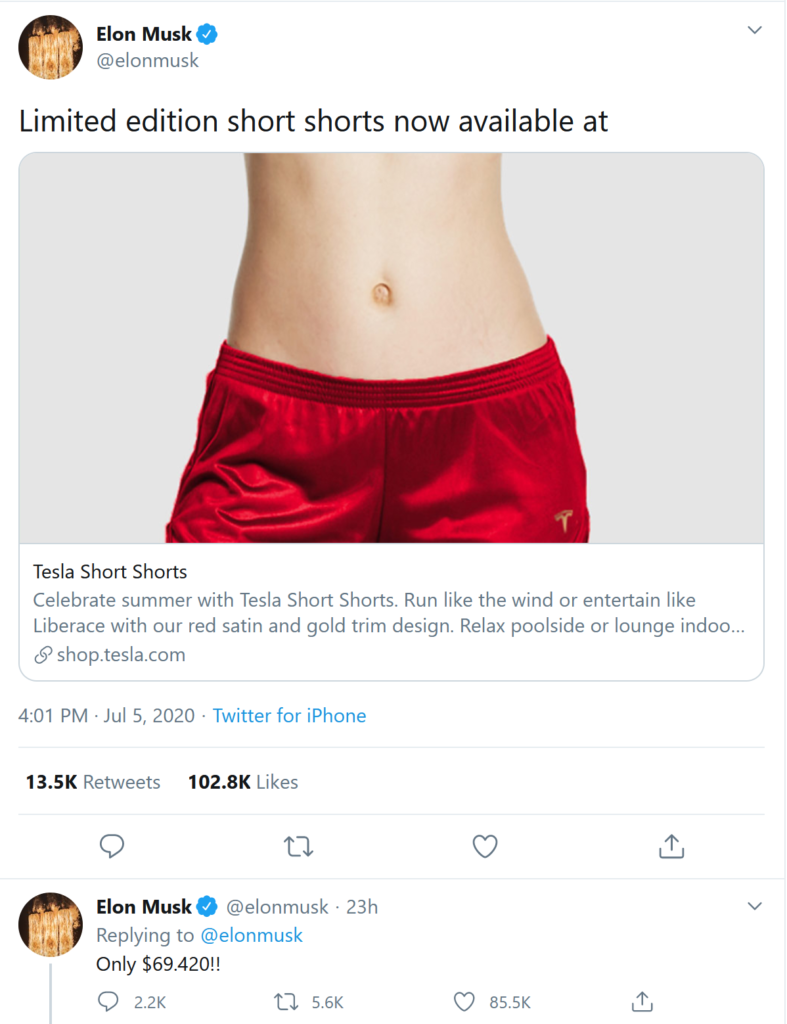 Here, Musk is mocking not only short-sellers but, again, the SEC, by pricing the shorts at $69.420 (the 420 being a reference to the $420 per share price at which he considered taking the company private in 2018, according to a tweet that got him sued by the SEC).

As if that wasn't enough, he said he was going to send the shorts to the SEC, which he called the "Shortseller Enrichment Commission," in another tweet: 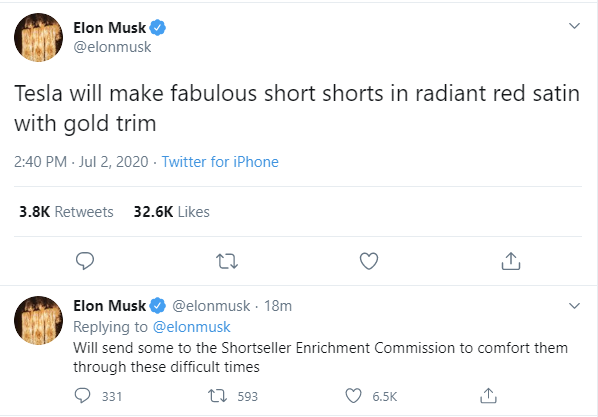 My take on all of this: It's not only a sign of recklessness and immaturity, but also extreme hubris that, in my experience, almost always ends badly...

That said, I'm not short the stock nor do I recommend getting in the way of this freight train... however disconnected from reality its valuation has become.

I've had this view since I wrote on October 24, when the stock was trading for less than $300 per share, that it was no longer a good short after the company surprised investors by reporting a profitable quarter:

Today, I am neutral on the stock. I think it's a terrible long, but probably also not a good short right now, either. Over the next few months, the company will likely report positive developments regarding the launches of the Shanghai Gigafactory and Model Y. In addition, I suspect it has more kitchen-sink benefits it can use to spruce up its fourth-quarter earnings. So for now, I think the wisest course of action is to sit on the sidelines and perhaps look for an opportunity to short the stock early next year...

It has, of course, been a spectacular long since then, so I sure got that wrong, but: a) at least I got out of a bad short; and b) missing the run-up of a stock like this doesn't bother me at all.

I don't understand this stock, but I don't have to. There are thousands of stocks out there that I can understand, so I don't need to be a hero on TSLA, long or short. My observation is that people who try to be heroes in the investing world, as in rock climbing, tend to die young...

Tesla's Overexcited Fans Should Cool Down A Little

2) This article captures some of the reasons why I remain skeptical of Tesla's stock: Tesla's Overexcited Fans Should Cool Down a Little.

3) It's easy to dismiss individual investors as day-trading fools, getting sucked into zeros like Hertz (HTZ) and seeing their savings incinerated...

But Jason Zweig at the Wall Street Journal presents evidence that they, not the professionals or the supercomputers, were the calm, rational, and sane investors during the market meltdown earlier this year: Markets Bombed, Investors Carried On. I was surprised and heartened to see this.