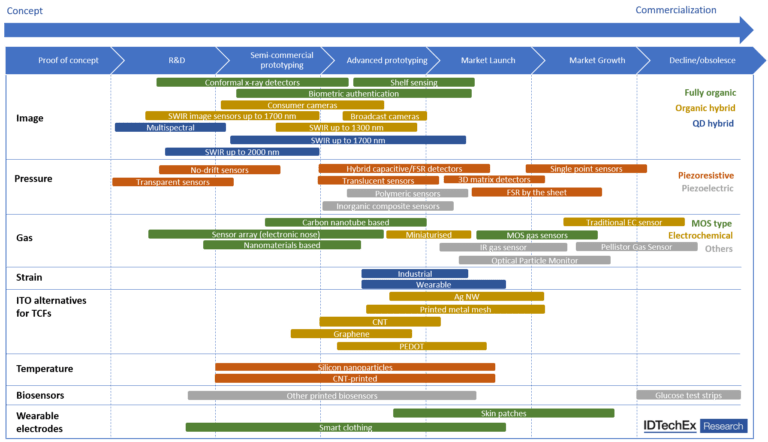 When considering the prospects of an emerging technology, it is easy to make broad-brush claims. For example, stating that ‘greater numbers of connected devices, commonly referred to as the Internet of Things (IoT), will increase demand for printed sensors’ seems an uncontroversial statement. However, as in so many areas of life, such a general statement masks a complex underlying landscape. Each technology has different target applications and different adoption barriers, both commercial and technical. As such, real insight requires a far more granular analysis, in which each sensor technology and potential application is considered independently.

A Wide Range Of Printed Sensors

The recent IDTechEx report on printed sensors, “Printed and Flexible Sensors 2020-2030: Technologies, Players, Forecasts”, employs this granular approach. It includes chapters on a wide range of printed sensor categories, including organic and hybrid image sensors, piezoresistive and piezoelectric pressure sensors, stretchable strain sensors, temperature sensors, printed electrodes for skin patches, biosensors, ITO alternatives for capacitive touch sensors, and others. The overall market for printed and flexible sensors is forecast to reach $4.5 bn by 2030, with especially rapid growth in hybrid image sensors that will grow from less than $1 m today to around $800 m by 2030. The report as a whole includes over 25 forecast lines covering different technologies and applications and mentions 120 different companies and organisations. 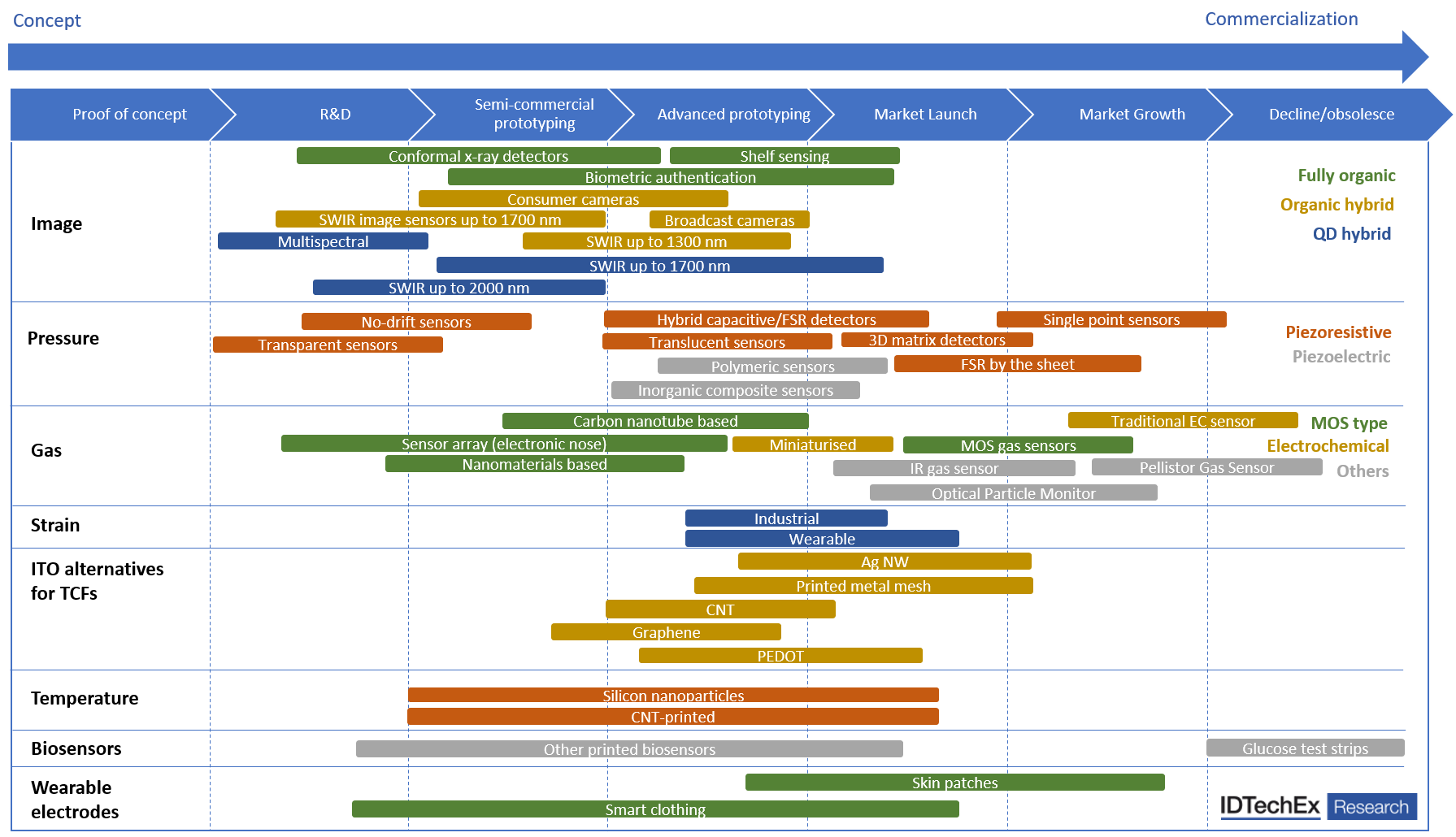 The status of each printed sensor technology, between concept and commercialization. For a detailed analysis of each technology and its status on the road to widespread adoption in multiple applications, please see the recent IDTechEx report “Printed and Flexible Sensors 2020-2030: Technologies, Players, Forecasts”.

The main target application for OPDs is biometric authentication, with one strategy involving placing a large area fingerprint sensor under a display. However, given that fingerprint sensors already exist, including those mounted underneath displays, using OPDs for this application seems to be more the result of a technology push than market need. The value proposition is much clearer for x-ray imaging, where large area sensors are required due to the difficulty of focusing x-rays. However, the market leaders are developing a flexible amorphous silicon-based sensor, filling the niche that OPDs had hoped to occupy.

More promising in our view are hybrid image sensors. These comprise a thin layer of either an organic semiconductor or quantum dots that absorbs light, with charges collected via a CMOS read-out integrated circuit. This approach is transformational, in that it enables light with wavelengths above 1000 nm to be detected by adapting existing CMOS technology – previously this was usually done with very expensive InGaAs based detectors. SWIR imaging meets a genuine market need, for both industrial inspection and most notably for driver assistance systems and autonomous vehicles since light at longer wavelengths is scattered less by dust and fog.

Crucially for commercial adoption, hybrid ‘X-on-CMOS’ detectors can be produced with minimal modifications to existing CMOS fabrication lines, greatly reducing the barriers to entry. At present, quantum dot based hybrid detectors are sensitive to longer wavelengths than their organic hybrid equivalents, and indeed are commercially available. However, organic hybrid detectors are about to be launched in broadcast cameras, where they offer benefits including a spatially variable sensitivity to prevent overexposure and resolving the existing compromise between resolution and using a global shutter since silicon is no longer used to absorb incident light.

Piezoresistive pressure sensors are long-established, being used in automotive occupancy sensors, electronic musical instruments, and some medical devices. However, such markets are rather mature and subject to commoditization. As such, manufacturers are looking to innovate to differentiate their sensors and access higher-value applications. These innovations, which are at an earlier adoption stage than established single point pressure sensors, include ‘3D-touch’ track pads that monitor pressure as well as position, hybrid piezoresistive/capacitive sensors, and even translucent/transparent detectors. Adding additional functionality increases the required sensor area in a device and the cost per area. The challenge is finding applications in which pressure sensing capability meets a genuine market need since capacitive trackpads and switches are so well established.

Printable piezoelectric sensors, in which variation in applied voltage and dimensions are coupled, can be pressure sensing.  There are two competing technologies, either specialty polymers or a ceramic containing composite, of which the former is slightly more established. Both are at a much earlier adoption level than piezoresistive sensors and are thus unlikely to directly compete with the more mature technology in the same application spaces. Instead, they are targeting high-frequency vibration sensing, for which piezoelectric sensors are far better suited than piezoresistive counterparts. However, thus far manufacturers have had more traction in applications that use printable piezoelectric materials as actuators.

Another application with multiple competing technologies at different adoption stages is transparent conductors, used primarily as an ITO substitute for capacitive touch screens. This is desirable since ITO is brittle, and thus not compatible with foldable/flexible displays. Furthermore, ITO on PET only has a moderate conductivity.

Silver nanowire (AgNW) have had a long commercialization journey, which has spanned more than 15 years and witnessed many dramatic ups and downs. Previously, AgNWs were adopted in large-area touch displays and today they are appearing in more products such as flexible displays. Hybrid metal mesh was also adopted on table-sized touch displays but has struggled to break into larger size applications. Fully printed metal mesh also continues to make progress, especially in narrowing the linewidth with narrow web printing, although this remains a difficult market overall.

Other materials for transparent conductive films, notably carbon nanotubes and graphene, are earlier in their adoption cycle. The challenge for these technologies is that they are competing not only with ITO but also with the more developed options of silver nanowires and printed metal mesh. This makes it difficult for them to establish a clear value proposition, regardless of their conductivity/ haze ratio.

A major trend in the healthcare/wellness/fitness space is the rise of continuous monitoring. Rather than taking isolated readings, either at home or at the doctor’s, continuous monitoring enables biological parameters such as temperature and heart rate to be read continuously. Coupled with appropriate software, this will reduce the need for doctor visits, enable earlier diagnosis, and monitor fitness levels during exercise.

Monitoring heart rate and performing electrocardiograms and other measurements, of muscle activity, for example, requires electrodes. At present, these are primarily based on a rigid metal snap with an electrolytic gel. However, such an approach is not well suited for long term wearing and thus printed electrodes are gaining ground. An additional driver for adoption is that wearable devices will increasingly become more integrated and flexible, with circuitry printed and even mounted directly onto flexible and even stretchable substrates. Printing the electrodes enables them to be deposited along with the interconnects, reducing manufacturing complexity, while placing ICs onto flexible substrates enables their superior processing capability to be utilized. Flexible circuits comprising both printed and placed functionality are termed flexible hybrid electronics (FHE). This rapidly emerging technology is forecast to exceed $3bn by 2030 and is extensively analysed in the recent IDTechEx report “Flexible Hybrid Electronics 2020-2030: Applications, Challenges, Innovations and Forecasts”.

IDTechEx believes that wearable electrodes are likely to be adopted in medical skin patches before smart clothing, despite the regulatory barriers associated with medical devices. There is a much greater market pull for wearable skin patches with printed electrodes since they offer genuine medical advantages such as easier use outside a hospital and greater patient comfort. Furthermore, a fully integrated skin patch can command a much higher price in a medical setting than similar monitoring technology in a wellness/lifestyle context. Employing printed electrodes in smart clothing also introduces concerns about longevity, since the entire garment would be redundant if electrode/circuitry failed. Skin patches and e-textiles are discussed more comprehensively in the IDTechEx reports: “Electronic skin patches: 2020-2030” and “E-textiles and Smart Clothing 2020-2030: Technologies, Markets and Players”.

It is thus clear that the printed sensor landscape is highly varied, comprising a wide range of technologies that address many applications. Understanding the prospects of each emerging technology depend on the market need, barriers to entry, and the extent to which it offers a clear value proposition over alternatives. Generalizing over a single category of printed sensors loses much of this complexity.

IDTechEx has been researching the emerging printed electronics market for well over a decade, launching our first printed and flexible sensor report in 2012. Since then IDTechEx has stayed very close to the technical and market developments, interviewing, and visiting the key players worldwide, organizing the largest global tradeshows and conferences, delivering numerous consulting projects, and running classes and workshops on the topic. The depth and breadth of our insight is truly unrivalled and drawn on extensively in this comprehensive report.