In this paper, the second of our three-part series on Climate Risk, we look at why it has so far been impossible to reach a consensus on tackling the issue, and the implications the various options could have on our economies and society.

As a global issue, the response to climate change requires global cooperation and coordinated action. To date, this has proved unachievable.

There is a vast array of factors involved, such as population, Gross Domestic Product (GDP) and energy usage among many others, all of which vary considerably from country to country. Bearing this in mind, it becomes easy to see why reaching agreement is difficult.

A Framework For Cooperation - Or Individualism

Climate economists have developed scenarios, which they call ‘Shared Socioeconomic Pathways’ (SSPs) (Riahi et al., 2017)1, which describe different routes to deal with climate risk. If combined with climate scenarios illustrated in Figure 1 (Nordhaus, 2017)2, it is possible to explore the implications for both societies and climate change. 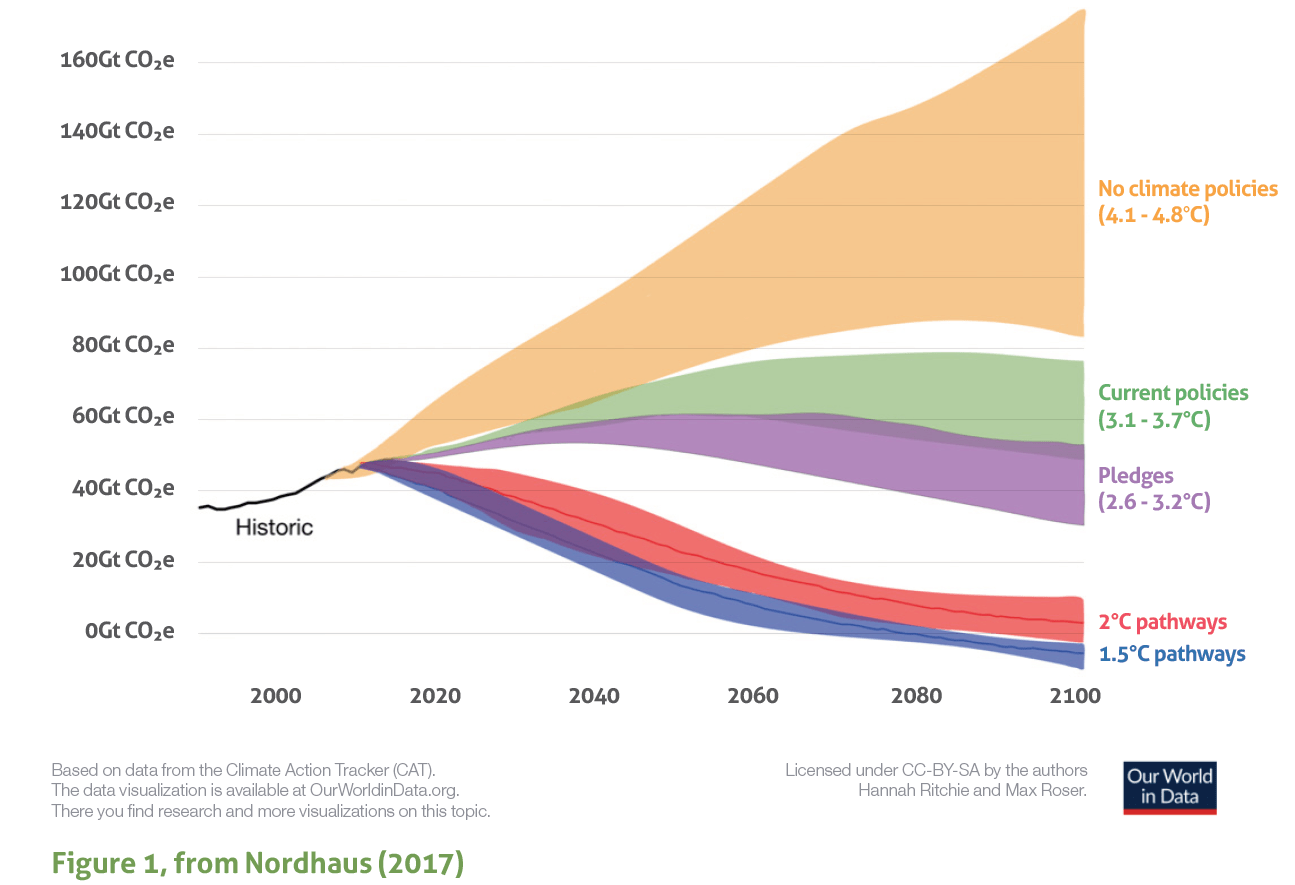 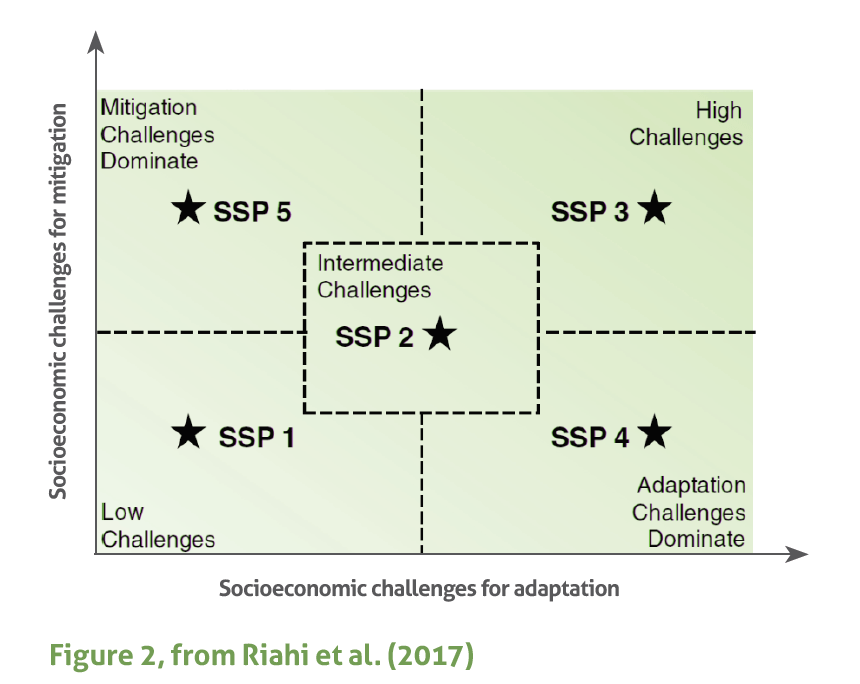 The SSPs illustrate the challenges societies face in adapting to and mitigating the consequences of climate change.

For each of these scenarios, there is an accompanying narrative, which we have reproduced in the Appendix. Under SSP1, in the bottom left corner of Figure 2, the barriers to achieving global cooperation are low and the world “shifts gradually, but pervasively, toward a more sustainable path”.

Carbon Emissions as a function of socioeconomic choices

The SSPs are based on a simple equation called the Kaya Identity3. The equation highlights the need to make socioeconomic choices in order to reduce Greenhouse Gas (GHG) emissions. It also illustrates that while eliminating fossil fuels from our overall energy mix may be the goal, the policies a country adopts to meet that goal can differ.

The Kaya Identity suggests that GHG emissions could be curbed by any combination of: reducing the use of fossil fuels; reducing the energy intensity of GDP (curtailing construction and transportation activity or possibly global trade); preventing a rise in GDP per capita (choosing to limit economic growth); or by reducing the global population.

A comparison of Ukraine and the United Kingdom – considered in isolation – offers an interesting illustration of how these scenarios could play out in practice. The UK has five times the GDP per capita of Ukraine, and Ukraine is far less efficient in its GDP-production. To produce a dollar-equivalent of GDP, the Ukraine uses five times the energy the UK does.

Rewriting the Kaya Identity as:

we see that the term in brackets amounts to the same output for the United Kingdom and Ukraine. Namely, the UK produces more GDP per capita which leads to higher emissions, but the lower GDP per capita in Ukraine is offset by the higher emissions from energy production. If Ukraine was to reform its economy so that it had the same energy efficiency as the UK, this would help to reduce global CO2 emissions. The UK could achieve the same reduction in global emissions by reducing its GDP per capita to equal that of Ukraine. Both options involve significant costs to the country concerned.

In an extreme version of SSP3 in our stylised two-nation world, we would see the UK arguing for the first option where Ukraine bears the full burden, and Ukraine would argue for the opposite. The likely outcome would be that neither would be delivered in full.

Conversely, an extreme version of SSP1 would have the UK agreeing to meet the costs of Ukraine’s transition. This would be a better outcome for the climate and for global GDP (the reduction in UK GDP would be smaller), but would the UK electorate agree to it? As in the prisoner’s dilemma, cooperation would be mutually advantageous, but there are many mitigating factors which dissuade even two nations from cooperation.

This formulation shows that carbon emissions are influenced by a range of socioeconomic choices, namely:

Determined by the proportion of fossil fuels used in the energy mix. A country’s energy mix is influenced by the nature of its economy and the natural resources at its disposal. For example, countries that industrialised more recently or whose population has grown through colonisation and migration, may have greater residual fossil fuel resources.

Measures how many units of energy are required to produce a unit of GDP. This is again heavily influenced by the nature of a country’s economy and its geography. For example, service industries are less energy intensive than manufacturing or construction; countries with hot or cold climates use more energy than those in temperate zones; rich consumers use more energy than poor.

A measure of productivity, but it is also an indicator of relative wealth. More productive economies may be less energy intensive, but richer economies consume more energy and that is why GDP is important in climate change terms.

People consume energy for shelter, activity and food production and therefore population is a significant factor for climate change.

In real life, of course, decision-making and the quest for compromise involves hundreds of nations and a tremendous number of impacted relationships. Facing this unenviable task is the United Nations Framework Convention on Climate Change (UNFCCC) Secretariat: the body tasked with achieving agreement between nations.

Discussions are held at the Conference of the Parties (COP). The Kyoto Protocol which was agreed at COP3 in 1997 was seen as a significant milestone. It obliges countries to meet their targets primarily through national measures and created what is now known as the carbon market4. This allows countries to pursue their own policies to reduce emissions while enforcing their overall reduction commitments through trading emission units – instruments which proxy emission reductions.

COP21 was held in Paris in 2015 and signalled an even greater intent to tackle climate change. The Paris Agreement’s aim was:

However, the December 2019 COP25 talks in Madrid suggest that the world may currently be closer to SSP3 (independent action) than SSP1 (mutual cooperation). UN Secretary-General Antonio Guterres expressed his disappointment when he said: “The international community lost an important opportunity to show increased ambition on mitigation, adaptation and finance to tackle the climate crisis.” 5

The central objective of the COP25 talks was to negotiate terms for a global emissions trading market6. The disappointment noted by the Secretary-General stemmed from countries wishing to row back from the terms of the Paris Agreement. Emissions trading is regarded both as the most efficient way to deliver the goals of the Paris Climate Agreement and to enforce commitments. If no agreement is found on emissions trading, then there is a greater risk that the narrative of SSP3 will continue to describe our world.

The approach embedded in the UNFCCC is to combine increasingly binding national commitments with domestic climate policies that respect each country’s circumstances. Figure 3 provides an illustration of the challenges by country using another combination of elements from the Kaya Identity: the energy intensity of GDP and the carbon intensity of energy production. The route countries take to reduce their GHG emissions will depend on their individual circumstances: what is appropriate for the EU is unlikely to be appropriate for South Africa, China or India. The intention of the proposed emissions trading market is that countries can respond flexibly while meeting their Paris commitments. 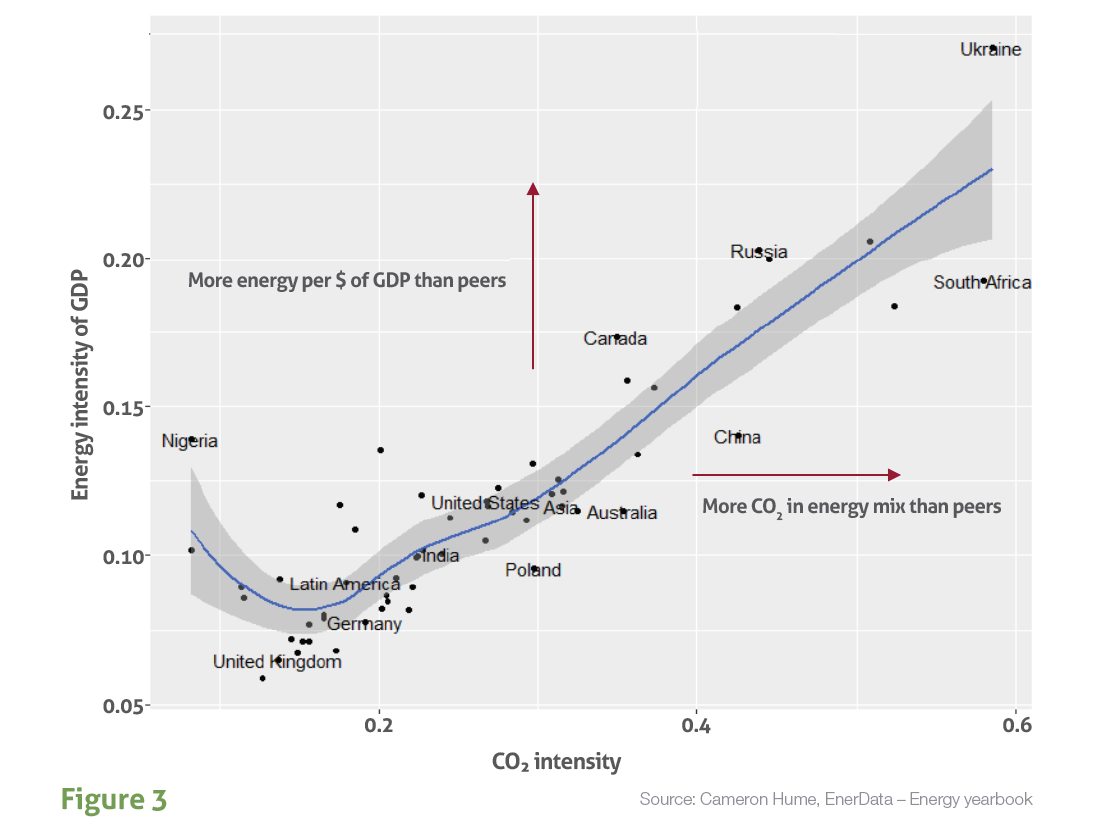 The scale of the UNFCCC Secretariat’s task is the clear. The painstaking consensus-building required involves countries ceding aspects of their sovereignty. Kyoto asked countries to make commitments to reduce GHGs; Paris required those commitments to be commensurate with capping global temperature increases; and the objective of COP26 is to make those commitments binding through the mechanism of the carbon market.

Tackling climate change will require our politicians not only to make tough decisions, but also for those decisions to be seen to be fair. This is difficult, as French President Emmanuel Macron found in his unsuccessful attempt to impose so-called “green taxes” in 20187. As various climate talks propose ever more binding objectives, agreement may become harder to achieve. What choices will politicians make when international commitments clash with domestic priorities? What choices will democracies expect their politicians to make? In less democratic nations, will the leader(s) feel any incentive to participate in the proposed global effort? The policies chosen will affect not only the future path of GHG emissions, but also societies and international relations.