ValueWalk
Home Business What to Expect From Stocks? 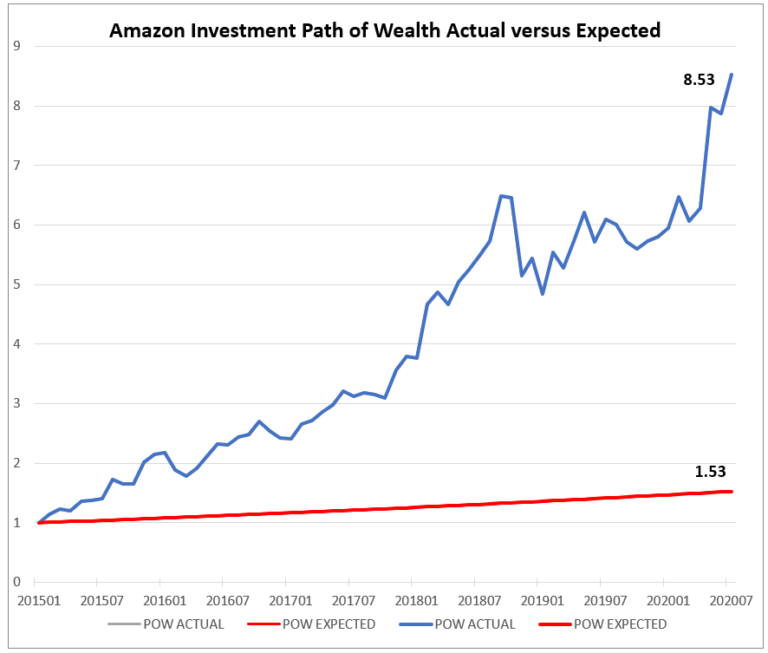 Asking what to expect from stocks may seem like a silly question.  After all, it depends on whose expectations we are talking about.  I am be bullish on stocks while you are bearish.  Although that is true, there is a finance theory answer that looks at the question from the standpoint of the overall market, not any particular investor.  That is a good place to start.

According to finance theory, stocks are priced so that they offer investors a fair rate of return for holding them.  For the market as a whole, say the S&P 500 index, decades of research has led to the conclusion that a fair risk-adjusted return is approximately equal to the risk-free rate, taken to be the yield on 10-year U.S. Treasury bonds, plus 5.5 percentage points.  Currently, the yield on 10-year Treasury bonds is 0.75%, so the theory implies that a fair expected return on the market index is 6.25%.  For individuals stocks, or sectors of the market, it may be somewhat more or less depending upon the risk of the specific investment.

Of course, actual returns typically differ from expectations.  According to finance theory the main reason is the arrival of new information.  To see how this works let’s use an investment in an exchange traded fund that tracks the S&P 500 as an example.  As calculated above, the expected return is 6.25%%  Now assume that new information arrives.  Say, for example, the government announces that retail sales were much higher than forecast.  In light of the new information, market participants adjust upward their expectations of future cash flows for a large number of companies.  In light of the greater expected cash flows, in order for the expected stock return to remain at the same fair risk-adjusted return of 6.25%, stock prices have to rise.  During the adjustment period, when prices are rising to reflect the new information, actual returns will exceed 6.25%.  However, once the adjustment is complete and prices are in line with the new cash flow forecasts, expected returns will be back to the fair risk-adjusted level of 6.25%.  In short, the market continually adjusts prices to new information so as hold expected returns constant.  This is a fundamental reason why past actual returns are not predictive of future returns.

The bottom line is that in order for an investor’s actual return to exceed the expected return the investor must be able to anticipate the arrival of new information.  It also means that good performance and a rosy outlook are not enough for a company’s stock price to rise more than the expected rate of return.  Actual returns will exceed expected returns only when company performance is better than that what was previously expected.

Nonetheless, I would be the first to admit there have been some pretty remarkable performances in recent years.  Amazon, which was already a big company by the start of 2015, is a good example.  Because Amazon is riskier than the average stock, the expected return on the stock calculated using a finance theory model is about 8.0%.  How has Amazon’s actual stock price performance compared with this expectation?  The graph below answers the question.  Starting on January 1, 2015, the red line in the graph shows how $1 invested in Amazon would have grown at the expected rate of return of 8.0%.  The blue line plots the actual growth rate.  The graph shows that although there are periods of time when Amazon did worse than expected, such as the end of 2018, in general Amazon beat expectations – by a lot.  An investor bought Amazon on January 1, 2015 and earned the expected return would have $1.53 per dollar invested by June 18, 2020.  In fact, each dollar invested in Amazon grew to $8.53.   It makes you wonder how Amazon was able to do consistently better than expected.  Perhaps more to the point, it makes you wonder whether current expectations have finally caught up.  If they have, investors hoping that Amazon will continue to perform as it has are likely to be disappointed. 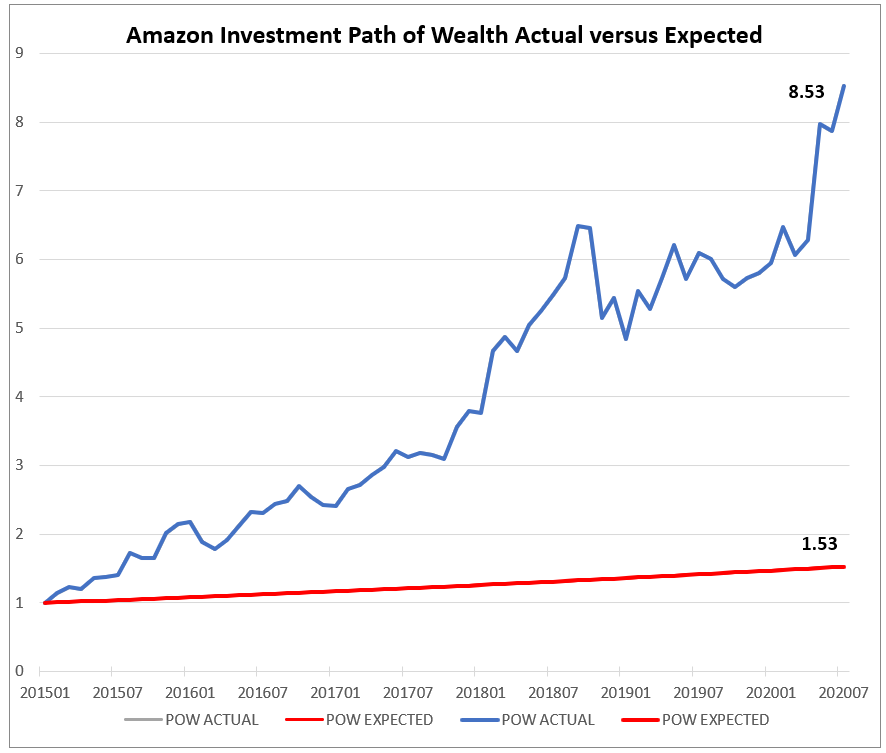 There is nothing unique about the Amazon example.  The graph looks pretty much the same for other major tech companies like Apple, Google, Facebook, Microsoft, and Netflix.  All of them have routinely exceeded expectations and their stock prices ran up accordingly.  The problem for these companies is that unlike corporate operations, expectations are easy to adjust.  Eventually there is the risk that expectations will outrun what can be delivered.  Elite athletes routinely complain about this phenomenon.  After a particularly great season, they often end up spending the rest of their career explaining why they are not living up to expectations.

Given the current level of prices in the market, for instance Amazon trades at a P/E of over 125, a wise course of action is to assume that returns in excess of the expected returns given by finance theory are unlikely to be achieved.  Even the expected returns give by finance theory may be a stretch given the current prices at which they are trading.

For those interested in delving into more sophisticated efforts to predict expected returns on stocks, I recommend taking a look at Research Affiliates website.  They have developed a sophisticated model for estimating expected returns that takes account of the current level of market prices around the world.  A word of warning – for U.S. stocks they are predicting lower returns than the 6.25% prediction of the finance theory model.