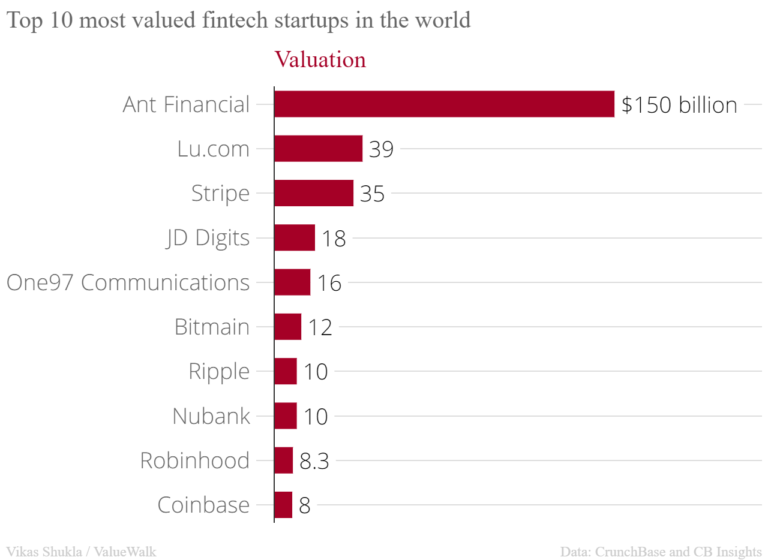 Over the last few years, fintech startups have changed the rules of the game in banking, insurance, payments, investing, and other related sectors. They are using Blockchain, cloud computing, AI, and machine learning to better serve their customers and outsmart the traditional financial institutions. Here we take a look at the top 10 most valued fintech startups in the world.

According to Crunchbase Fintech Industry Report 2020, there are 90 fintech unicorn startups worldwide as of February 2020. Their combined valuation is around $500 billion. Several publicly-listed technology companies have also entered the fintech space to grab a piece of the pie. Apple has launched Apple Pay and Apple Card; Google offers checking accounts and Google Pay; and Facebook facilitates payments via Facebook Pay.

The ranking below is based on data from CB Insights and the Crunchbase Fintech Industry Report 2020. China and the US both have four startups each in the top ten. 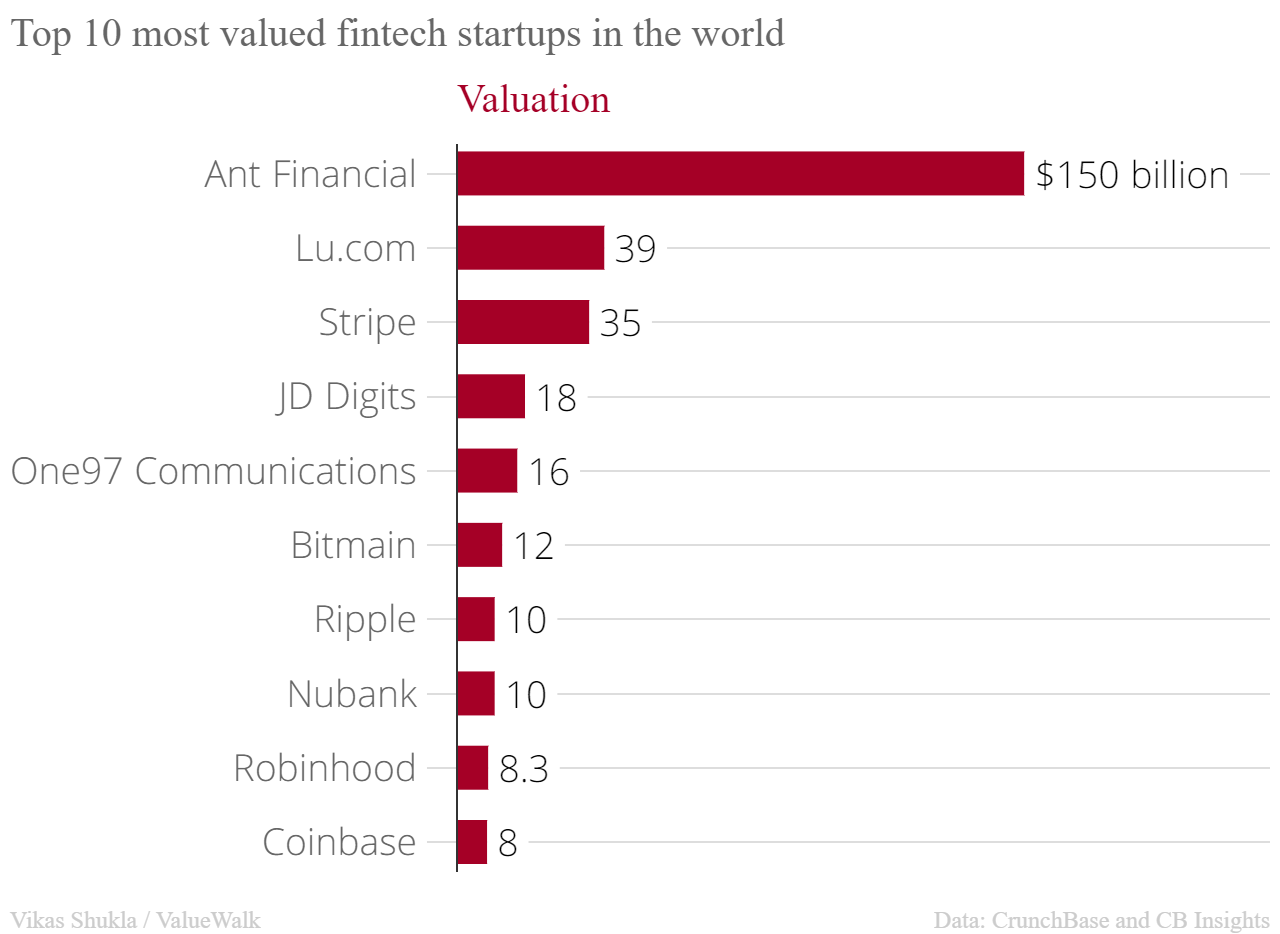 San Francisco-based Coinbase counts Y Combinator and Union Square Ventures among its investors. It was valued at $8 billion in its last funding round. Coinbase is a digital currency exchange that enables trading of various cryptocurrencies including Bitcoin. Founded by Brian Armstrong and Fred Ehrsam, it has raised a little over $500 million in venture funding since its inception.

According to CB Insights, Robinhood is currently valued at $8.3 billion. It is one of the most valuable fintech startups in the US. Robinhood is a zero-commission trading platform that lets you invest in stocks, ETFs, options, and cryptocurrencies. It also offers savings and checking accounts. Robinhood is immensely popular among millennial investors.

Sao Paulo, Brazil-based Nubank is a neobank. It offers digital bank accounts, international credit cards and personal loans. Nubank is the largest fintech startup in Latin America. Last year, Fast Company ranked it among the world’s most innovative companies. Nubank investors include Sequoia Capital and Kaszek Ventures. It has more than 20 million customers.

Headquartered in Beijing, Bitmain Technologies makes high performance chips and software for Bitcoin mining. It also operates BTC.com and AntPool, two of the world’s largest Bitcoin mining pools. Its investors include IDG Capital and Sequoia Capital China. The company was planning to go public in 2018 with an IPO on the Hong Kong Stock Exchange, but the IPO attempt failed.

Noida, India-based One97 Communications is the fifth most valued fintech startup in the world. One97 owns the Paytm payment platform. It has also launched Paytm Mall and Paytm Payments Bank. One97’s investors include Ant Financial, Berkshire Hathaway, Alibaba, and Intel Capital. It has raised a total of $4.4 billion from venture investors.

Previously called JD Finance, the Beijing-based company provides a wide range of financial products and services to connect financial and physical industries. It is the fintech affiliate of Chinese e-commerce giant JD.com. The startup has raised a total of $5 billion from venture investors since its inception.

Founded by John Collison and Patrick Collison, Stripe is the most valued fintech startup in the United States. It’s a payment platform that enables individuals and businesses to make payments online. Its clients are Amazon, Shopify, Microsoft, Facebook and other corporate giants. Its investors include Khosla Ventures, Lowercase Capital, and capitalG.

The top two most valued fintech startups on the planet are both Chinese. Shanghai-based Lu.com aka Lufax is an online marketplace for trading of financial assets. It was launched in 2011 as a peer-to-peer lending platform, and now offers a broad range of financial products. Ping An Insurance is one of the largest shareholders of Lu.com.

Ant Financial is an affiliate of Chinese e-commerce giant Alibaba. It operates the world’s largest online payments platform Alipay, which has nearly a billion active users. It also owns the wealth management platform Ant Fortune and private online bank MYBank. Ant Financial is planning to go public this year at a valuation of around $200 billion.