Mathematician Jim Simons and his hedge fund Renaissance Technologies have an incredible track record. RenTec’s flagship Medallion Fund has returned 66.1% annually before fees and 39% after fees between 1988 and 2018. Investors are always curious about what their favorite investing legends have bought and sold. And the 13F filings let us dig into the current holdings of legendary investors such as Simons. Here we take a look at Jim Simons’ top 10 largest stock holdings.

Investment firms with more than $100 million in equity assets are required by the Securities and Exchange Commission (SEC) to submit a Form 13F quarterly report. Jim Simons’ Renaissance Technologies submitted its Form 13F for the January-March quarter on May 14th. RenTec employs complex mathematical models to analyze and execute trades.

According to the 13F documents, Jim Simons was betting big on healthcare stocks, at least during the January-March quarter of 2020. Healthcare accounts for 24% of RenTec’s portfolio. About 15% of the portfolio was in the information technology sector, followed by consumer discretionary sector with 13%. 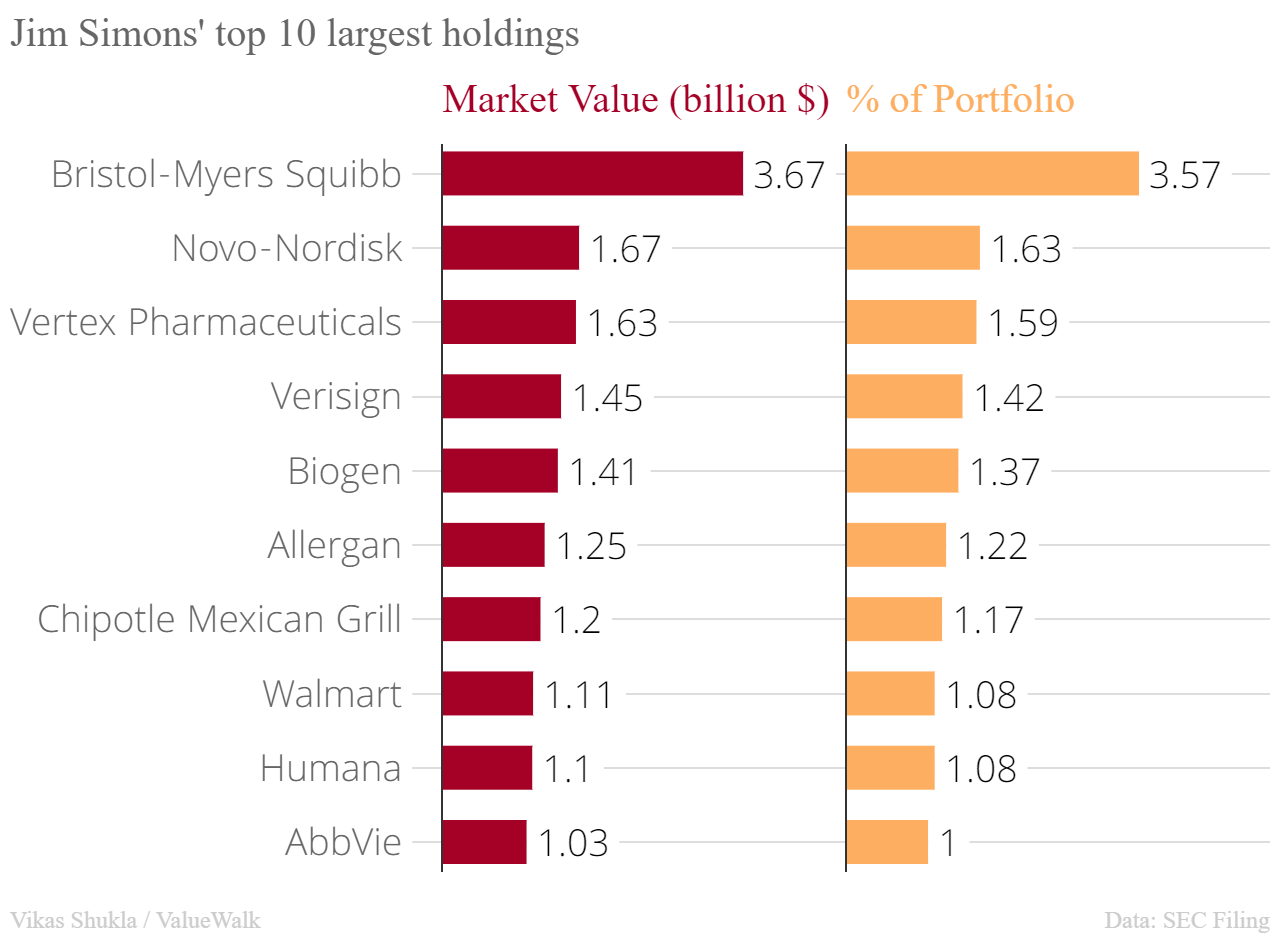 AbbVie was spun out of Abbott Laboratories in 2013. At the end of March, Renaissance Technologies owned 13,555,849 shares of AbbVie worth $1.03 billion. The hedge fund purchased 1,759,105 AbbVie shares during the January-March quarter.

Simons purchased an additional 577,900 shares of Humana during the first quarter, taking his total holding to 3,529,142 shares worth $1.10 billion. The Louisville, Kentucky-based health insurance giant accounts for only 1.08% of RenTec’s portfolio.

Walmart operates more than 11,000 stores worldwide. Its massive footprint has helped it compete against Amazon. More than 90% Americans live within 10 miles of a Walmart store. Simons’ hedge fund owns $1.11 billion worth of Walmart shares. During the March quarter, RenTec increased its Walmart holding by 875,377 shares to a total of 9,802,214 shares.

Allergan Plc has now become a subsidiary of AbbVie. The $63 billion transaction was completed earlier this month. RenTec aggressively purchased 2,069,332 Allergan shares in the January-March period, and held 7,089,144 shares worth $1.25 billion at the end of the quarter.

Biogen is the fifth largest stock holding of Jim Simons. He sold 95,994 Biogen shares during the March quarter, but still held 4,473,912 shares worth $1.41 billion. Notably, Warren Buffett’s Berkshire Hathaway purchased around $200 million worth of Biogen stock towards the end of 2019. It was Buffett’s first biotech investment.

Simons trimmed his stake in VeriSign. As of March 2020, RenTec owned VeriSign shares worth $1.45 billion. The Reston, Virginia-based communications and network infrastructure company saw its stock skyrocket from just $18 per share in January 1999 to $248 in March 2000 at the peak of the Dot-Com bubble. More than 20 years later, the stock is still trading at around $215 a share.

New York-based Bristol-Myers Squibb is RenTec’s largest stock holding, accounting for 3.57% of the hedge fund’s portfolio. Jim Simons purchased 5,781,450 Bristol-Myers Squibb shares during the March quarter. The company makes prescription drugs and biologics in many therapeutic areas including diabetes, cardiovascular diseases, oncology, hepatitis, and psychiatric disorders. Last year, it acquired Celgene in a $74 billion deal, one of the biggest acquisitions in the pharmaceutical industry ever.