Former fund manager Whitney Tilson has been busy recently. In addition to offering his readers a deal on toilet paper and other household goods, and “partnerships” in his newsletter, Tilson also warned them about holding Netflix Inc (NASDAQ:NFLX) at current levels:

The first-quarter results were impressive in terms of net subscriber additions and operating margin expansion, but Berna [Barshay, Tilson's colleague] has a warning for investors...

I would be cautious chasing the stock here, and if I was long, I would consider taking profits on at least part of my position.

Readers who recall that Tilson shorted Netflix ten years ago, and are mindful of the stock's performance since... 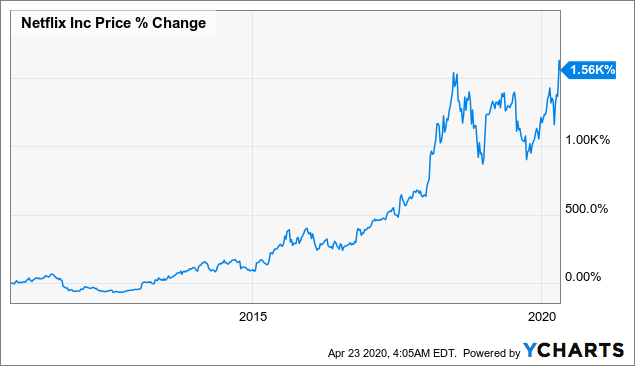 May view Tilson's word of caution on Netflix now as a contrarian indicator. And indeed, my own system, Portfolio Armor, is bullish on it now, as you can see in the screen capture below, where it came in at #33 on our daily ranking of securities on Wednesday.

But what I wrote about Amazon (AMZN) recently applies to Netflix too:

The market’s rebound since late March suggests investors are optimistic about a v-shaped economic recovery following the contraction caused by the lockdowns. That’s in contrast to economists who suggest the recovery could take years. If the market ends up agreeing, we could see another leg down where leveraged investors are forced to liquidate even their best performers

There remains a strong possibility that the market rebound since late March has been a bear rally. In the event that's the case, let's look at a couple of ways Netflix shareholders can stay long while strictly limiting their downside risk.

For these examples, I'll assume you own 200 shares of Netflix and can tolerate a decline of 22% over the next several months, but not one larger than that. The screen captures below come from the Portfolio Armor iPhone app.

These were the optimal puts, as of Wednesday's close, to hedge 200 shares of NFLX against a greater-than-22% decline by late November. 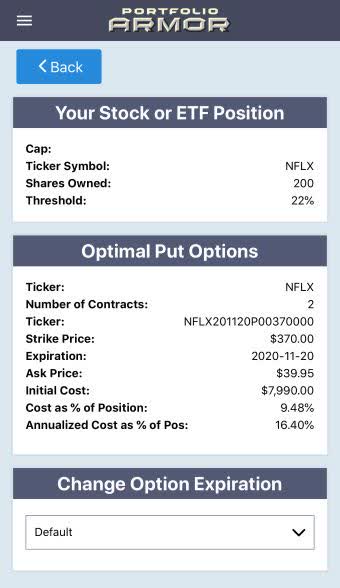 The cost of this protection was $7,990, or 9.48% of position value, calculated conservatively, using the ask price of the puts (in practice, you can often buy and sell options at some price within the spread between the bid and ask.). That worked out to an annualized cost of 16.4% of position value, so fairly pricey.

If you were willing to cap your possible upside at 22% over the same time frame, you could have used the optimal collar below to get the same level of protection as above. 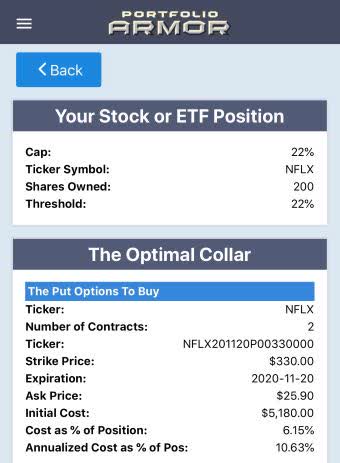 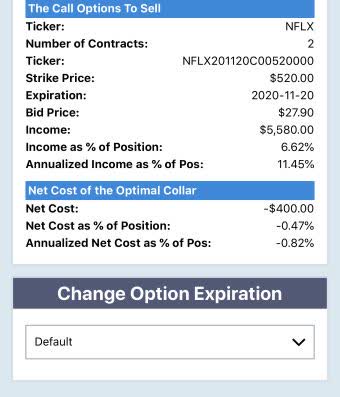 You might have noticed that the strike on the put leg of this collar is different than the strike on the puts in the previous hedge. After an iterative process taking into account the net cost of the collar, the hedging algorithm was able to use a less expensive strike for the put leg here, one where the cost was $5,180, or 6.15% of position value (calculated at the ask). That was more than offset by the income generated by the short call leg: $5,580, or 6.62% of position value (calculated at the bid).

So the net cost of this collar was negative, meaning you would have collected a net credit of $400, or 0.47% of position value, assuming you placed both trades at the worst ends of their respective spreads. That worked out to an annualized cost of -0.82% of position value.

Wrapping Up: Trading Money For Time

Both of the hedges above used our default options expiration date, which is the one closest to six months out, but app users can use the drop-down to experiment with different expiration dates to see how the both the absolute cost and the annualized cost varies. As of Wednesday, for example, you could find the lowest (most negative) hedging cost not at the third furthest out expiration date (June of 2021).