ValueWalk
Home Business Top 10 most valuable startups in the world 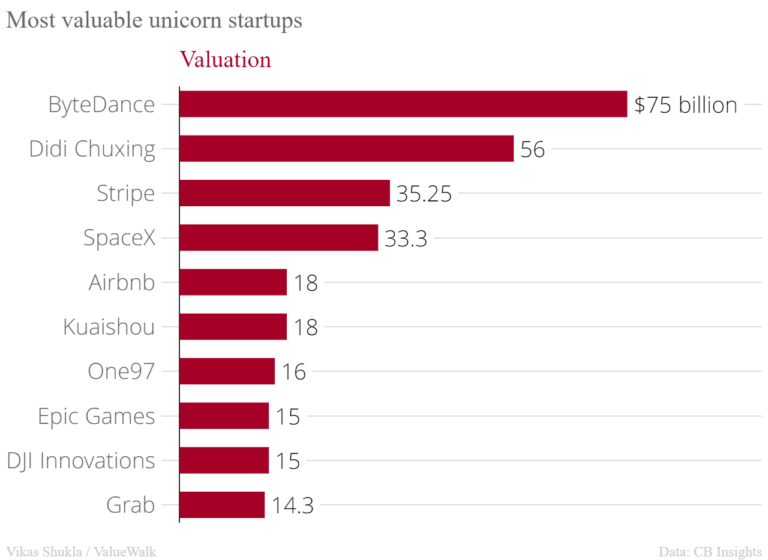 Startups are not immune to the Coronavirus pandemic. Many of them are struggling to stay afloat. According to data from CNN Business, SoftBank-backed startups had to lay off at least 7,300 employees in four months ending February. Startup valuations have also taken a major hit in the last few weeks. However, there are still 464 unicorn startups around the world. Most of them are in China, the United States, and India. Here we take a look at the ten most valuable startups in the world.

A unicorn is a privately-held company with a valuation of at least $1 billion. The combined valuation of all 464 unicorns stands at $1,365 billion, according to data from CB Insights. The ranking is based on data from CB Insights as of April 2020. Some startups from last year’s top ten list have either gone public (Uber) or suffered a massive drop in their valuations (WeWork). 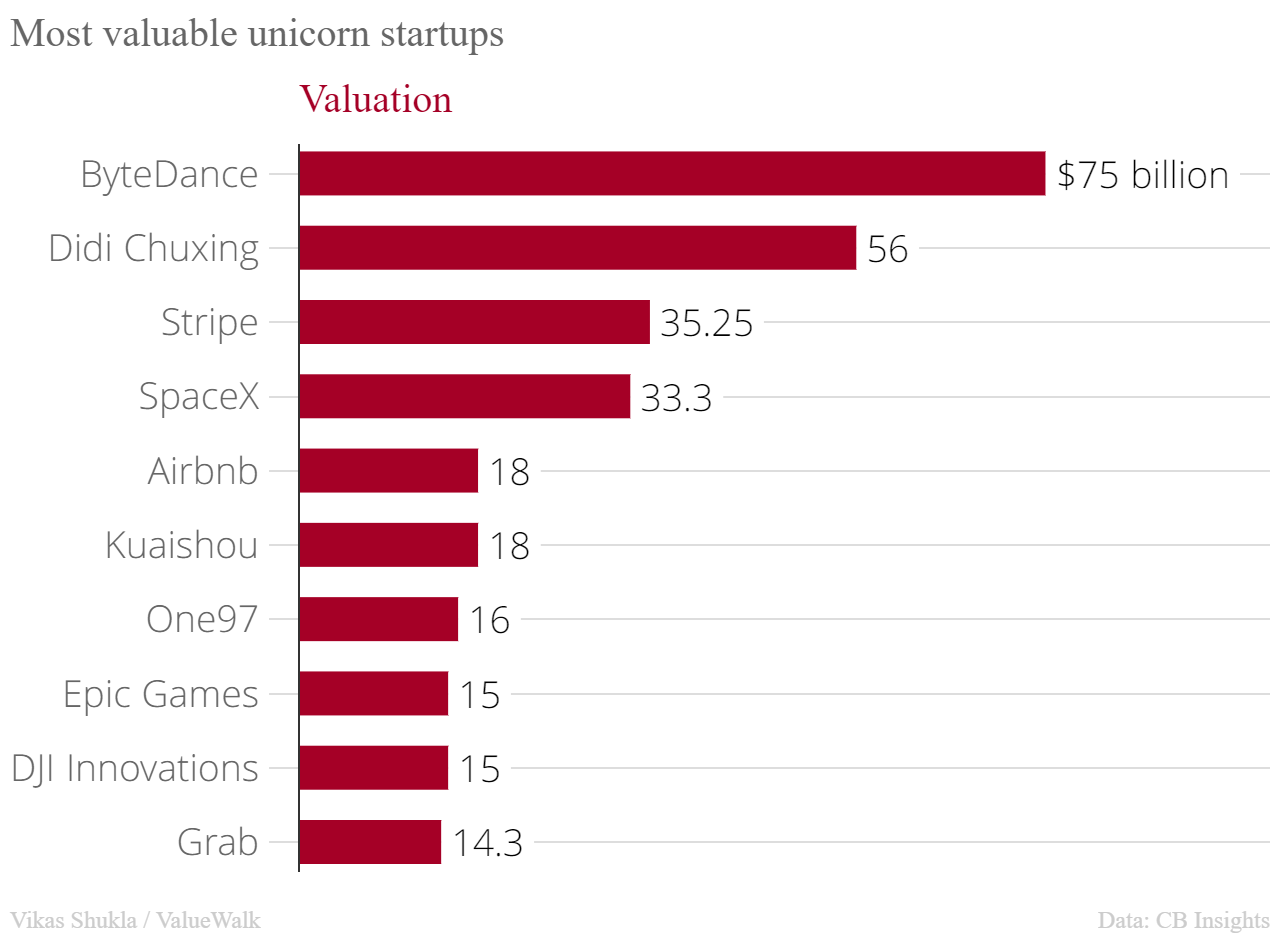 Singapore-based ride-hailing and food delivery giant is currently valued at $14.3 billion, according to CB Insights. Its valuation has remained roughly the same as last yer. Grab has a strong presence in Singapore, Indonesia, Malaysia, Thailand, Vietnam, and Myanmar. It is also Southeast Asia’s first ‘Decacorn,’ a startup valued at $10 billion or more.

Shenzhen, China-based DJI is one of the world’s leading makers of consumer drones and action cameras for photography and videography. DJI dominates the global civilian drone industry with over 70% market share. Founded in 2006, DJI is currently valued at $15 billion.

Epic Games is the developer behind some of the world’s most popular games including Gears of War, Fortnite, and Infinity Blade. With the skyrocketing popularity of its games, it became a unicorn in October 2018. Its investors include Tencent Holdings, KKR, and Smash Ventures.

One97 counts Alibaba, Ant Financial, Intel Capital, and Warren Buffett’s Berkshire Hathaway among its investors. It’s a leading payment service provider in India under the brand name Paytm. The fintech startup achieved the unicorn status in 2015. It has also launched Paytm Payments Bank and Paytm Mall.

Not many people in Western countries have heard of Kuaishou. It’s a Chinese short video sharing platform with over 200 million active users. It is one of the biggest competitors of TikTok in China. Kuaishou counts Baidu and Sequoia Capital among its investors. It achieved the unicorn status in January 2015.

Airbnb’s valuations have taken a massive hit due to the coronavirus pandemic. The travel and vacation rental businesses have come to a halt. According to the Wall Street Journal, Airbnb’s valuation has dropped from $31 billion last year to $18 billion in the latest funding round. The company is also cutting its marketing budget.

Billionaire Elon Musk’s SpaceX is currently valued at $33.3 billion. The space transportation company achieved the unicorn status in 2012. SpaceX aims to colonize Mars. It has dramatically reduced the cost of rocket launches by successfully landing the rockets vertically. SpaceX investors include Rothenberg Ventures and Founders Fund.

Stripe is a payment platform that allows individuals and businesses to send and receive payments online. It has a valuation of $35.25 billion. Patrick Collison and John Collison – brothers who founded Stripe – are among the world’s youngest billionaires. Its investors include capitalG and Khosla Ventures.

Didi is China’s leading online-to-offline company. It provides ride-hailing, food delivery, and bike sharing services to millions of users in China and other countries. Didi has also made strategic investments in several other startups including Grab, Ola, Uber, and Lyft. Its investors include Tiger Global, Matrix Partners, and SoftBank.

The top two most valuable startups in the world are Chinese. ByteDance is the company behind TikTok and Toutiao. TikTok has become a global hit, racking up more downloads than Facebook and Instagram. Toutiao is a news aggregator app that uses AI algorithms to track reader habits and deliver relevant content. ByteDance investors include KKR, SoftBank, and Sequoia Capital China.