ValueWalk
Home Business Repo Liquidity Crisis: This Is It 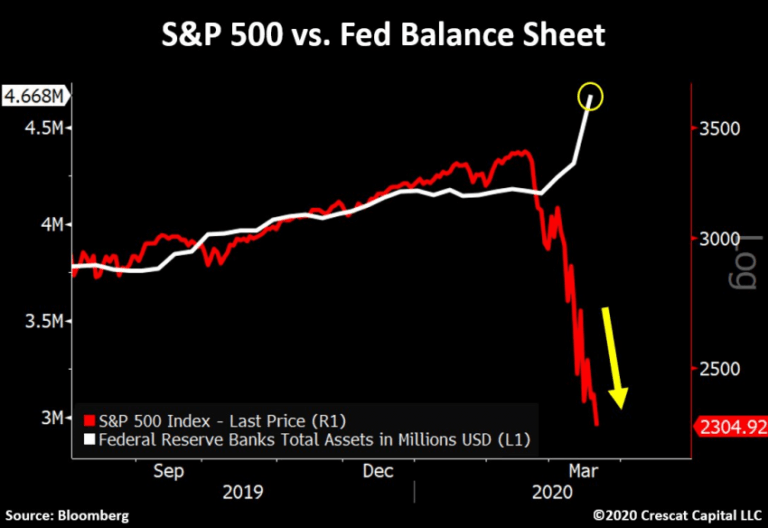 Crescat Capital’s commentary for the month of March 2020, titled, “This Is It”, discussing the economic crisis and the repo liquidity crisis.

Many of you understandably have been asking for more frequent performance and positioning updates now that we are in a bona fide financial crisis. We are happy to oblige.

The good news is that since the market top on February 19 and through last Friday, Crescat Global Macro Fund LP is up approximately 40.5% net while Crescat Long/Short Hedge Fund LP is up 34.3%. At the same time, the S&P 500 Index has declined 31.8% including dividends: 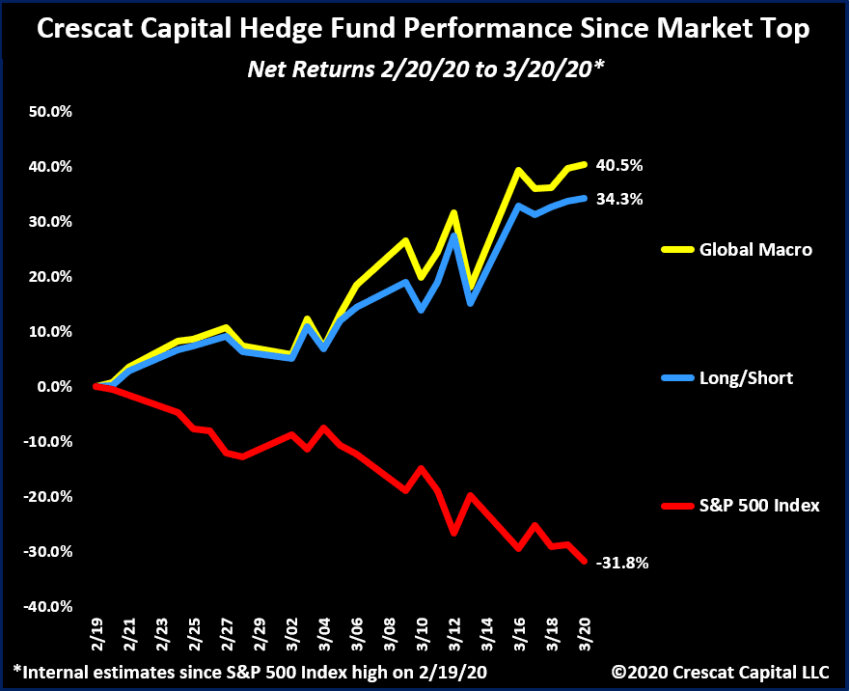 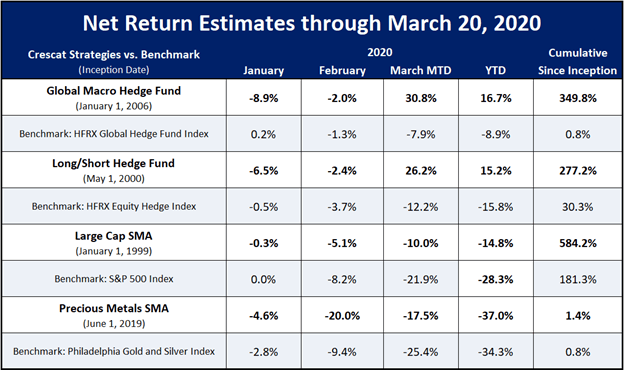 This is it! It’s the market and economic downturn we have been preparing for since late 2017. That’s when we first showed that the US stock market was in historic bubble territory across a composite of valuation and leverage measures. We believe the swiftness of the decline now unfolding is a strong justification for why we insisted on staying positioned net-short ahead of it in our hedge funds. This allowed our clients to reap the benefits while others scramble to unwind and reposition under severe stress. Our macro model is what guided us.

We adopted a bearish view and significant tactical net short equity position in our hedge funds in late 2017. That positioning enabled us to have two of the world’s top performing hedge funds in 2018.

The Major Repo Liquidity Crisis Of 2019

Then came 2019. The Fed curtailed its interest rates hikes after the Q4 2018 slip in the markets. The downturn in the business cycle that we were expecting failed to materialize in 2019. We certainly did not expect the market to push to new highs last year. Our 16-factor macro model and many other indicators continued to warn us that the market was extremely overvalued and the economic expansion overextended. After the US Treasury yield curve inverted more than 70% in August amidst a major repo liquidity crisis, we were as convinced as ever that a significant bear market was imminent. August indeed was a big month for Crescat as the Chinese yuan broke down, breaching the 7 level on USDCNY, and our long precious metals positions screamed higher, two key legs of our Macro Trade of the Century.

Global equity shorts, including US stocks, are the third leg. But in the wake of a repo liquidity crisis, late-cycle bulls twisted the new Fed money printing into an excuse to drive the stock market even higher. From October onward, the S&P 500 just kept melting up to new highs. All the while, corporate earnings in the US were already turning down and China was hurtling toward recession. The economic downturn was so threatening that Trump and Xi agreed to a panic Phase 1 trade deal to try to stem the downward spiral. That only made stocks go higher.

Repo liquidity crisis and beyond

We made risk control sacrifices (partial buy to covers) to stay in the game without abandoning our core positioning. We maintained our significant net short equity positioning throughout. 2019 ended down for Crescat’s hedge funds despite success on the long side of the portfolios and in our long-only separately managed accounts. Then January 2020 came along. Speculation was still running rampant on the hype of the trade deal despite continued deteriorating macro and fundamental data globally. The down performance in our hedge funds that month just added insult to injury.

We continued to try to instill confidence in our hedge fund clients based on the intrinsic value of our portfolios. We were convinced that our shorts were worth substantially less than market pricing and longs worth much more. We said were positioned for an economic downturn that was ripe to unfold. We warned extensively about the high probability of a severe bear market and recession coming soon in our letters and social media posts. We showed how our hedge funds would likely perform in a bear market based how they rose in the down months for global stocks over the last two years. For instance, we showed this chart in our Q4 Quarterly Investor Letter published on January 29. 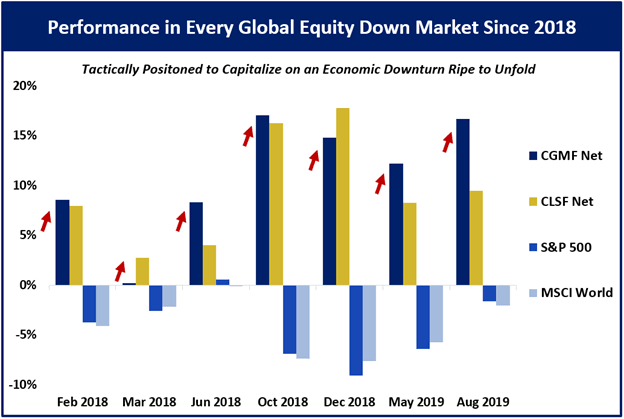 Then came February 2020. It was a month of rabid insanity as the stock market frothed up even higher. Meanwhile our value-oriented long hedges failed miserably. It was like January’s madness all over again. All the while the coronavirus threat was intensifying.

We gave a webinar presentation for our clients warning of the substantial risks in the market and pounded the table on the opportunity in our funds on February 13 and 14th. We laid out the case for the macro set up of the century. We did the same presentation to the world on YouTube livestream on February 21:

Then, finally, through no timing genius, just grit perseverance, the market gapped down on Monday, February 24 and plunged all week. There have been a few big one-day bounces since then, but the steep downturn only continued. It’s was the steepest 22-day decline for US stocks ever, and stocks are down again today even after Powell’s “whatever it takes” pronouncement.

For all those who had been foolishly chasing this late cycle melt-up and thought money printing and stock prices were positively correlated to infinity, welcome to the real world: 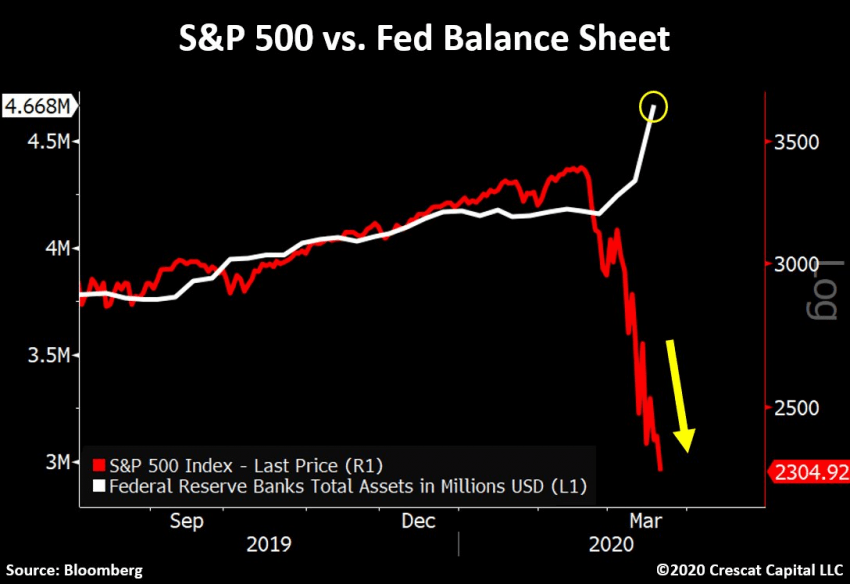 The crash was coming with or without the coronavirus pandemic. It started from record highs, historic leverage, and the most fundamentally over-valued composite of multiples ever, higher than 1929 and 2000. It was the longest expansion phase of a US business cycle in history. Now, it’s not just a US, but a global financial market meltdown, predestined by historic global debt to GDP and enormous worldwide asset bubbles. The Chinese banking system, and its currency by association, is largest of all today’s asset bubbles in our view, where there is much, much more to play out still on the downside.

Our performance since the top has been driven by diverse global short positions of over-valued global equities with deteriorating growth fundamentals and often bloated balance sheets. Also, in our global macro fund, our corporate credit shorts and sovereign bond spread trades have performed extremely well. Our shorts have done so well that we have generated these overall high returns at the same time as our precious metals long positions have pulled back substantially. When it comes to the precious metals side, we are convinced that the baby was thrown out with the bathwater.