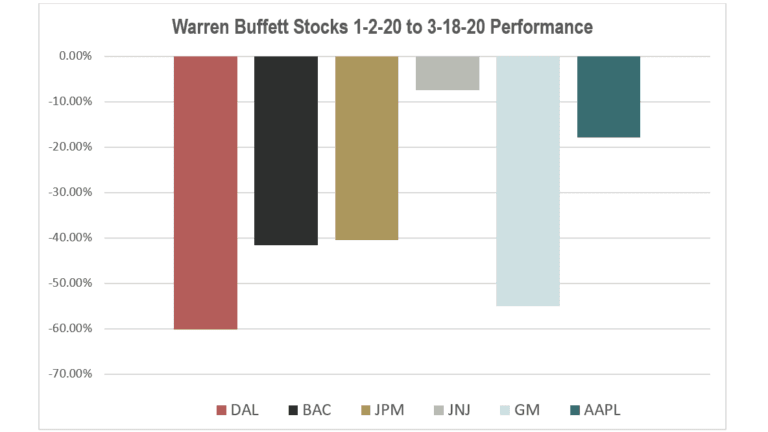 In an extended series of articles beginning in the fall of 2019 published here on Valuewalk and on www.cornell-capital.com, I reiterated the theme that it was a very difficult time for investors.  These articles included pieces such as Why This is Such a Hard Time for Investors, Why Warren Buffett is Sitting on $128 Billion in Cash?, The Big Market Delusion, The Apple Multiple Expansion, and Is Tesla a Tech Stock.

The thrust of all these articles was the same and is best summarized by what I wrote at year end 2019, “In the forty years that I have been studying and participating in investment markets, the current conditions are among the most challenging.  That may sound odd – interest rates are low, credit spreads are tight, stock prices are near records, real estate has recovered from the great crash to reach new highs.  But those are exactly the problems.  What matters to investors is how their investments will perform in the future, not how they have done in the past.  And going forward all the past good news are the reasons that times are so perilous today.  Prices have been pushed to historic levels . .  . There is a reason that Warren Buffett is sitting on $128 billion in cash.”

At the time I wrote the article, I suggested that investors in U.S. equity markets should focus on value stocks and consider hedging their position with options.  Looking back now, how did that strategy work?  The good news is that it beat the market by any reasonable measure.  The bad news is it was still down a lot for two primary reasons.  First, value stocks were no more immune to the Covad-19 collapse than their more glamorous cohorts.  Second, the market dropped so quickly and so far that the value of all the options fell to essentially zero and  offered no added protection from that point forward.

As an illustration of the first point, the first graph below plots the percentage drop from the beginning of 2020 in the Russel1 1000 Growth Index and the Russell 1000 Value Index.  The graph shows that the value index actually dropped more, down 32.0%% as of the close of March 18, compared to the growth index which was down only 27.5%.  This despite the fact that in 2019 the growth stocks had run up much more sharply than the value stocks, many of which did not rise at all. 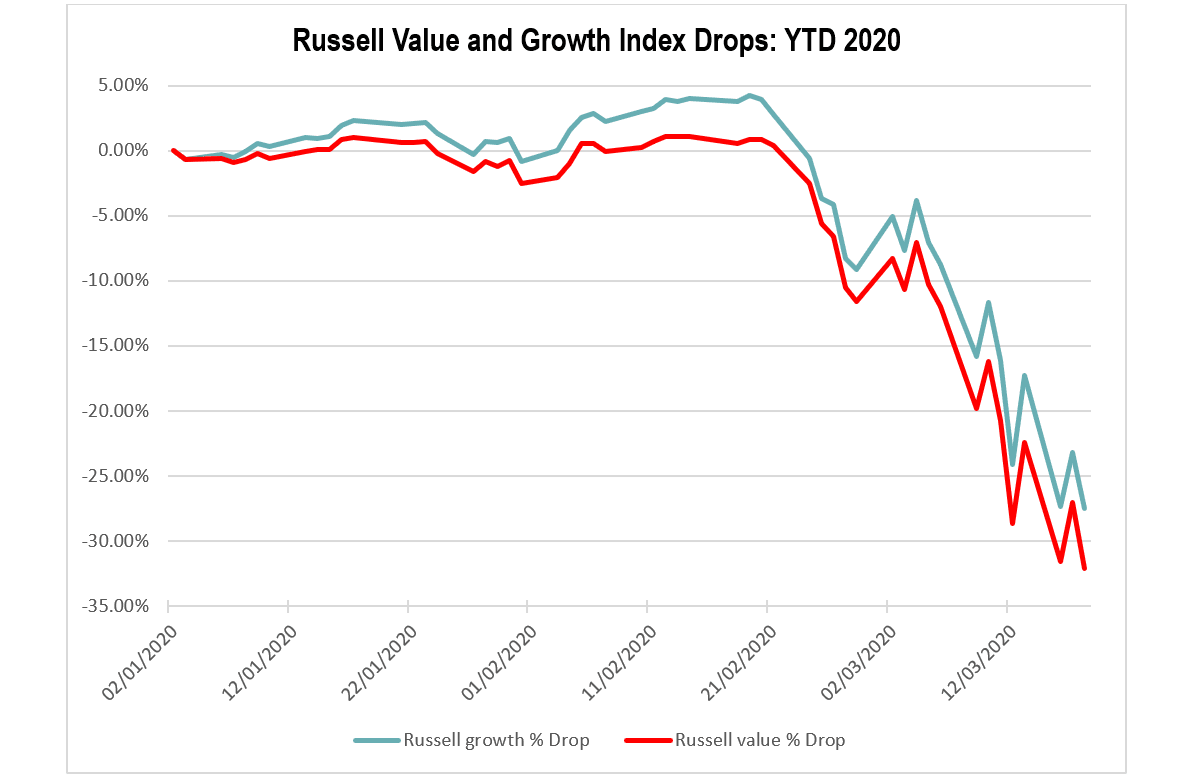 One paradox of investing is that times are bad for investors putting money to work when the economy has had a long run of good times, as was the case in December 2019, and are good for investors after a calamity as is the situation today.  In the case of value stocks, the news has been so bad that investors may now have a promising opportunity.  After missing much of the run up and then suffering more in the collapse, some major value stocks are reaching attractive levels.  The chart below provides some examples drawn from stocks held by Warren Buffett at Berkshire Hathaway.  It is worth noting that the current collapse has hit the Berkshire portfolio hard with the aggregate market value of the company’s holding of common stock off more than $80 billion.

A Look At Buffett's Losses

The chart demonstrates the diverse behavior of value stocks during the market collapse.  Johnson and Johnson held up remarkably well dropping less than 10%.  Apple, a stock somewhere between value and growth, and Mr. Buffett’s biggest holding, was down less than 20%.  On the other hand, General Motors, Bank of America and Delta Airlines were all down over 40%, with Delta dropping more than 60%. Buffett's loss on Bank of America, his second largest holding, was particularly dramatic. 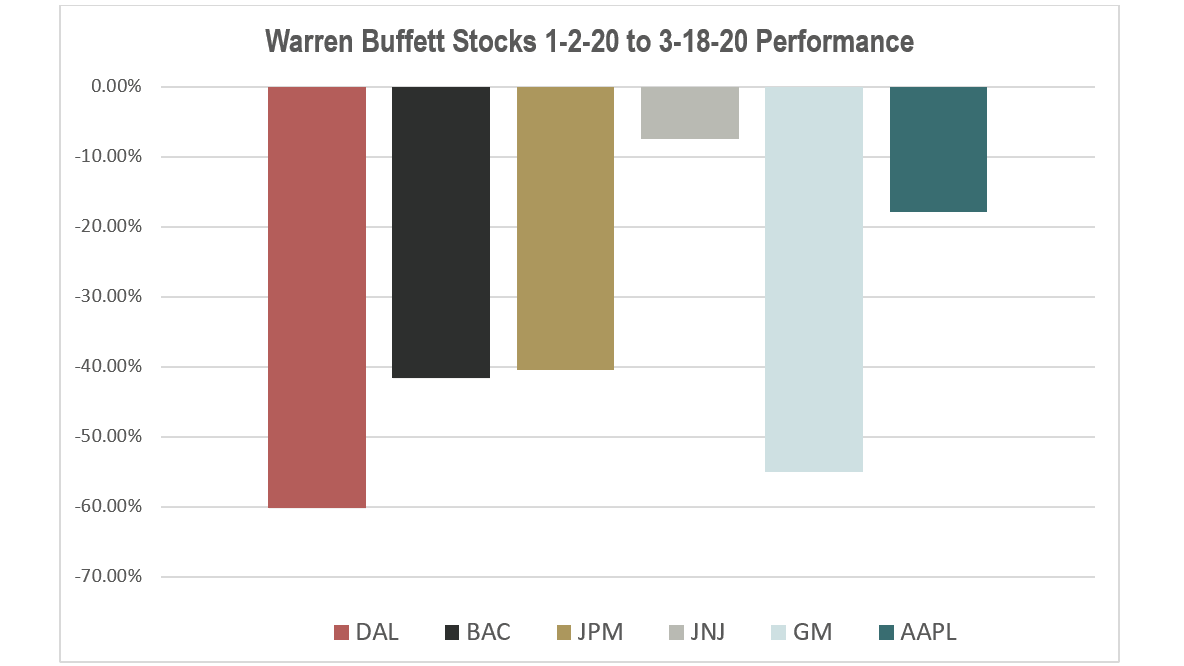 The foregoing should not be taken to imply that buying major value stocks like General Motors, Bank of America and Delta at what appear to be depressed prices is without risk.  The impact of the virus could turn out be more severe and last longer than currently expected.  Even if the situation with the virus does not worsen, the fear that it might worsen, or the concern that other investors think it might worsen, could drive prices further south.

During stressful periods such as this it is difficult for investors to focus on long-run value.  As my colleague, Aswath Damodaran, puts it, “In periods of pricing tumult, like the last three weeks, it is both futile and perhaps counter productive to try to explain big pricing moves, especially on a day-to-day basis, with the language and tools of value.”  Nonetheless, if you have a strong stomach and sufficient financial staying power to buy and hold through the turbulence, it is periods like the current one that provide opportunities for savvy, patient investors to make impressive returns.  Wait.  Isn’t that how Warren Buffett became a billionaire in the first place?