ValueWalk
Home Business Tesla is a ZERO and Q1 2020 revenue “will be an absolute...

Stanphyl Capital February letter to investors on why Elon Musk’s automaker is in trouble. For example, Tesla Inc. (NASDAQ:TSLA)’s charging network is facing massive competition – and many other reasons the stock is a short. 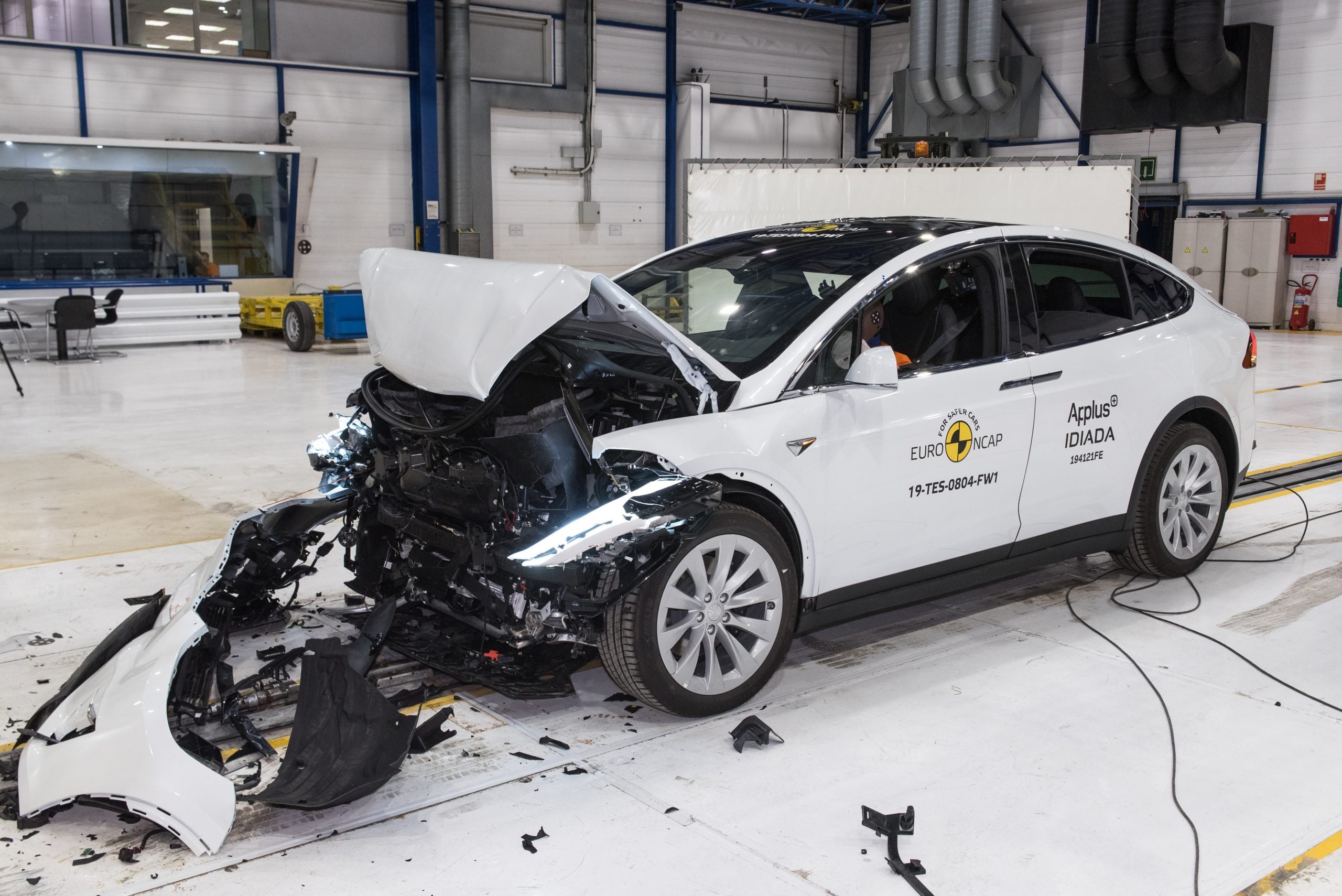 Our longs got plastered this month but our “short QQQ coronavirus hedge” (put on in late January when I felt the market was underpricing that risk, then covered this morning—hopefully not too soon!) worked as intended to limit the damage, and in a refreshing change our Tesla  short position (despite an early-month spike higher) worked well for us this month too. 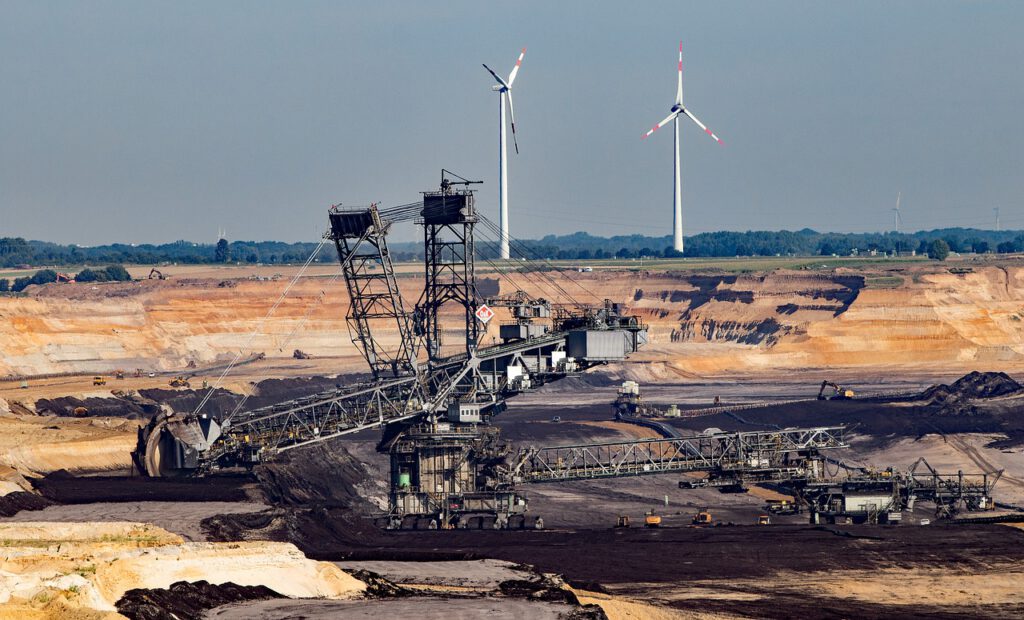 As noted above, we remain short Tesla Inc. (TSLA), which I still consider to be the biggest single stock bubble in this whole bubble market. The core points of our Tesla short thesis are:

In February Tesla sold $2.3 billion of stock to raise cash exactly two weeks after Elon Musk said in the quarterly conference call “it doesn’t make sense to raise money because we expect to generate cash despite this growth level.” In other words, if Elon Musk’s lips are moving, there’s an excellent chance he’s lying.

In January Tesla reported $105 million in earnings for the fourth quarter of 2019 (entirely from the sale of regulatory emissions credits, not from a self-sustaining auto business), which was down 25% from Q4 2018, while revenue was up just 2% and the full-year loss was $862 million. If we compare the second half of 2019 to the second half of 2018, Tesla revenue fell 3% and net income fell 45%, and in Q4 U.S. revenue fell 34%. Yet somewhere out there is a mass of idiots bidding this stock to the moon because they think it’s a “hypergrowth” company. Liam Denning at Bloomberg did an excellent job of pondering that absurdity.

Additionally, Tesla’s “earnings” are typically inflated by at least $200 million per quarter due its massive ongoing warranty fraud, so in reality the company likely lost money in Q4; here’s an excellent Seeking Alpha article explaining some of this.

Yet even with all that fraud, here (courtesy of my friend @Montana_Skeptic) is a great historical chart of Tesla’s earnings track record despite billions of dollars in public subsidies: 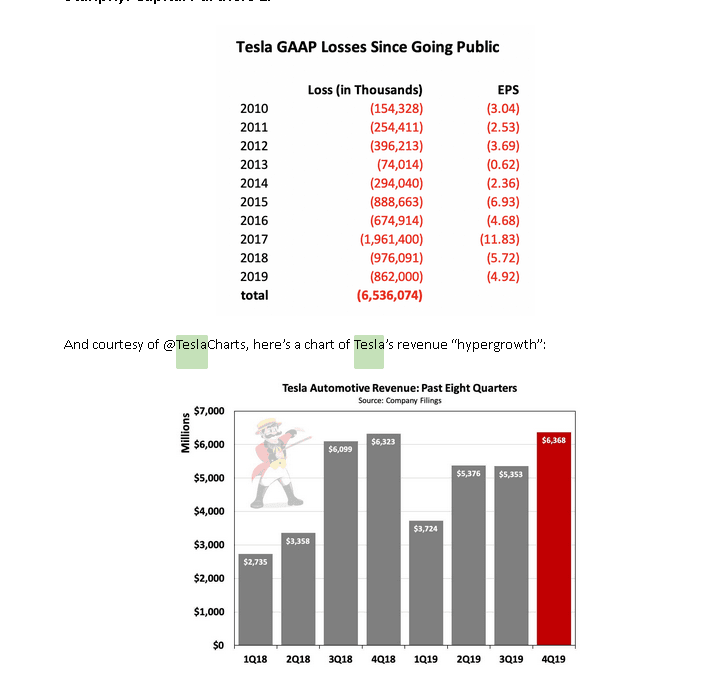 And Q1 2020 revenue (the quarter we’re in now) will be an absolute disaster.

As for the nonsensical earnings conference call, this quote from Musk about when so-called “Autopilot” will be “feature complete” may have been the highlight:

“feature complete just means like it has some chance of going from your home to work let’s say with no interventions. So, that’s — it doesn’t mean the features are working well, but it means it has above zero chance. So I think that’s looking like maybe it’s going to be a couple of months from now.”

That insane statement prefaces Musk’s desire to recognize approximately $500 million of non-cash (it’s already on the balance sheet) deferred revenue from its fraudulently named “Full Self-Driving” (the capabilities of which offer nothing of the kind), thereby turning a future money-losing quarter (likely Q2 2020) into one showing paper profits. Meanwhile, God only knows how many more people this monstrosity unleashed on public roads will kill, despite February’s NTSB hearing condemning it as dangerous.

For those of you looking for a resumption of growth from Tesla’s upcoming Model Y when it launches in March, demand for that car is reportedly disastrous. This is unsurprising, as it will both massively cannibalize sales of the Model 3 sedan and (later this year and in 2021) face superior competition from the much nicer electric Audi Q4 e-tron, BMW iX3, Mercedes EQB, Volvo XC40 and Volkswagen ID Crozz, while less expensive and available now are the excellent new all-electric Hyundai Kona and Kia Niro, extremely well reviewed small crossovers with an EPA range of 258 miles for the Hyundai and 238 miles for the Kia, at prices of under $30,000 inclusive of the $7500 U.S. tax credit. Meanwhile, the Model 3 will have terrific direct “sedan competition” later this year from Volvo’s beautiful new Polestar 2, the BMW i4 and the premium version of Volkswagen’s ID.3.

And if you think China is the secret to the resumption of Tesla’s growth, let’s put that market in perspective (assuming the recent coronavirus disaster is temporary): prior to a recent 10% VAT exemption Tesla was selling around 30,000 Model 3s a year there, and “the story” is that avoiding the 15% tariff and 10% VAT, plus a $3600 EV incentive will allow it to sell a lot more.

However, the rule of thumb for the elasticity of auto pricing is that every 1% price cut results in a sales increase of up to 2.4%. If we assume a 2.4x “elasticity multiplier,” domestically produced Model 3s that are 33% cheaper would result in annual sales of just 54,000 (33% x 2.4 = 79% more than the previous 30,000), meaning Tesla’s new Chinese factory would be a massive money-loser by running at just slightly more than 1/3 of its initial 150,000-unit annual capacity and 1/10th of the capacity it will have two years from now.

This guarantees hugely missed growth targets and it is “growth” (or more accurately, the fantasy of growth) that drives Tesla’s stock price. And here’s a great overview of what a dogfight the Chinese EV market has become.

Meanwhile, Tesla has the most executive departures I’ve ever seen from any company; here’s the astounding full list of escapees. These people aren’t leaving because things are going great (or even passably) at Tesla; rather, they’re likely leaving because Musk is either an outright crook or the world’s biggest jerk to work for (or both). In January Aaron Greenspan of @PlainSite published a terrific treatise on the long history of Tesla fraud; please read it!

In May Consumer Reports completely eviscerated the safety of Tesla’s so-called “Autopilot” system; in fact, Teslas have far more pro rata (i.e., relative to the number sold) deadly incidents than other comparable new luxury cars; here’s a link to those that have been made public. Meanwhile Consumer Report’s annual auto reliability survey ranks Tesla 23rd out of 30 brands (and that’s with many stockholder/owners undoubtedly underreporting their problems—the real number is almost certainly much worse), and the number of lawsuits of all types against the company continues to escalate– there are now over 800 including one proving blatant fraud by Musk in the SolarCity buyout (if you want to be really entertained, read his deposition!), an allegation that unsafe door handles caused a Tesla driver to burn to death in his car, and evidence that the company secretly rolled back battery performance without compensating owners.

Macan EV to get Taycan platform and tech

Mercedes EQC electric SUV available now in Europe & China and in 2021 in the U.S.

VW’s EV crossover for U.S. will be called ID4

Imagine by Kia will launch as Tesla-fighting halo EV

Rivian electric pickup truck- funded by Amazon, Ford, Cox & others- is on the way

Opel/Vauxhall will launch electric SUV and van in 2020

New Citroen C4 Cactus to be first electrified Citroen in 2020

Meet the Canoo, a Subscription-Only EV Pod Coming in 2021

Daimler and BMW to cooperate on affordable electric car in China

Lexus to launch EV in China taking on VW and Tesla

PSA to accelerate rollout of electrified vehicles in China

Mazda to roll out China-only electric vehicles by 2020

CHJ Automotive begins to accept orders of Leading Ideal ONE

Infiniti to launch Chinese-built EV in 2022

Tesla has a self-driving strategy other companies abandoned years ago

Hyundai and Kia Invest in Aurora

Baidu kicks off trial operation of Apollo robotaxi in Changsha

BMW and Tencent to develop self-driving car technology together

PSA to assemble batteries for hybrid, electric cars in Slovakia

Volta is rolling out a free charging network

E.ON and Virta launch one of the largest intelligent EV charging networks in Europe

Smatric has over 400 charging points in Austria

Allego has hundreds of chargers in Europe

BP Chargemaster/Polar is building stations across the UK

Instavolt is rolling out a UK charging network

So in summary, Tesla is about to face a huge onslaught of competition with a market cap larger than Ford, GM and Fiat Chrysler combined, despite selling a bit over 400,000 cars a year while Ford, GM and Fiat-Chrysler sell 5.4 million, 7.7 million and 4.4 million vehicles respectively, generating billions of dollars in annual profit. Thus, this cash-burning Musk vanity project is worth vastly less than its over $130 billion enterprise value and—thanks to nearly $30 billion in debt, purchase and lease obligations—may eventually be worth “zero.”

What do you think of Tesla’s charging network and competition in other areas? Tell us in the comments section!