1) At the ICR Conference, I saw the presentation by Carrols Restaurant Group (TAST), which operates more than 1,000 Burger King and 58 Popeyes restaurants. I was really hoping to like it because a number of smart investors own it, and the stock is down by two-thirds in the past 16 months to a seven-year low. Unfortunately, I didn’t like what I saw.

Here's an overview from my friend Glenn Tongue:

carrols restaurant group is a classic roll-up that's attempting to buy small franchisees at 4 to 5 times EBITDA, implement scale advantages of being a large operator (purchase economies, best practices) to make the acquisition multiples look more like 3.5 to 5 times EBITDA, and then have the public markets value the whole thing at 8 times EBITDA.

There are plenty of franchisees run by entrepreneurs who are ready to exit their businesses, and Carrols is a natural buyer. In addition, it had a right of refusal to purchase franchisees in its target geographies – a result of the original agreement between Carrols and the parent franchisor. Other attractions of this strategy would include overhead leverage, good access to capital markets, and historical outperformance in terms of same store sales and store level operating margins.

I visited the company headquarters in Syracuse years ago and got to know the CFO, the late Paul Flanders. My conclusion is that the company is a better-than-average operator in a worse-than-average business. I believe the benefits of scale are offset by some disadvantages, and the perceived attraction of the business doesn't flow through to financial results.

Franchisors operate one of the best business models in the world: high return on invested capital ("ROIC") and margin, low reinvestment needs, consistent predictable cash flows, etc. Franchisees, on the other hand, are often the inverse: low margins, low ROIC, and material reinvestment needs. Operating restaurants is a tough business, where you really have to "watch the nickels." While an owner/manager can do well as an entrepreneurial sole proprietor, it's very difficult for large chains to find employee managers who have anywhere near the same level of commitment. And Carrols is at the bottom of the quick-serve-restaurant food chain.

From a financial perspective, the company was operating stubbornly in the 8% to 10% ROIC level. The company issued senior secured debt a few years ago at 8% – not a particularly attractive level and not much below its ROIC. The company's better-than-systemwide same-store sales and unit margins were a result of excess capital investments, not superior operations. Though revenues have grown nicely, overhead costs have risen as fast or faster – so the company has generated very little cash.

Bottom line: the company does "what it does" well, but "what it does" doesn't create much value. Popeye's is a new reason for hope, but ultimately I don't see much opportunity to generate free cash flow with this business model. Like any business, there's a price that would be an attractive entry point... but I'm not seeing that right now.

Thank you, Glenn. To reinforce his points, take a look at some quick charts I put together with CapitalIQ. The first shows anemic operating cash flow combined with high capital expenditures – resulting in negative cumulative free cash flow over the past six years: 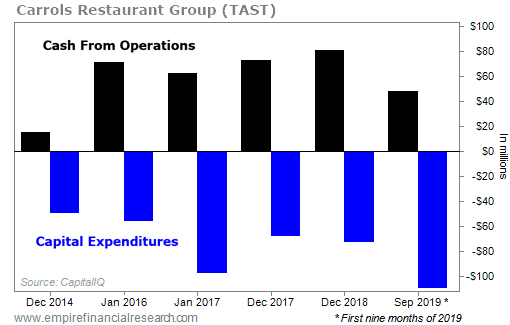 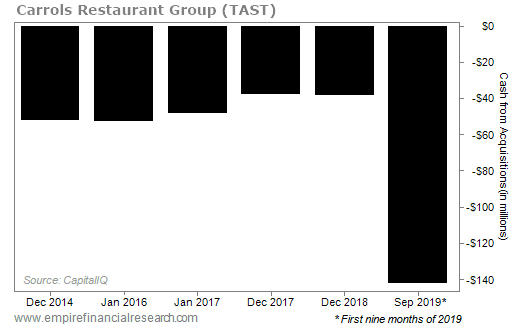 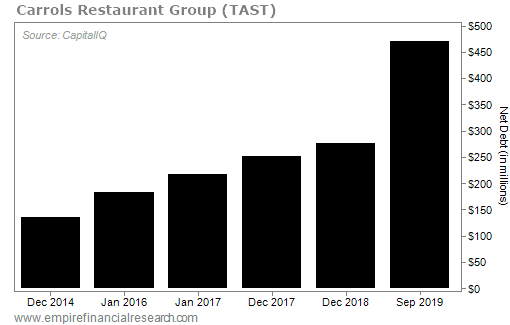 In summary, I would never short Carrols... but it's not the kind of turnaround in which I would invest.

2) In addition to Mike Wallace Is Here, which I mentioned in yesterday's e-mail, I watched another documentary during my flights this week that I highly recommend: General Magic. It's the fascinating story of a secretive Silicon Valley startup that was spun out of Apple (AAPL) in 1990 to essentially create the iPhone. It was white-hot when it went public in February 1995 – the stock doubled on the first day – but the company struggled to develop a product that anyone wanted to buy and it eventually filed for bankruptcy in 2002.

The problem wasn't the people – General Magic attracted the brightest minds of the time, who all went on to have enormous success at other innovative companies. Nor was it the ideas – nearly two decades before the iPhone's 2007 launch, it nailed many of the concepts like apps that made it the most revolutionary, successful product in history. Rather, the technology simply didn't exist back then to turn General Magic's engineers' ideas into reality...

The documentary gets great reviews – here's one from the New York Times: A Startup Before Its Time.

You can watch it with a free trial on Hulu and Showtime, for $0.99 on Amazon Prime Video, or for $3.99 on YouTube or Google Play.