Bill Gates, the billionaire who is the co-Founder and prior CEO of Microsoft Corp is followed by many small value investors. He has proven himself as both an entrepreneur and CEO. He is currently the second richest person in the world due to his ownership of Microsoft stock. His total wealth is currently over $116 billion. His relative ranking fluctuates depending on Microsoft’s stock price. Gates has also invested his fortune partly in stocks other than Microsoft. In fact, his personal Microsoft holdings are now much less than when he was a CEO. Diversification is good practice even for a billionaire as it reduces risk. Bill Gates does not directly make his own or his Foundation’s investments. That responsibility belongs to wealth manager, Michael Larson, who manages Cascade Investments. Bill Gates controls Cascade Investments. Larson manages both Bill Gates’ personal wealth and the investments of the Bill and Melinda Gates Foundation Trust.

The Dollar Value Of The Portfolio

Of the two portfolios there is more information on the Foundation’s holdings. Larson’s stock picking approach is conservative seemingly generating decent returns without significant volatility. Many of the stocks are often dividend paying stocks. Many also qualify as dividend growth stocks. As many investors know, dividend stocks have higher returns with lower volatility over time. Turnover is low and the portfolio is very concentrated with only about 18 to 20 stocks at any given reporting period. The great majority of the Trust's dollar value is in the top 5 holdings.

At the end of Q3, 2019, the portfolio was dominated by the top five companies, which are Berkshire Hathaway (BRK.B), Waste Management (WM), Canadian National Railway (CNI), Caterpillar (CAT), and Walmart (WMT). Together they accounted for just over 84% of total assets. The total market value was $21,225,872M. Market action has likely increased this value since then. There is a total of 18 different holdings but 16 different companies. The Trust owns different share classes of Liberty Global (LBTYA) and Liberty Latin America (LILA).

The trust makes few changes each year to the portfolio. But in early 2019 the Trust sold its entire position in Walgreens Boots Alliance (WBA). Walgreens is facing challenges with declining reimbursements that is pressuring margins. In the most recent reporting period, the Trust started positions in Beyond Meat (BYND) and Cornerstone Building Brands (BNR). These are the smallest positions in the Trust. Gates reportedly invested in Beyond Meat well before it went public in 2019, so his trust did not purchase shares recently. Meanwhile, Cornerstone was formed in May 2019 after two building products companies merged, making it the leader in windows, siding, and metal roofing in North America.

Below is the list of top holdings and dollar values in Bill Gates' Trust. Note that the dollar values are based on those in the 13F form submission and not current market value. 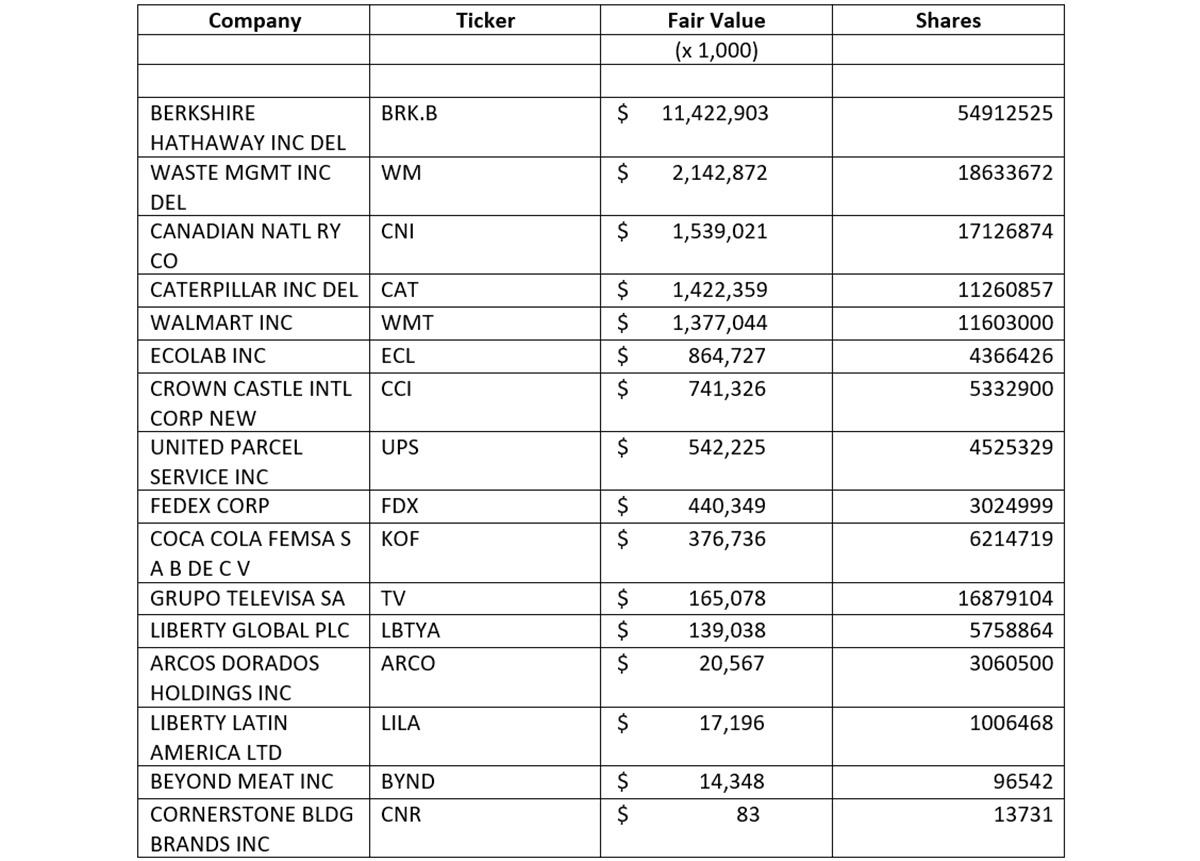