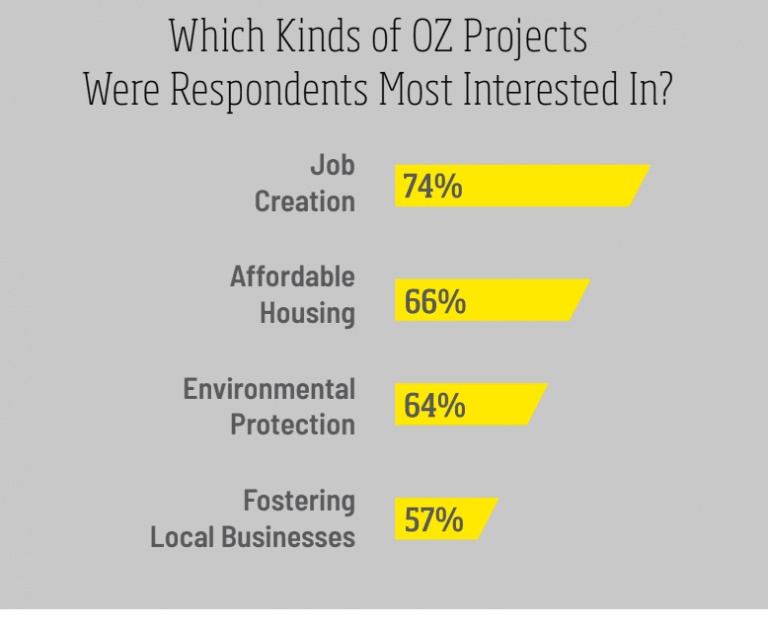 A new study commissioned by Lighthouse.one, the Opportunity Zone investment platform, surveyed 1,000 U.S. adults with an interest in investing to better understand their feelings around choosing ventures that support local communities and benefit society as a whole. One theme was clear: 90 percent of respondents would prefer to invest in a project that benefits society if they made the same amount of profit. In fact, almost two-thirds of all respondents would choose a venture that yielded less profit because it benefited their communities.

With the establishment of Opportunity Zones in the 2017 Tax Cuts and Jobs Act, we have a tremendous opportunity to incentivize investment in economically-distressed communities.

There are 8,700 Opportunity Zones (OZs) across the United States defined by low-income census tracts. The aim of this new bi-partisan legislation is to provide economic stimulus by granting significant tax benefits to those who invest in OZs.

The idea of tax-free OZ investments was attractive to more than three-quarters of those surveyed. Taxes on capital gains from Opportunity Zone projects can be deferred until 2026, or whenever the OZ investment is sold, and 10 or 15 percent of the original gains invested will be exempt from federal taxes if the investor has remained committed for 5 or 7 years, respectively. After 10 years or longer, any capital gains from an OZ investment are exempt from taxes.

When asked what entices them most about OZ investments, 73 percent responded that helping others is one of the most important aspects, while 27 percent indicated reduced taxes as most important. Despite the contrast in reasons to invest, 89 percent of all respondents said that they would want to reinvest capital gains in another venture whose profits would be tax-free, like an Opportunity Zone. While community uplift is overall the top priority, the financial and tax incentives bring an added layer of appeal.

With the legislation only two years old, over three-quarters of all respondents had never heard of OZs. Of those familiar with OZs, 27 percent had already invested in these areas, while 73 percent had not. Almost twice as many of those surveyed that identified as conservative (49 percent) had invested in OZs as liberal (21 percent), further demonstrating the bipartisan appeal of this legislation.

For those who had not yet invested, the primary barriers were not knowing where or how to find projects (45 percent), followed by how to evaluate the projects (43 percent). With abundant opportunities available to invest in communities across America, and a majority of people willing to help, the only missing piece is a platform that connects investors to funds and projects, and effectively evaluates those ventures.

Other Interesting Stats Include: