ValueWalk
Home Technology OnePlus 7T vs iPhone 11: Which one is worth your money?

Just weeks after Apple unveiled the iPhone 11 series, Chinese vendor OnePlus has launched the OnePlus 7T. The 7T is not OnePlus’s “premium” offering. It’s the successor to the OnePlus 7, which debuted only a few months ago. The OnePlus 7 Pro will remain the company’s premium device until the OnePlus 7T Pro arrives. That’s getting quite confusing. So, let’s come back to the OnePlus 7T, which will be competing with Apple’s relatively ‘affordable’ iPhone 11. In this OnePlus 7T vs iPhone 11 comparison, let’s check out which device is worth your money.

The OnePlus 7T borrows a lot of features from OnePlus 7 Pro, including the triple rear camera, a faster refresh rate, and the fast charging technology. The iPhone 11 doesn’t have the ‘R’ letter in its name like last year’s iPhone XR, but it’s the successor to the iPhone XR. Apple’s ‘premium’ offerings of 2019 are the iPhone 11 Pro and iPhone 11 Pro Max (unfortunately, the brilliant minds at Apple’s spaceship headquarters couldn’t find a longer name than that).

The OnePlus 7T, despite being the company’s latest offering, is not as premium and stylish as the OnePlus 7 Pro. It doesn’t have a pop-up selfie camera or a notch-less design. Instead, the phone has a tiny teardrop notch at the top of the screen to house the selfie camera. The OnePlus 7T measures 160.94 x 74.44 x 8.13 mm and weighs 190g.

Its rear panel is curved on the sides, making it easier for users to hold the phone comfortably in hand. On the back panel, it has a triple camera setup and an LED flash encased in a black circle, similar to Motorola phones. OnePlus has launched the device in Glacier Blue and Frosted Silver color options.

The 7T doesn’t have a 3.5mm headphone jack, neither does the iPhone 11. The OnePlus phone also lacks water-resistance, though it can survive a little bit of rain or splashes. The iPhone 11 comes with an IP68 rating for water-resistance, which enables it to remain submerged in up to 2 meters deep water for up to 30 minutes.

The new OnePlus phone features an optical in-display fingerprint sensor for authentication and security. It also has a 2D facial recognition technology, but that’s not secure enough to authorize financial transactions. The iPhone 11 comes with Apple’s improved Face ID technology, which takes a 3D image of your face to securely unlock the phone and authenticate payments.

The iPhone 11 measures 150.9 x 75.7 x 8.3 mm and weighs 194g. It’s only slightly heavier than its rival, though it’s not as tall as the OnePlus device. The iPhone 11 brings no major design changes over its predecessor. It has a wide notch at the top to house the Face ID sensors, selfie camera, and the ear speaker.

The iPhone 11 has front and rear glass panels supported by a metal frame in the middle. On the back panel, it has a dual-camera setup housed in a square module. The iPhone 11 is available in a bunch of flashy colors including White, Black, Green, Yellow, Purple, and (PRODUCT)RED.

In short, the OnePlus 7T has a better display than the iPhone 11. It features a 6.55-inch Fluid AMOLED display with a waterdrop notch. It offers Full HD+ resolution of 1080 x 2400 pixels with 20:9 aspect ratio and 402ppi of pixel density. It supports HDR10+ with sRGB and DP3 color gamuts.

The 7T display has a reading mode that reduces saturation to make it easier to read on the phone. One of the biggest highlights of OnePlus 7T is its 90Hz refresh rate, which makes a huge difference when you are playing games or watching videos.

The iPhone 11 features a 6.1-inch LCD screen, which Apple refers to as Liquid Retina display. The Cupertino company has tweaked the LCD panel to offer more vibrant colors, but it’s still not as good as the OLED panel of OnePlus 7T.

The device supports HDR and True Tone technology which optimizes the screen brightness and color saturation based on ambient lighting. The iPhone 11 has a resolution of 828 x 1792 pixels with a relatively lower 326ppi of pixel density.

The OnePlus 7T runs Qualcomm’s latest Snapdragon 855 Plus processor paired with Adreno 640 GPU. The Plus version offers 15% better graphics than the regular Snapdragon 855. The Snapdragon 855 Plus gets a fourth-generation AI Engine capable of performing more than 7 trillion operations per second. It enhances the AI, AR, and VR experiences.

The 7T packs 8GB RAM with 128GB or 256GB storage options. The company doesn’t offer a microSD card slot on its devices, so you’d want to buy the higher storage model if you can afford it. OnePlus uses the latest UFS 3.0 storage technology. The device is powerful enough to run even the most demanding mobile games.

The OnePlus phone runs Google’s latest Android 10 operating system out of the box. It has the company’s custom OxygenOS 10 skin on top of Android 10, but OnePlus doesn’t load its devices with bloatware. The OxygenOS 10 experience is pretty close to that of the stock Android. It has system-wide Dark Mode, Digital Wellbeing, Zen Mode, and Reading Mode.

OnePlus 7T is powerful enough to handle any task you throw at it, but it’s not as powerful as the iPhone 11. Apple’s device runs a hexa-core 64-bit A13 Bionic processor with a custom quad-core GPU and an octa-core Neural Engine. The upgraded Neural Engine is capable of performing up to 10 trillion tasks per second.

Apple hasn’t revealed the amount of RAM on its phones, but various teardowns suggest the device packs 4GB RAM. It’s available in three different storage options of 64GB, 128GB, and 256GB. Just like OnePlus 7T, it lacks support for external storage. If you like to keep a lot of photos, videos, and movies on your phone, you’d want to buy the highest storage option you can afford.

The new iPhone runs iOS 13 software out of the box. It brings a system-wide Dark Mode, a revamped Files app, Sign in with Apple, better privacy controls, a swipable keyboard, and more.

The OnePlus 7T packs a 3,800mAh battery, which is large enough to get you through a full day of normal-to-heavy usage. The company has added support for a new Warp Charge 30T charging technology. It delivers 70% charge in just 30 minutes. One thing I really like about OnePlus devices is that once you’ve fully charged them, you don’t have to worry about battery life until the next day.

Apple doesn’t share the battery capacity of iPhones. A TENAA listing suggested that the iPhone 11 features a 3,110mAh battery. It supports 18W fast charging as well as wireless charging. Since Apple controls both hardware and software of its smartphones, it can tightly integrate them to offer a good battery life even with a decent battery capacity.

According to Apple, the iPhone 11 battery lasts up to one hour longer than iPhone XR, which had a pretty good battery life. The iPhone 11 provides up to 17 hours of video playback and up to 65 hours of audio playback. Apple claims the 18W fast charger delivers 50% charge in just 30 minutes.

The OnePlus 7T has three camera lenses arranged in a circular module on the back panel. The setup consists of a 48MP primary lens with OIS, EIS, and an f/1.6 aperture; a 12MP telephoto lens with f/2.2 aperture; and a 16MP ultra-wide angle sensor with f/2.2 aperture. It offers up to 2x optical zoom. The device can shoot 4K videos at 60fps and slow-motion videos at up to 960fps at 720p resolution.

For selfies, the OnePlus 7T gets a 16MP lens with fixed focus, EIS, and f/2.0 aperture. The rear camera captures sharp and colorful photos. The device has a Macro Mode that lets users click pictures of objects close to the camera. Other features include a Night Scape Mode, and portrait mode.

The iPhone 11 has a dual-camera setup on the back. It includes a 12MP wide-angle lens with f/1.8 aperture and OIS; and a 12MP ultra-wide angle lens with 120-degree field of view and f/2.4 aperture. It doesn’t have a telephoto lens, but it can take portrait images with blurred backgrounds. The device offers a 2x optical zoom and 5x digital zoom.

For selfies, it has a 12MP camera with f/2.2 aperture. The selfie camera gets a new feature called “Slofies” to take slow-motion selfies. The front camera also supports Portrait mode, 4K video recording, Animoji, and Memoji.

The OnePlus 7T has a starting price of $599. In the US, customers will be able to buy it through T-Mobile or an unlocked version directly from OnePlus’s website. The device will also work on AT&T and Verizon’s networks.

On the other hand, the iPhone 11 has a starting price of $699 for the base model with 64GB storage. The 128GB model costs $749 while the 256GB version has been priced at $849. However, Apple is running a trade-in program that dramatically reduces the price of the phone depending on your current device.

So, which device is worth your money? It’s the OnePlus 7T. The new OnePlus phone has a gorgeous OLED display, 90Hz refresh rate, a triple camera setup, the latest Snapdragon 855 Plus processor, blazing fast charging, and a lower price tag. 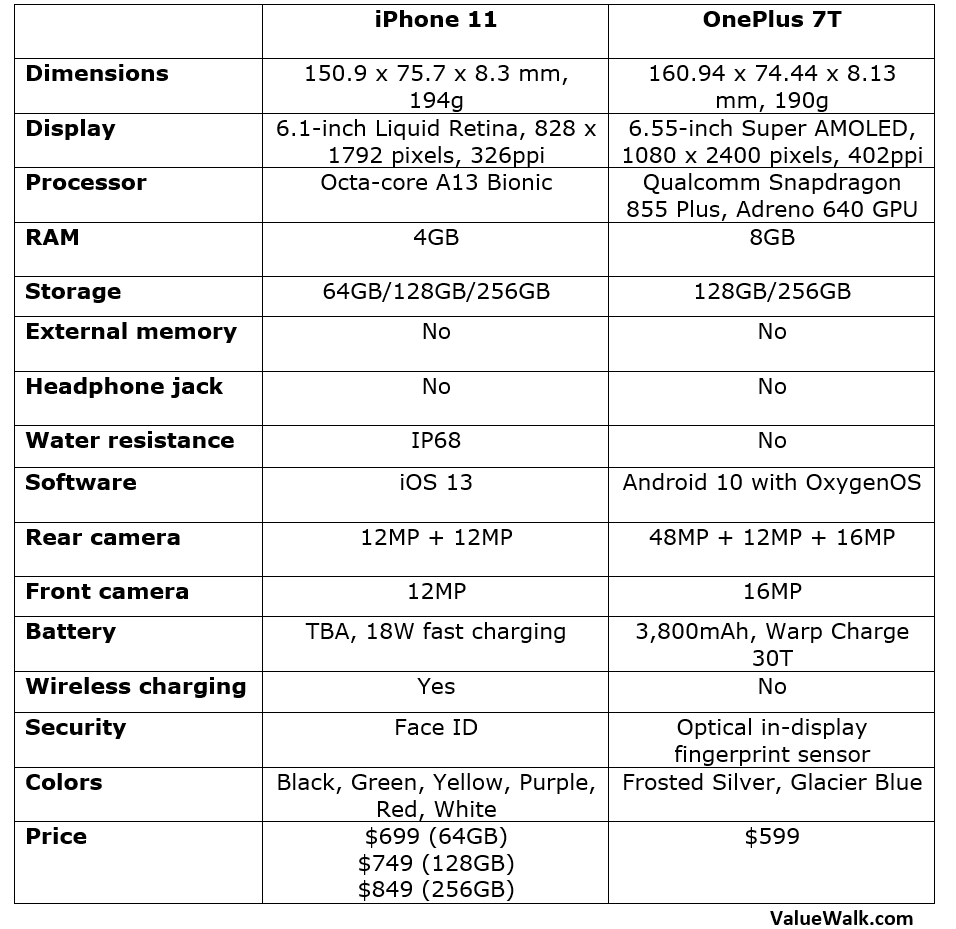