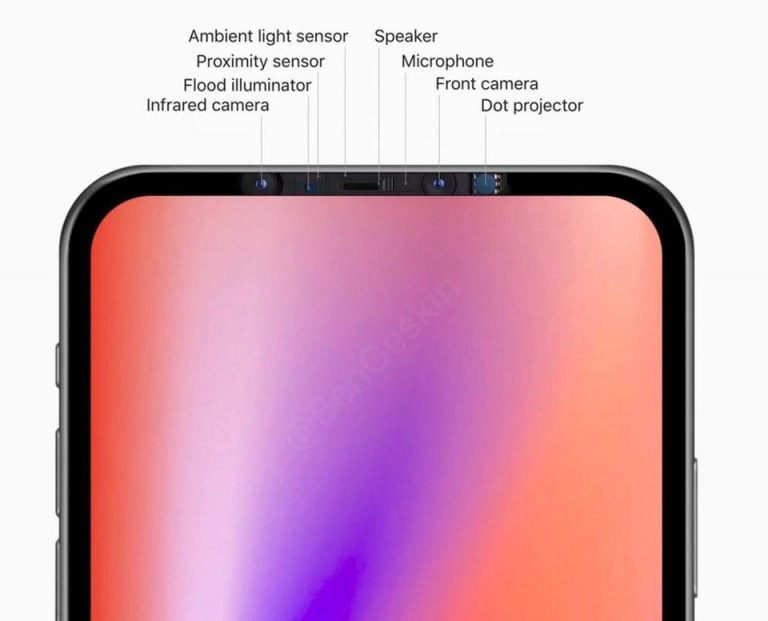 Apple has just released the iPhone 11, 11 Pro, and 11 Pro Max models. It might be too early to start talking about the next year’s iPhone 12 models. But there is no doubt that Apple is already working on the 2020 iPhones, which are expected to bring major design changes and exciting new features. Now a tipster and concept designer has shared what the 2020 iPhone 12 Pro Max could look like.

Is this the iPhone 12 Pro Max?

We don’t know what the 6.7-inch model would be called. For the sake of convenience, let’s refer to it as iPhone 12 Pro Max for now, considering it would succeed the 11 Pro Max. Tipster Ben Geskin said on Twitter that Apple has created at least one prototype of the 6.7-inch iPhone with no notch and incredibly slim bezels around the display.

Exclusive: One of the 2020 iPhone prototypes has 6.7-inch display with Face ID and TrueDepth camera system housed in the top bezel. pic.twitter.com/sAJE7J12ty

Apple introduced the notch with the iPhone X to accommodate the Face ID sensors, front camera, and ear speaker while expanding the display real estate. Not all iPhone users like the notch, and many wanted Apple to ditch the top cutout. If Geskin’s render is to be believed, a notch-less iPhone could launch as early as next year.

Instead of the notch, the Face ID sensors, selfie camera, and the ear speaker will be housed into a slim bezel at the top of the screen. Geskin created the concept render to visualize the prototype of the 6.7-inch iPhone 12 Pro Max. Ben Geskin has revealed several accurate details about unannounced iPhones in the past.

It could be one of the several prototypes that Apple is working on. There is no guarantee that the design shared by Geskin would make it to mass production. But many analysts have predicted that Apple would reduce the notch on iPhones in 2020 or 2021.

Ming-Chi Kuo told investors in a research note earlier this week that the 2020 iPhones would take design cues from the iPhone 4, which had a flat stainless steel frame. The current iPhones have curved frames on all sides. The latest iPad Pros also have flat edges. The upcoming iPhones would have a flat metal frame with a glass back.

According to Kuo, Apple is going back to the iPhone 4-like design to improve the 5G antenna performance. All three models of the 2020 iPhone would feature Qualcomm’s 5G modem for 5G connectivity. Apple has been lagging behind its Android rivals in 5G race.

Though Apple has acquired Intel’s smartphone modem business to build its own baseband, the company will have to rely on Qualcomm modems for at least a couple of years. Kuo predicts the first iPhones featuring Apple’s own 5G modems won’t hit the store shelves until 2022 at the earliest. The Cupertino company would first introduce its modem with Apple Watch and other devices before adding it to iPhones.

The analyst believes that the premium models – the 5.4-inch and 6.7-inch ones – would feature a Time-of-Flight 3D camera on the back to enhance the photography experience and support augmented reality. The 6.1-inch model would sport an OLED display and 5G, but it is said to be more affordable than the other two.

Bloomberg contributor Mark Gurman has predicted that the 2020 iPhones would feature both the Face ID technology and an in-display fingerprint sensor. Both authentication methods would work simultaneously and combine the data to further strengthen security. Gurman added that the feature could also be delayed to 2021.

Thanks to the design overhaul and exciting new features, Ming-Chi Kuo predicts the 2020 iPhones would trigger a massive upgrade cycle. The iPhone 12 series would boost Apple’s new smartphone shipments to 85 million in 2020, up from the estimated 75 million new iPhones in 2019.