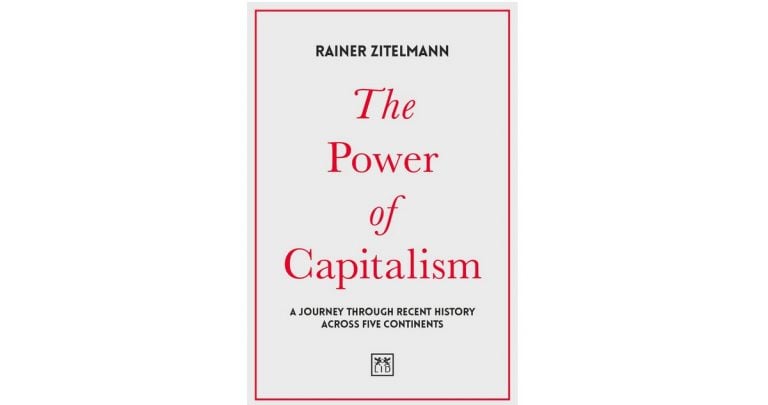 According to recent opinion polls, a majority of young voters in the United States say they would prefer to live under a socialist rather than a capitalist system. Among the Democratic Party’s candidates for the 2020 presidential election, several of the runners have been extremely sharp with their anti-capitalist rhetoric. The “rich” have been placed in the dock, blamed as scapegoats for all of the world’s many ills. Thirty years on from the collapse of socialism, capitalist countries have been forced on to the defensive as socialist ideologies attract more and more approval.

Since the outbreak of the 2008 financial crisis, criticism of capitalism has taken on a new dimension: Apparently, the market economy has failed, thus we need more government intervention. Critics like to compare utopian visions of a “just” society with reality – of course, reality comes off badly. In my book The Power of Capitalism, I compare the experiences of people all over the world who have lived under different forms of socialism with those in capitalist societies.

Capitalist Countries And Their Forgotten Experiences of the Past

At the end of the 1950s, 45 million people died in China as a result of the socialist experiment that Mao called the “Great Leap Forward.” Most died of hunger. After Mao’s death, the previously omnipotent state and its planned economy was gradually scaled back, more and more space was given to the market, and private property was reintroduced. Result: Hundreds of millions of Chinese rose from poverty to the middle class.

In the GDR, communists spent decades proclaiming that the socialist planned economy would overtake the capitalist West economically. When the GDR collapsed, 16 percent of households had a telephone, compared with 99 percent in West Germany. East Germans had to wait 12 to 17 years for a Trabant (a no-frills East German car) – in West Germany, every citizen could go to a car dealership and choose from a wide selection of quality vehicles.

Before Korea was divided into a capitalist south and a communist north in 1948, it was one of the poorest countries in the world, comparable to sub-Saharan Africa. South Korea has experienced an incomparable ascent thanks to its capitalist approach. We all know and use products from companies such as LG and Samsung, and people in South Korea live in prosperity. North Korea, on the other hand, with its state-run planned economy, is as poor as it gets; on numerous occasions, famines have cost the lives of hundreds of thousands.

Capitalism has also proven its superiority in South America: Venezuela was one of the richest countries in the world 50 years ago. It became poorer and poorer as a result of state over-regulation, and the final decline began with the rise to power of the socialist Hugo Chávez, so admired by anti-capitalist intellectuals. Chile, on the other hand, is one of the most capitalist countries in the world, and its people are better off than ever before. In the last 30 years, Chile’s economy has grown by about five percent a year, while in Venezuela, the country with the world’s largest oil reserves, inflation is higher than anywhere else in the world.

The Myth of Nordic Socialism

Supporters of Bernie Sanders are raving about “socialism.” To them, socialism doesn’t mean a system like the one we saw in the old Soviet Union, but the dream of a “democratic socialism” based on the Scandinavian model. They frequently cite Sweden, for example, as a role model. But their dream is based on a massive misunderstanding. Although there are areas – especially taxes and labor market regulation – where socialist elements still exist, Sweden is by no means a socialist country today. In fact, according to the Heritage Foundation’s ranking of economic freedom, it is one of the 20 most capitalist countries in the world.

The image of Sweden and other Scandinavian countries as strongholds of socialism harks back to the 1970s and 1980s. Until the mid-1960s, there were no significant differences between Sweden and other European countries and nothing that could be defined as a distinct ‘Swedish model.’ In the late 1960s, government spending was still in the same ballpark as average levels across the OECD states. However, this would change during the late 1960s, the 1970s and the 1980s. In the period between 1965 and 1975, the number of civil servants grew from 700,000 to 1.2 million, alongside increasing government intervention in economic affairs and the creation of a number of new regulatory authorities. Between 1970 and 1984, the public sector absorbed the entire growth of the Swedish workforce, with the largest number of new jobs created in social services.

It is well worth taking a closer look at the development of two key groups over time. In 1960, for every 100 ‘market-financed’ Swedes (i.e. those who derived their income predominantly from private enterprise), there were 38 who were ‘tax-financed’ (i.e. dependent on the public sector for their income, whether as civil servants or as recipients of payments from the state). Thirty years later, that number had risen to 151. During the same period, the total number of those employed or self-employed in the market sector fell from just under 3 million to just under 2.6 million, while the total number of tax-financed individuals grew from 1.1 million to 3.9 million. These figures reflect Sweden’s move away from a capitalist countries to a socialist model during that period.

The socialist agenda damaged the Swedish economy and resulted in prominent entrepreneurs leaving the country in frustration. Ikea founder Ingvar Kamprad was one of them. In 1974, he moved to Denmark and later to Switzerland, where he spent the next few decades – for a time as the wealthiest man in Europe. The economic situation in Sweden deteriorated as a direct result of extreme labor market regulation and the constant expansion of the role of the state, which led to massive dissatisfaction among the population.

But pushback against the proponents of socialist ideas increasingly gathered momentum, and by the 1990s, there was a comprehensive counter-movement that – without fundamentally questioning the Swedish model of high taxes and comprehensive welfare benefits – nevertheless eliminated many of its excesses. A major tax reform in 1990/91 slashed corporate taxes from 57% (including payments into workers’ funds) to 30%. Income from shares was exempted from taxation, while capital gains from shares were taxed at only 12.5%.

The reforms continued over the following years: in 2004, the estate and accession tax of up to 30% was scrapped. The abolition of the wealth tax, which had already been cut, came into effect retroactively as of January 1, 2007. The corporate tax rate of 30% was cut to 26.3% in 2009 and to 22% in 2013. Property tax rates were also cut substantially.

The swingeing reforms implemented during the 1990s did provide correctives to quite a few harmful developments, including cuts to unemployment benefits and the introduction of a five-day waiting period. Between 1993 and 2000, social spending dropped from 22.2% to 16.9% of GDP, economic subsidies from 8.7% to 1.8% and public-sector payroll costs from 18.2% to 15.6%.

The Swedish population seemed willing to accept that the stripping back of the welfare system resulted in a more drastic decline in equality than almost anywhere else in the world. The Gini coefficient, which measures income distribution, grew by around 30% between the mid-1980s and the late 2000s. Only New Zealand recorded a similar growth in inequality during the same period.

Although contemporary Sweden remains a traditional welfare state in some respects (e.g. it has comparatively high tax rates), successive governments since the early 1990s have consistently chosen more freedom over more equality, more market over more state. Following the obvious failure of the socialist experiment, the balance between capitalism and socialism has shifted towards capitalism.

Are Capitalist Countries Failing to Learn from the Lessons of the Past?

At least 24 different variants of socialism have been implemented in various countries over the last century. And not one of these variants was successful. After the failure of each new variant, socialists fell back on the same well-worn explanation: “Sorry, that wasn’t real socialism. Next time we’ll get it right and everything will be better.” The most recent example: Venezuela. After Hugo Chávez seized power, socialists around the world reacted with unbridled enthusiasm to this latest socialist experiment, hailed as of “Socialism for the 21st Century.” Now that this experiment has also failed – several million people have fled Venezuela and inflation is running at over one million percent – the socialists again return to their tired old mantra: “That was not real socialism.”

In his Lectures on the Philosophy of History, the German philosopher Hegel observed: “But what experience and history teach is this, – that peoples and

governments never have learned anything from history, or acted on principles

deduced from it.” It could well be that Hegel’s verdict is too harsh. Nevertheless, it does seem that a majority of people are unable to abstract and draw general conclusions from historical experience. Despite the numerous examples of capitalist countries and their policies leading to greater prosperity, and the failure of every single variant of socialism that has ever been tested under real-world conditions, many people still seem incapable of learning the most obvious lessons.

Rainer Zitelmann holds doctorates in History and Sociology. He is the author of 23 books. This article is based on his latest book, The Power of Capitalism. http://the-power-of-capitalism.com/