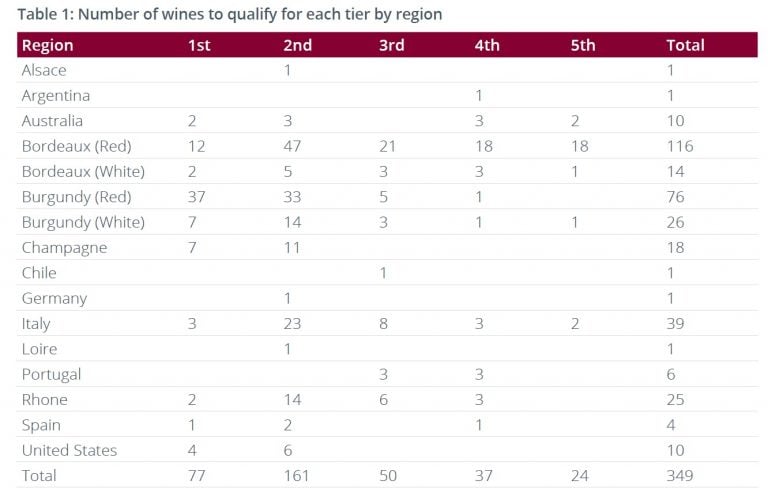 The Liv-ex Classification 2019 is a league table that ranks the wines of the world by their average trade prices on Liv-ex, the global marketplace for the wine trade. Based on the transactional activity of the world’s largest pool of fine wine merchants, it reflects the changing buying patterns of the trade today.

Back in 2009, Liv-ex was inspired by the historical Bordeaux Classification – which was based on price – and chose to create our first classification by applying a similar methodology in the modern day. The Liv- ex Classification of 2009, therefore, ranked the wines of the Left Bank solely on the price that each wine was worth at the time. Since then, we have updated our findings every other year to reflect changing conditions of the market, publishing additional classifications in 2011, 2013, 2015 and 2017.

Since our first classification, we have extended our findings to include second wines and wines of the Right Bank. In 2017, we stretched the ranking beyond Bordeaux to include red wines from around the world for the first time. This year, we have also included white wines to create a classification that covers all wines of the world.

In 2018, 6,012 unique wines (including vintage) traded on Liv-ex, up from 5,587 in 2017, and 4,389 in 2016. The driving factor behind this expansion is the increasingly diverse nature of the secondary market – in particular the growing interest in (and thus market share for) wines from Burgundy, Italy and the New World.

The expansion of the market is further highlighted in this year’s classification, as wines from nine countries qualified: Argentina, Australia, Chile, France (Alsace, Bordeaux, Burgundy, Champagne, the Loire and the Rhone), Germany, Italy, Portugal, Spain and the United States. By comparison, wines from six countries qualified in 2017.

The full methodology for this ranking, including price brackets for each category, is explained in detail at the bottom of this article. To summarise, wines qualify for ranking based on trading activity, but are converted to today’s money and market.

So why, if this is a global classification, do we still use Bordeaux as a reference point?

The original Bordeaux Classification is undoubtedly the world’s most famous, and though the region’s market share has declined in recent years, Bordeaux remains the most important category on the fine wine market. Historically, it has set the standard to which all other regions aspire. By maintaining this benchmark, but using today’s numbers, the tiers not only reflect the changing landscape of Bordeaux, but also how the rest of the world looks by comparison. It also provides a fascinating insight into the price disparity between regions.

Among the 1st tier there were also two wines from Australia, three from Italy, two from the Rhone, one from Spain and four from the United States. We also had one new entrant from Bordeaux’s Right Bank, that had not qualified in previous years, which jumped straight into the 1st tier category.

The following report will delve into the individual countries and regions that qualified, and analyse the wines within each. You can read the methodology used for this year’s classification and see the full rankings in the Appendix.

See the full version of this report here.