ValueWalk
Home Economics The Congo B Rescue Plan And The Armed-Branch Of The French Energy... 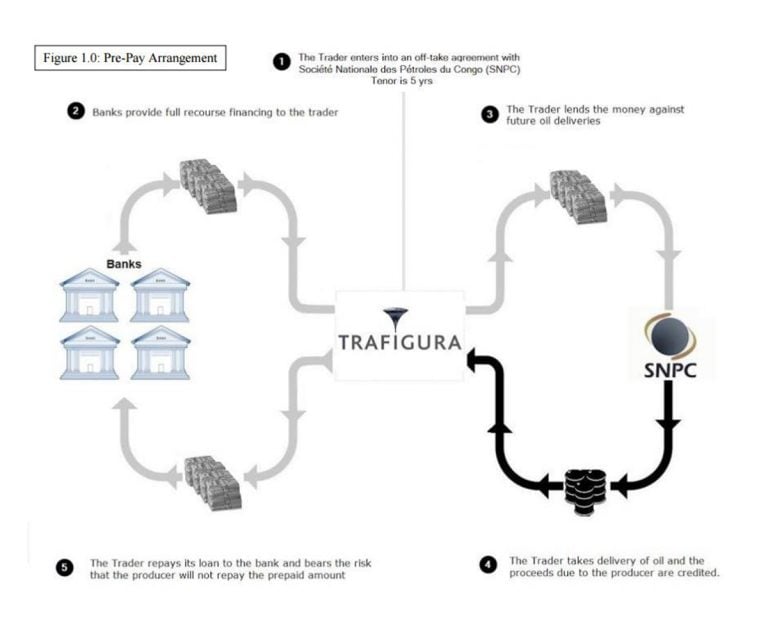 It is finally a committee formed by French-elites and security-domain experts and not the Swiss Traders who finally formalized the solution for the IMF as the former lacked the “institutional trust”.

As we revealed here “Oil-for-Cash loan contracts” were not calculated in the “real” total public-debt of Congo b by the policy makers.

This type of loans that has become the predominant "prodit-center"in the world of Commodity Trading after 2008. [1][2]

But here is what is crucial : the legality of these contracts/owed debt can and will be challenged in an international court.

There is a judicial procedure by Switzerland’s Attorney General underway in Switzerland against Gunvor S.A concerning the same activities in the Congo B this is the variable that was taken into account by the IMF in Washington.[3]

Outline of a Pre-Pay Arrangement via jacquessimon506.files.wordpress

It could be argued that CORAF/SNPC was in the legal incapacity to enter the contracts in the name of the Congo b state or that the contracts debt were rendered ILLEGAL be the failure of the traders parties to disclose all the material facts/fraud and embezzlement.

In Congo b. the "key actor" is the head of state who has a stranghold on oil, and also on the state and pretty much the whole country. One can safely say that he manages the oil and the state according to "his personal desires". [4]

The hidden accounts discovered by the IMF are proof of this.

But beware, if the decline in the price of oil takes place in a situation where he is obliged to comply, or even submit to the requirements of the IMF, it remanis uncertain that he will subject himself to a budgetary discipline, he is at the first test or difficulty.

Politically: In the early hours (PCT) with a political party of Marxist obedience (PCT) with an handful of four leaders. A plot and assassinations to eliminate political leaders and he is found, young officer, at the head of the party. In the mid-1970s, the PCT lost the presidential election, and he fled to France with the support of TOTAL and all the resources; he comes back to a military push in the 90s ... the political figures of his generation were all eliminated.

He is today the oldest head of state in Central Africa and within CEMAC. The national institutions of national integration can only follow, the congolese inteligentisa are far apart and cannot impose on him a rigorous financial management.

Financially: China is also beginning to impose demands on the management and performance of African countries when they are not monitored and the benefits of direct investment (FDI).

China, along with Exim Bank, itself authorized to follow the courses of the last years by obtaining means that i) he could not obtain with the traditional framework controlled by the IMF, and ii) now he is seeking the umbrella of the same IMF to avoid a bankruptcy. iii) Russia announces sending +200 military advisers to Congo B. This military-technical cooperation agreement provides for the operation of war, transport and "communication" materials.

At the same time this constitutes an in-kind insurance policy against a future French-military or proxy-backed forces intervention.

All-out contracts - often without fraudulous and with any legal basis - with trading houses also have their limits.

The search for fresh cash at any price for non-productive spending spree has a price: Congo B has mortgaged not less than 10 years of its GDP.

Today, despite the country oil potential, its management has not safeguarded the future.

The risk is so high that commodity traders have avoided committing themselves.

It is comical that the solution/name emerging in Congo b. from a closed-door meeting by a small group cultivating secrecy is also the same chosen winner by the IMF (TOTAL).

It is finally a commitee formed by french-cenacles in the security-domain and not the Swiss Traders who finally formalised the solution for the IMF. A confidential informant whispers that they- the Traders- lacked the "institutional trust".

Jacques, S and Simondet, A. (2016)“Traders or Commodity Finance Banks” https://jacquessimon506.wordpress.com/2016/09/09/traders-of-commodity-finance-banks, Navigating the commodities markets with Freight and Spreads

Traders SITG Part XIX- Côte d’Ivoire has to be Factored in the Gunvor S.A Affair.

[4] Bankers, far away from the horrors of violence and conflicts can easily rationalize the lucrative fees. Elite money laundering is an aspect of the pervasive problem of failed leadership and lack of accountability that can be found in various parts of the developing world.

Advisor to The Energy Marketers, Merchants, Producers and Banks Specialized in the Financing of The Commodity Trade.

Navigating the commodities markets with Freight and Spreads © 2019