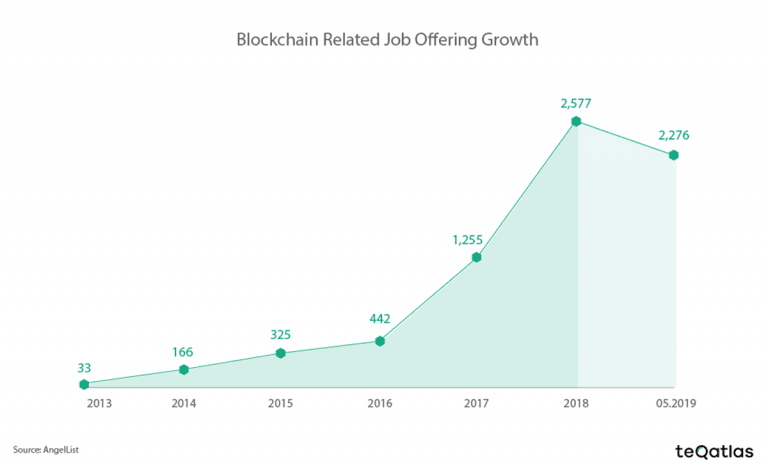 While the cryptocurrency total market capitalization, according to CoinMarketCap, hit $382 billion this June, Gartner predicts the global business value-add of Blockchain to reach $176 billion by 2025. The market forecast further predicts an astronomical rise in the industry value, amassing a cool $2.8 trillion in the years leading up to 2030.

Blockchain can no longer be considered a novelty; some of the world’s biggest organizations are already vying for skilled employees and a greater market share. Microsoft and Accenture are increasing their Blockchain infrastructure and multibillion-dollar corporations like IBM rank high in the list for the top Blockchain employers.

Venture capitalists are also aboard the Blockchain bandwagon, pumping record amounts of investment into the industry. 2018 was the biggest year for Blockchain, amassing $5.1 billion worth of conventional investment in 2018.

2019 promises to be another year of sustained growth, with only conventional investment figures hitting the $327 million during the first quarter only. Promising, right?

So, is Blockchain actually growing? What do industry insights suggest? What is the investment potential, particularly after the coin-price craze that ensued in 2018?

As industries and economies continue to align their focus and processes with Blockchain technology, there has been a stunning rise in the number of employment opportunities related to Blockchain development.

In the six years from the start of 2013 to 2018, job offerings in the Blockchain arena rose by an astounding 139%! That goes to show how much the Blockchain landscape has transformed over the years.

Popular job listing websites, such as Angel.co, have experienced a dramatic rise in the number of job listings. In fact, job listings related to Blockchain in the first five months of 2019 totaled to approximately the same amount as job listings in the whole of 2018.

With the rising number of jobs in the Blockchain industry, technical and skilled employees, primarily engineers, have witnessed their demand shoot off the roof.

From the lowest disclosed salary of $17k, the salary range shows a steep increase to reach figures of more than $271k.

While salaries across Blockchain jobs differ vastly, data reveals that almost 50% of the 807 jobs fall within the $81k - $144k per annum range. 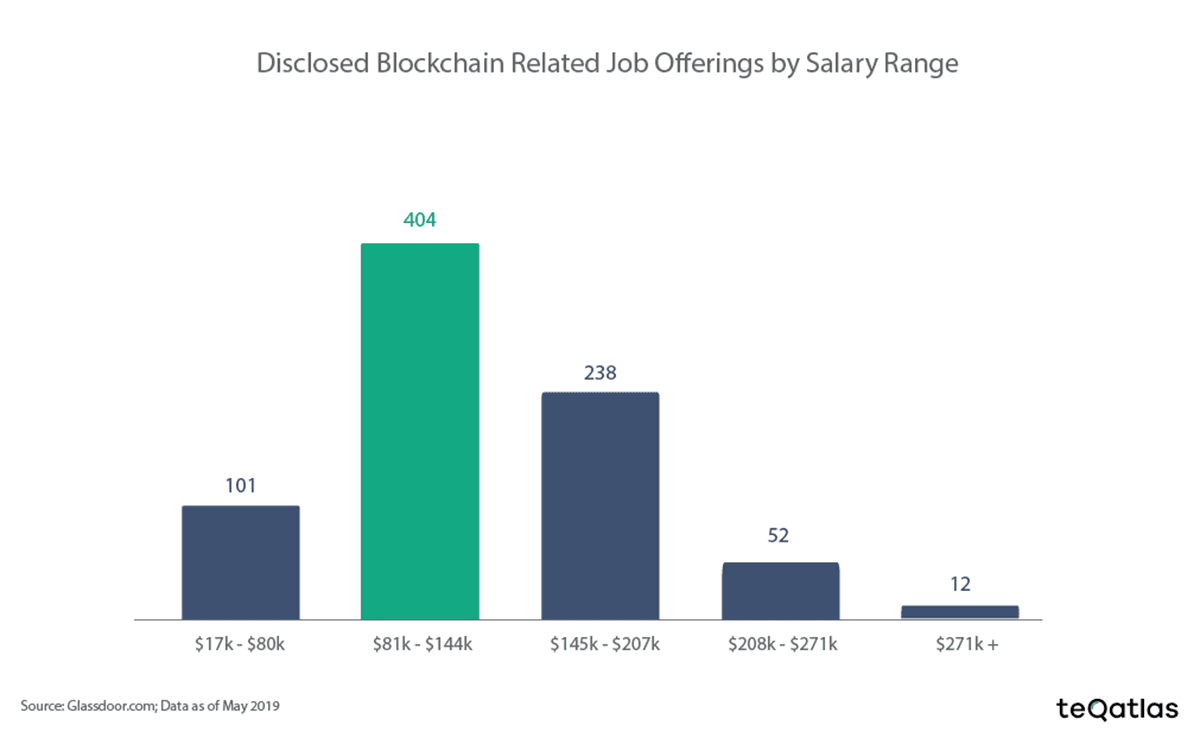 Data from the industry-leading job site, CryptocurrencyJobs.co complements the information from Glassdoor. The US has emerged as the central hub of Blockchain technology, and income statistics further prove the fact.

The average Blockchain job salary in the US is a decent $105k. When pitched against the leading regions of Blockchain technology, the US average steers clear of competition – averaging at almost $10k more than its nearest rival - Asia and $30k more than Europe. However, on average it is more profitable to work remotely than in Europe or Asia.

That’s not all. The US average salary for Q1 2019 was approximately $49k, according to The Balance Careers. When compared to the Blockchain industry average, the divide reflects the advancement Blockchain technology has made. 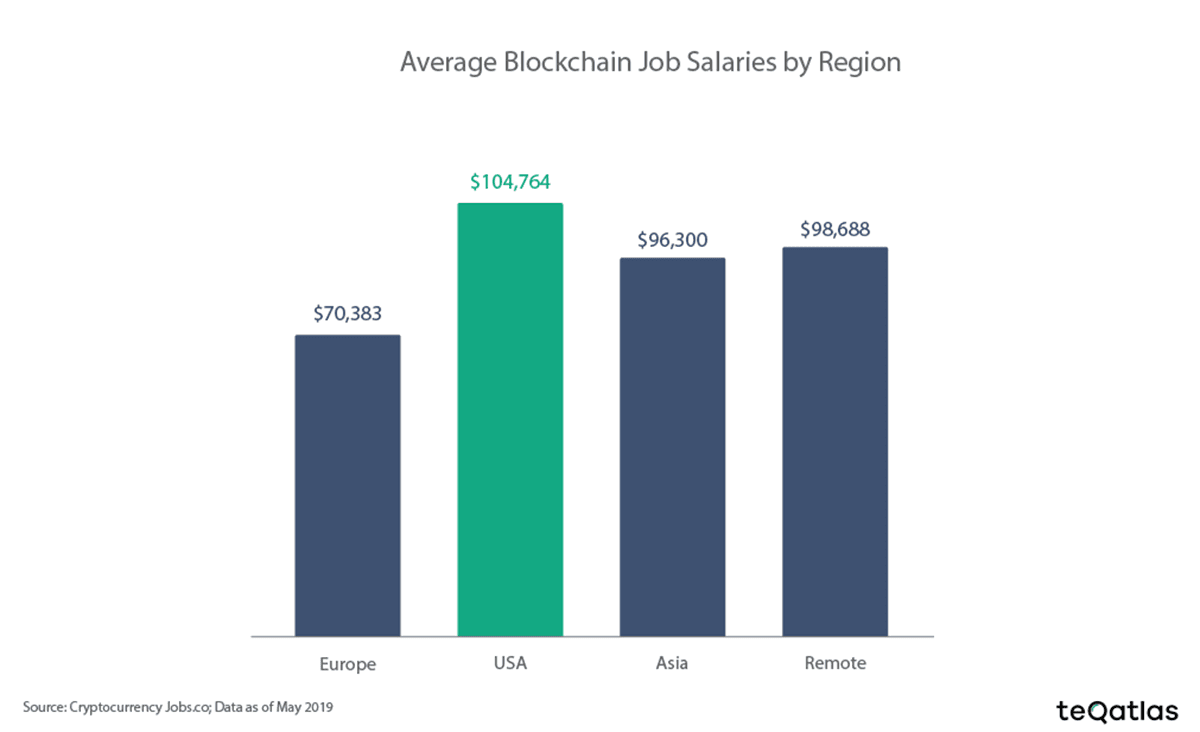 The Blockchain industry is beset by intense competition by some of the leading companies in the world, and they are all vying for the scarce human resources on offer.

Of all of them, IBM leads the pack with almost twice the amount of employment opportunities on offer of the next employer - Oracle. The tech giant is also behind some widely renowned Blockchain initiatives such as Tradelens, IBM Food Trust, and Blockchain World Wire, to name a few. As of July 2019, IBM’s official website showed 394 openings related to the Blockchain industry.

Unsurprisingly, technological entities, including Oracle, SAP, and Amazon constitute the overwhelming majority of the biggest employers in the Blockchain industry.

However, surprisingly, the only 4 non-technological companies among the top 15 employers are the Big 4 accounting firms. This is a telling sign of the growing Blockchain integration in the financial industry. 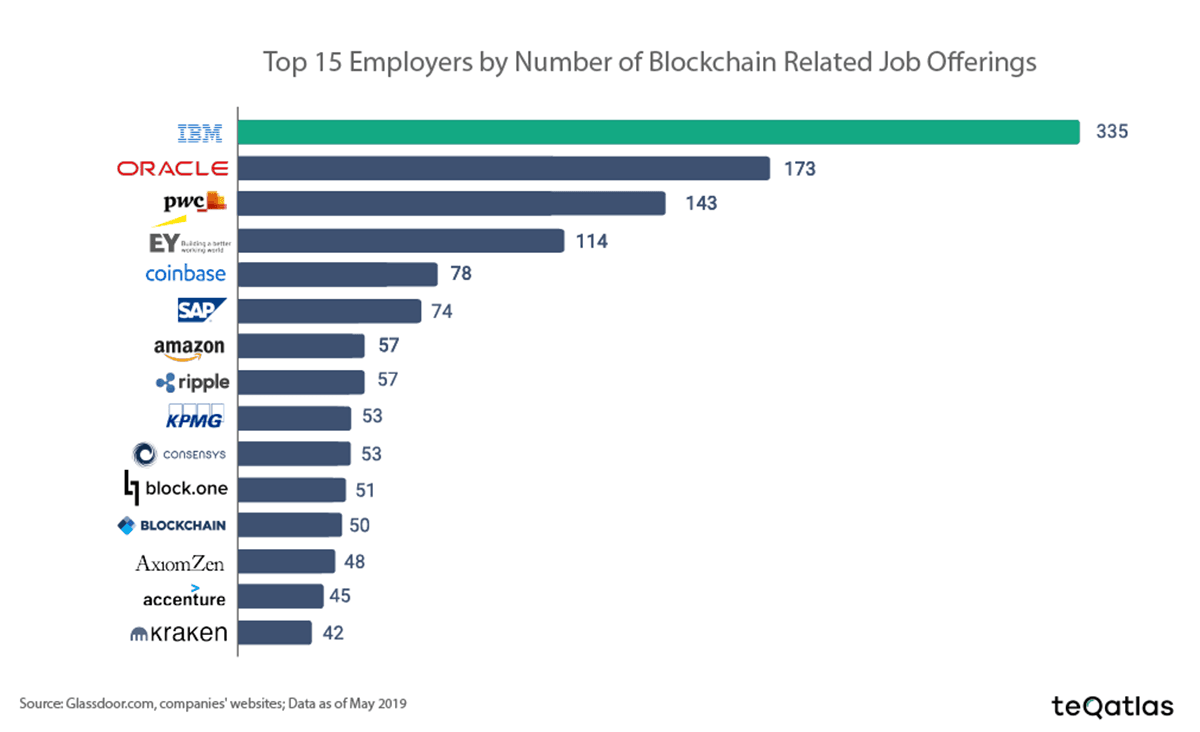 Which City Offers The Most Blockchain Opportunities?

While it is a global phenomenon, developed economies across North America, Europe, and Asia are the ones driving growth in the sector.

This is why the list for countries that offer the most Blockchain related jobs fails to surprise us. The Blockchain capital of Europe, London, grabs the top spot with 26% of the jobs.

Universities That Are Most Likely To Create Blockchain Founders

The US is the hub of the global Blockchain industry, and leading tech and business schools have seen students go on to found their own Blockchain startups.

Of the 18 most highly funded Blockchain startups in history, 50% have their founders and CEOs graduated from an American university. From Harvard to the University of Illinois, all make the list. 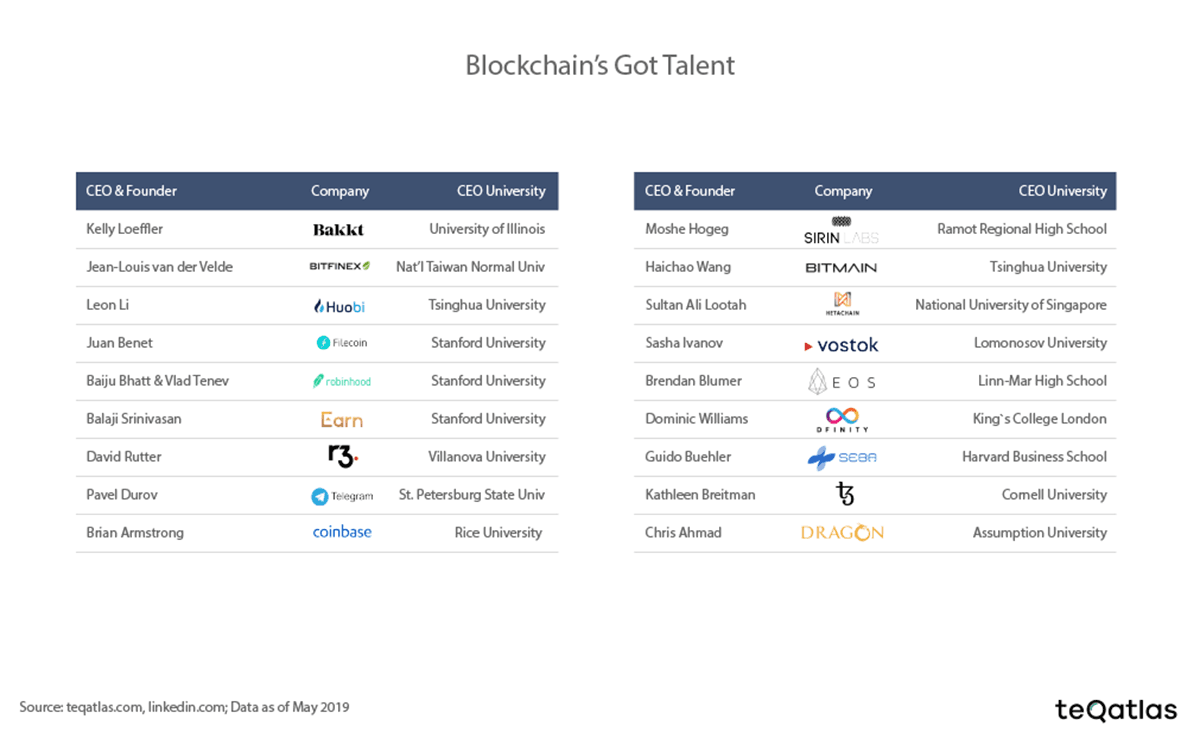 What Are The Most In-Demand Blockchain Positions?

As an entire industry, Blockchain job listings analyses reveal that there is a job for everyone – from marketing managers to product designers.

However, the software engineer is a highly sought after position in the Blockchain arena. Due to the core function of a software engineer, coupled with the increasing number of companies, the demand is set to grow even further.

Of almost 3k job listings that were listed on Glassdoor, 686 were for software engineers. The rest of the top three were filled by front-end engineers and risk analysts, highlighting the industry’s core objective to develop and test Blockchain solutions rigorously. 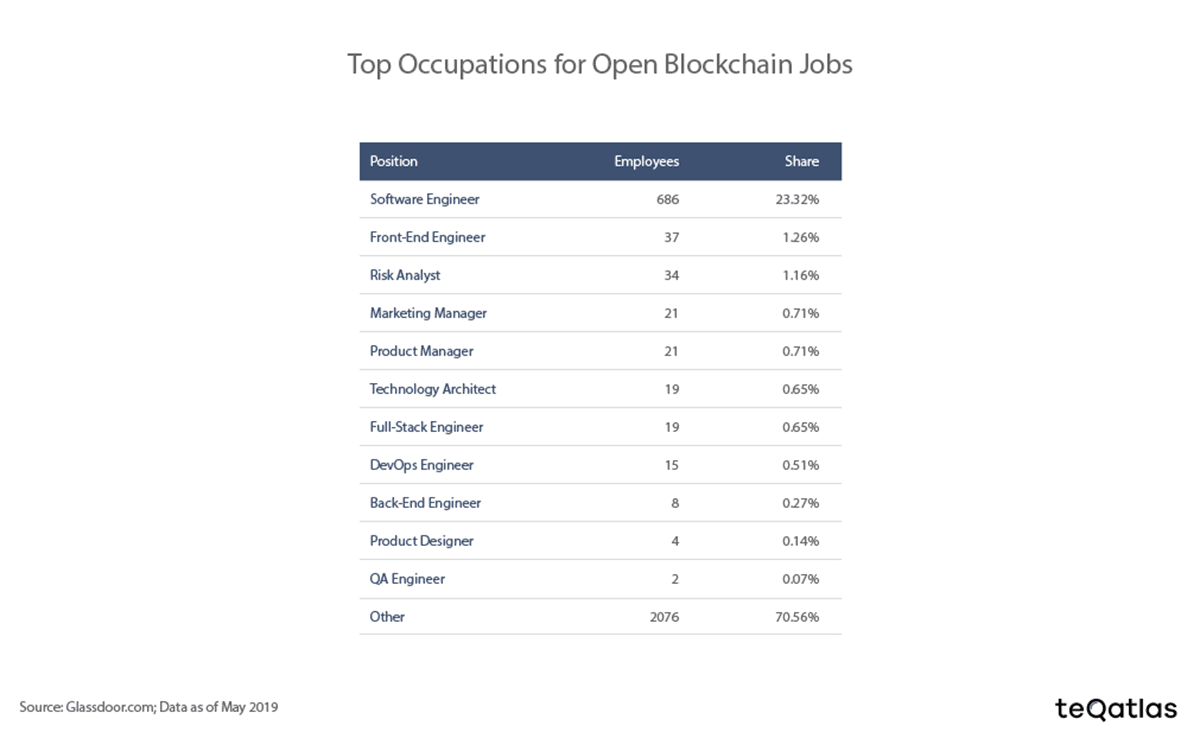 Blockchain and Investments: Where is it all going?

Since the boom of Blockchain, billions upon billions of dollars have flown this way. But where is the money put to use?

The leading number of backed companies and the majority of the invested amounts pertain to the FinTech industry, which is essentially revolutionizing how financial data is recorded and analyzed.

In fact, PwC (one of the ‘Big Four’) revealed that the financial sector triumphs all other sectors when it comes to Blockchain adoption.

However, fueled by high profile purchases, the largest average deal amount per company is the highest in the communication software industry. That is so only due to a few deals, the most recent being the $1.7 billion Telegram TGE deal and the $217 million Kik deal. 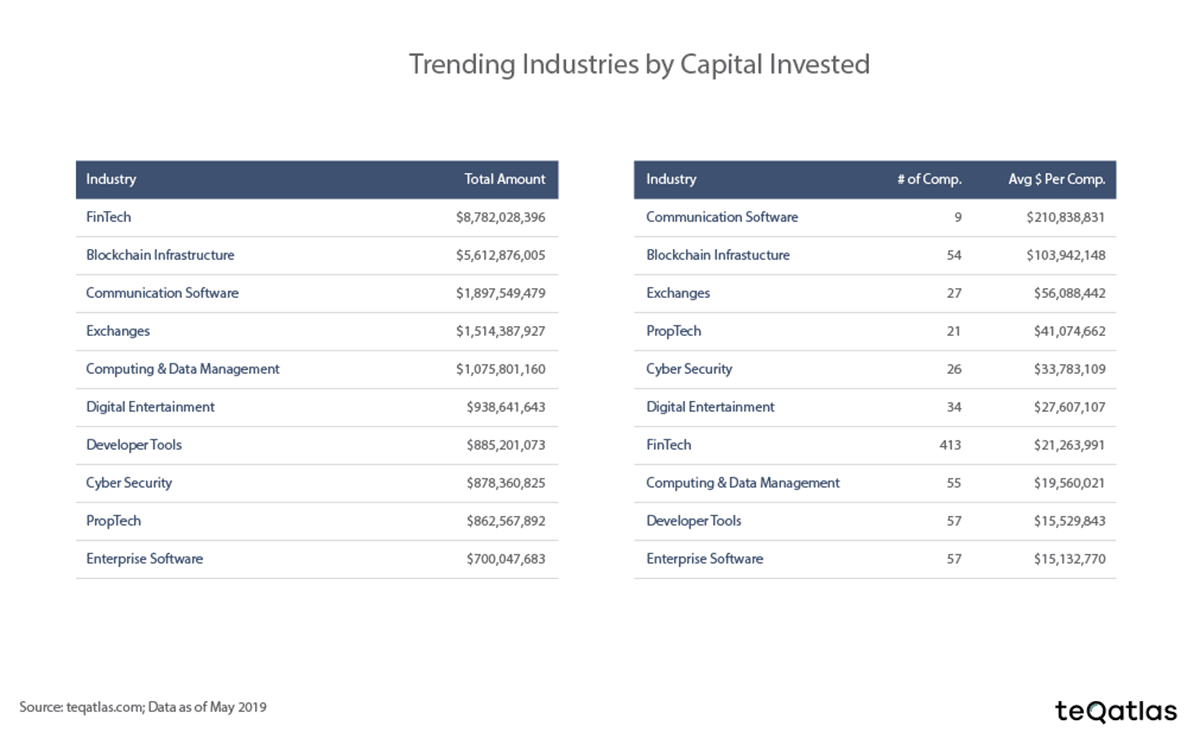 The Most Active Investors In Blockchain

More than 800 Venture Capital investment firms have tried their luck in the Blockchain arena, and the number continues to grow.

Of the 800, Digital Currency Group (DCG) has the highest number of deals. In fact, DCG has more than twice the amount of completed deals than Pantera, which takes the second spot.

It is also worth noting that of the top 10 most active VC firms, 8 ply their trade in the United States – further affirming the dominance the US holds in the Blockchain arena. 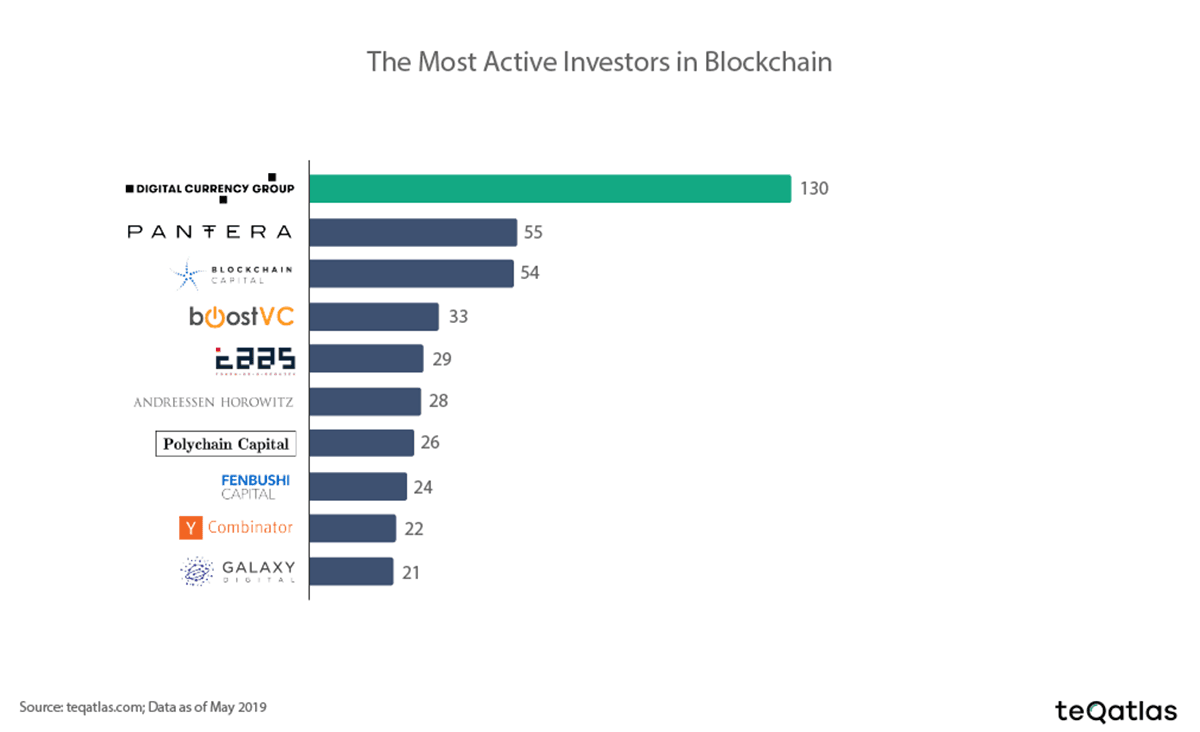 Almost the entirety of the biggest investors invested in the Angel/Seed rounds. Of the two exceptions, only Galaxy Digital is active with TaaS being closed. 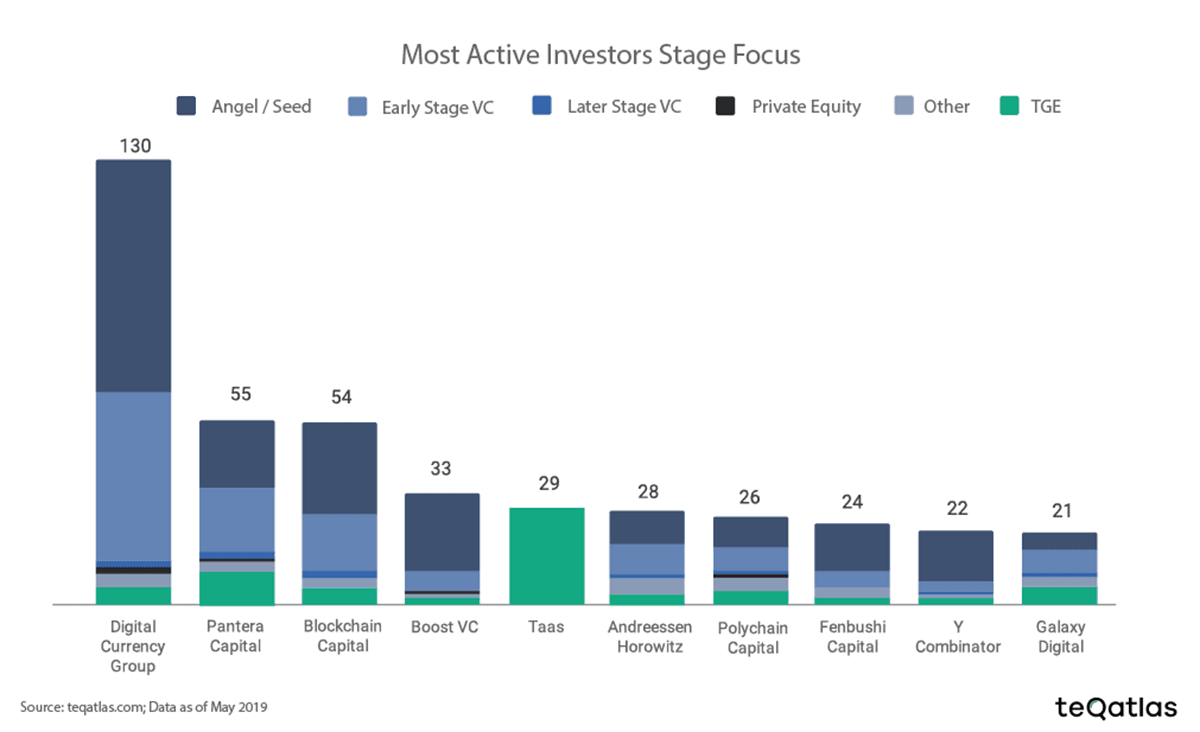 Where Are Blockchain Investors Actually Investing?

Linking up with the information provided above, the majority of the deals occur in the FinTech arena. The overwhelming flow of capital towards the FinTech arena also perfectly aligns with the popularity of backed capital.

This is another sign that FinTech investors see real potential in the startups they are investing in, and this means much more than a side investment that diversifies the portfolio – this is a serious business that is expected to pay returns. 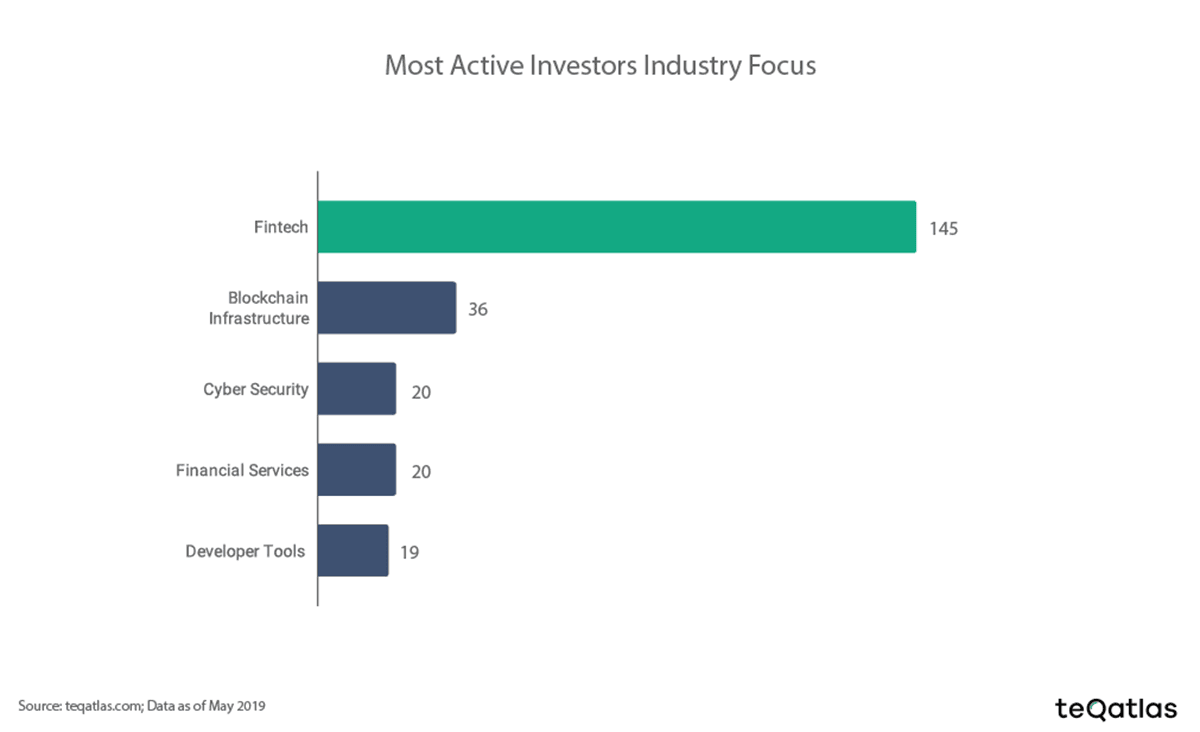 Some of the largest banks in the world are also attracted to Blockchain technology and the endless possibilities it can give rise to.

The world’s leading banks have all invested in R3, a US-based firm that leads a consortium of about 300 firms that build and use Blockchain technology.

Corda Enterprise, an R3 project, was the centerpiece of the investment process and crucial to highlight the company’s potential for banks. 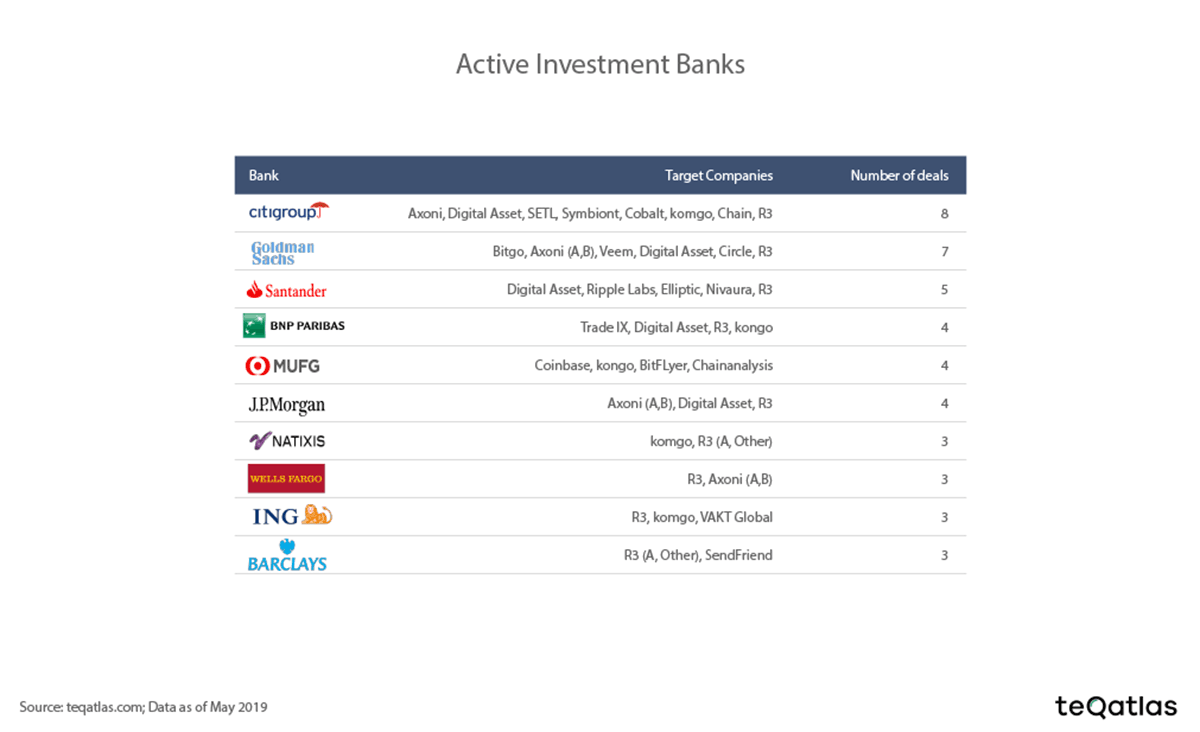 Blockchain Startups Are Still On The Rise

Blockchain has been around for some time, but the rapid increase in both, its popularity and adoption has spiraled a new wave of startups that are hoping to make it big.

2017 was massive in that respect, with more than 600 startups emerging on the scene – making the market highly competitive.

Although the latest data from 2018 shows a slight decrease in the accelerated rate of startups, it still averages around 300 new startups per year – a trend which shows no signs of slowing down in 2019. 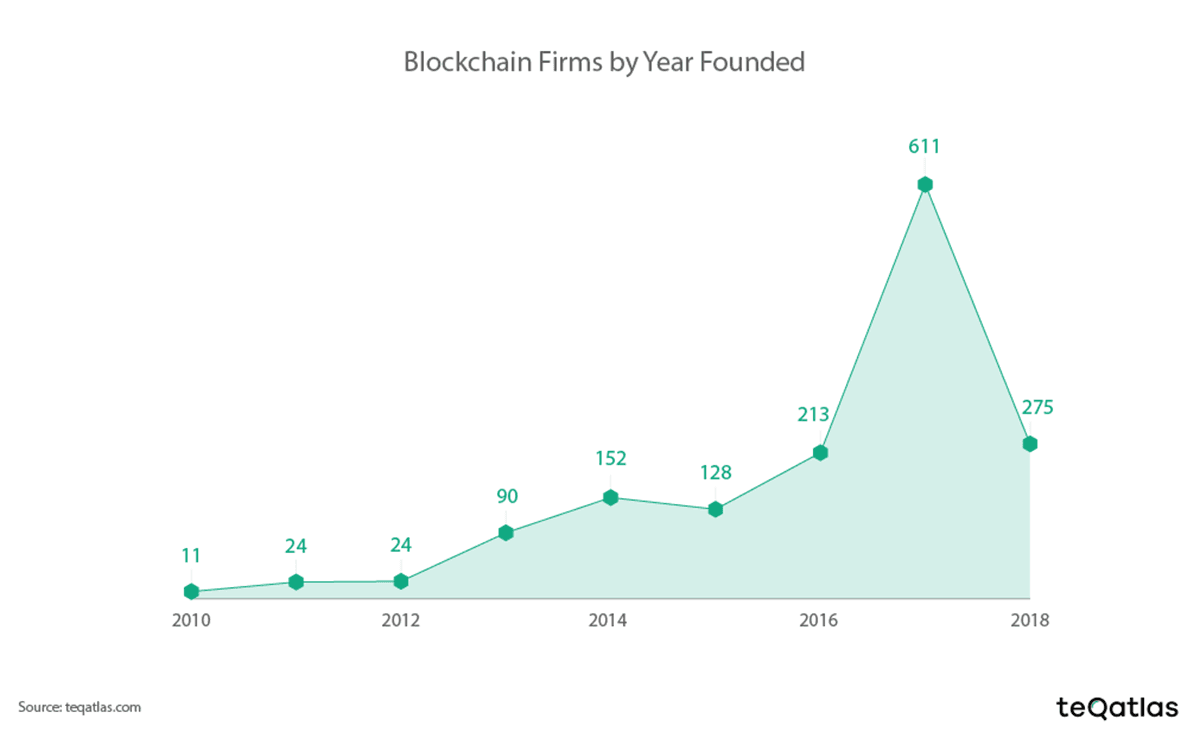 The Blockchain industry is still in its adolescence, despite garnering much hype and attracting major investment.

Analysis into the Blockchain market reaffirms what’s known – that the United States is leading in terms of Blockchain-related investments, talents, and research.

As Europe continues to emerge as another Blockchain region, the jobs offered in the region will have to match the salaries offered elsewhere, particularly in America.

Another interesting insight is investor’s belief in the FinTech arena, and how it derives the highest investment, with all Big 4 firms involved hands on.

As Blockchain continues to globalize, the future will see many new leaders emerge from other parts of the world. The market is only going to get more competitive, and the products will have to be more convincing in order to attract investors who will have plenty of options by then.

Read the full Blockchain’s Got Talent Research by TeqAtlas here.

TeqAtlas is the Market Intelligence Provider that drives and eases scouting of emerging technologies for SMEs. Our goal is to encourage tech professionals all over the world to adopt modern solutions and wide-spread digitalization.

TeqAtlas Analytics & Research provides a knowledge base for tech pioneers.

Products & Services database helps find vendors for any job. Investment Opportunities provides the data you need preparing for the next funding round, benchmarking your company against competitors and looking for the lead investor.