If you have an aging senior as a parent and have tried to find an open living unit at a nearby Retirement Facility, this article is all about you and where to invest your nest egg. Investing $10,000.00 across these five stocks will produce a retirement account worth millions of dollars by 2035.

Half of the 4,815 retirement facilities existing in America are single facility, sometimes private homes and sometimes they are large complexes.  The other half of open unit availability (or extreme lack thereof) are multiple-facility complexes that are well diversified on geographical locations across the United States, with stock ownership availability. The most common type of senior housing is in an independent retirement community, and generally is an apartment unit, secured through monthly rent payments.  An independent retirement community is a community for active, healthy seniors who are able to live on their own.

Most retirement facilities have a minimum of twenty-five people on the waiting list to be admitted.  It generally takes eight months of waiting to secure a preferred living unit.  There simply is not enough supply of retirement facility living units to satisfy the demand of retiring seniors.

America cannot build complexes fast enough for the 78 million units required by 2035 nor 100 million units required by 2060. By 2030, as the last Baby Boomers turn 65, older adults are expected to reach 20 percent of the population.   By 2050, the 85+ age group will reach 19 million or 24% of older adults and 5% of the total American population.  Investing in the companies above that are trying to accomplish housing units for America’s aging population is going to be on the ground floor of the fastest value producing stock ownership trajectory since Amazon, Google, or any other company coattails to have been ridden in the history of the stock market.

One cannot build an Independent Living facility without vast amounts of leverage, the borrowing of money from others, to make money in senior facilities ownership and management.  The gross profit margin on Independent Living management is 40%.   To make millions of dollars for investors, takes billions of borrowed dollars from financial institutions, and ten to twelve months of building the complexes.  Financial leverage is large, but not as big a problem as time.  Without massive spending upon millions of living units now, in a year from now there won’t be more than 400,000 living units available.  There are just 15 years until 78 million units are required.  That means that 5.2 million living units are required to be built every year from 2019 through 2034 so that in 2035 78 million residents can find desirable independence in living.  Thirteen times the building to date must be maintained in pace from today through 2034 to achieve the goal.  While trillions of dollars of leverage is required, the benefit is 40% margins, meaning billions of dollars to the investors as the spoils for their investments.  Independent living facilities are generally large facilities, typically twenty acres of high-rises, equating to 1,200 residents living in 800 square foot living units and sharing common areas of expansive game rooms, meeting areas, pools and other entertainment facilities.  Two million square feet of building at $100.00 per square foot cost to build means $200 million of borrowing per complex.  4,500 complexes at $200 million means $900 billion of borrowing every year for fifteen years is $13.5 trillion dollars of investment required.  Once completed, they will generate 40% gross profits every year, $5.4 trillion in profits.  And those profits will be generated for a minimum of twenty-five years.

As of 2015, the CDC reports the average life expectancy of an American is 78.8 years old.  But those who achieve 80 years of age tend to live for another ten years.  More than 50,000 Americans are over 100 years old today, mostly women.  A majority of seniors stay sexually active and more than 20% continue working beyond the official retirement age, more so they like working rather than poor savers for retirement.  About 37% of men ages 65-69 and 16% of men 70 and over still participate in the labor force. By comparison, 45% of women ages 62-64 and 28% of women aged 65-69 participate in the labor force.  Only 3% of seniors are in or require nursing home care, in-home care support is the majority of services consumed. About 1.8 million seniors over 65 live in nursing homes, while five million seniors receive care from a home health care agency. 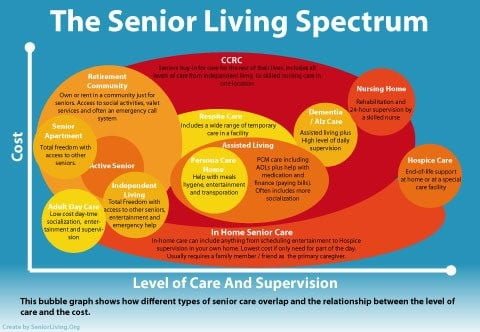 Generally $1,500 to $3,500 is considered reasonable monthly rent for a one-bedroom apartment in an independent retirement community. Low-income seniors may receive Section 8 rent subsidies. Section 8 housing vouchers are accepted by select senior apartment communities.  The current voucher maximum is $2,000 per month to ensure seniors do not spend more than 30% of their income resources on rent.  $2,500 average revenue per unit times 1,200 average units per complex is $36 million in annual revenue upon $200 million of borrowed money over twenty-five years is $900 million of which 40% profit is $360 million of profit. Subtract the debt servicing cost of $200 million at a nominal cost of 12% or annual cost of $600 per independent living unit per month or $200 million over twenty-five years’ time leaves $160 million of net profit. Each unit therefore produces $5,000.00 of net profit over the twenty-five years. 100 million units times $5,000.00 net profit per unit means $500 billion of profit to be shared by the investors over the 25 years from 2035 to 2060.