OnePlus has been waging war against premium smartphones since its inception. The Chinese vendor’s latest flagship OnePlus 7 Pro is more expensive than what consumers expected, but it still costs less than the ‘affordable’ premium phones sold by vendors like Samsung and Apple. Earlier this year, Samsung launched the Galaxy S10E as a budget-friendly option for people who can’t afford the more expensive Galaxy S10 and S10 Plus. The S10E lacks some of the luxury features of its expensive siblings. Let’s take a look at the OnePlus 7 Pro vs Galaxy S10E comparison to help you decide which one is a better buy.

Both devices offer a glass sandwich design where the front and rear glass panels are supported by a metal frame in the middle. They both have a nearly bezel-less and notch-less front panel. Samsung has achieved it by using a hole-punch display to accommodate the selfie camera in the top-right corner of the screen. In contrast, OnePlus has used a pop-up selfie camera mechanism similar to what we have seen on Oppo and Vivo devices.

The OnePlus 7 Pro is available in Nebula Blue, Mirror Gray, and Almond colors. Samsung has launched the S10E in Prism White, Prism Black, Prism Blue, and Flamingo Pink colors. The rear panel of both handsets is protected by Corning’s Gorilla Glass 5.

The Galaxy S10E offers the 3.5mm headphone jack and an IP68 rating for water-resistance, meaning it can remain submerged in up to 1.5 meters deep water for up to 30 minutes. The OnePlus 7 Pro lacks both these features, though it does offer splash resistance.

Both handsets have a gorgeous OLED screen that delivers vibrant colors. The OnePlus 7 Pro features a 6.67-inch Fluid AMOLED display with a resolution of 3120 x 1440 pixels. It has 19.5:9 aspect ratio and 516ppi of pixel density. It also offers a 90Hz refresh rate, which makes for a faster and smoother gaming experience. But there isn’t a lot of 90Hz content to take advantage of the feature.

By comparison, the Galaxy S10E has a more traditional 60Hz refresh rate. Both devices are HDR10+ compliant. The S10E gets a 5.8-inch AMOLED display with Full HD+ resolution of 1080 x 2280 pixels. It has a 19:9 aspect ratio and a relatively lower 438ppi of pixel density. It has a hole in the top right corner of the screen to house the selfie camera.

The two phones have similar hardware specifications. They both run Qualcomm’s Snapdragon 855 chipset, which is built using the 7nm process. The chipset is paired with Adreno 640 GPU. Outside China and the US, Samsung sells the S10E with its own Exynos 9820 processor and Mali-G76 graphics processor. Both processors are beasts when it comes to real-life performance.

The OnePlus 7 Pro comes in three different RAM and storage options: 6GB+128GB, 8GB+256GB, and 12GB+256GB. It’s the first phone to use the latest UFS 3.0 storage technology, which is much faster than the UFS 2.1 technology in the S10E. However, it lacks the microSD card slot for external memory.

The base model of Galaxy S10E features 6GB RAM and 128GB storage. If you want more storage, you can go for the 8GB RAM variant with 256GB storage. The device has a microSD card slot that supports external memory of up to 512GB to ensure that you never run out of storage.

The OnePlus 7 Pro is backed by a giant 4,000mAh battery, which is enough to get you through a full day of normal usage. Its larger display, higher resolution, pop-up selfie mechanism, and 90Hz refresh rate consume a lot of power. Thankfully, the device comes with OnePlus’s proprietary Warp Charge 30 charging technology, which delivers 50% charge in just 20 minutes via a USB-C port.

The OnePlus 7 Pro lacks wireless charging and Wireless PowerShare technologies, both of which are offered on the S10E. The Wireless PowerShare feature allows you to charge your accessories and other compatible devices by putting them on the back of S10E.

The S10E packs a 3,100mAh battery with 15W fast charging. It has a smaller 5.8-inch display, so the battery should easily last a full day of normal usage.

Both devices run the latest Android 9 Pie software, but with a different skin. The OnePlus 7 Pro has OxygenOS 9.5 software. Its user experience is similar to the stock Android. You can get started right away without wasting time learning the interface. It also has features like Smart Boost and Gaming Mode to deliver better performance while preserving the battery life. The OxygenOS also brings background optimization to keep the phones running fast even when they get older.

The S10E runs Samsung’s new One UI skin, which makes interactions more intuitive as smartphone screens continue to get bigger. It displays navigation options near the bottom of the display to ensure they are within your thumb’s reach, while the content is displayed in the top half of the screen.

The Galaxy S10E has a side-mounted fingerprint sensor, which is reliable, fast, and secure. Samsung has embedded the capacitive fingerprint reader in the power button, making it easier for you to unlock the device.

OnePlus has significantly upped the game in photography department with its latest flagship. The OnePlus 7 Pro sports a 48MP primary lens with f/1.6 aperture, a 16MP ultra-wide angle lens with f/2.2 aperture and 117-degree field of view; and an 8MP telephoto lens with 3x optical zoom and OIS. The phone is capable of recording 4K videos at 60fps.

For selfies, the OnePlus 7 Pro has a 16MP lens with an f/2.0 aperture housed in a pop-up mechanism. It uses AI smarts to take excellent photos in both bright light and low-light conditions.

The Galaxy S10E has a dual camera setup on the back. It consists of a 12MP wide-angle lens with variable apertures of f/1.5 and f/2.4; and a 16MP ultra-wide angle lens with f/2.2 aperture and a 123-degree field of view. The wide-angle lens automatically switches between the two apertures depending on lighting conditions to take the best possible shot.

The OnePlus 7 Pro matches or beats the Galaxy S10E in almost every aspect. Of course, it lacks some features like wireless charging, Wireless PowerShare, water resistance, and expandable storage. But it brings you a faster 90Hz refresh rate, a larger display, and a triple camera setup – all at a lower price than S10E. 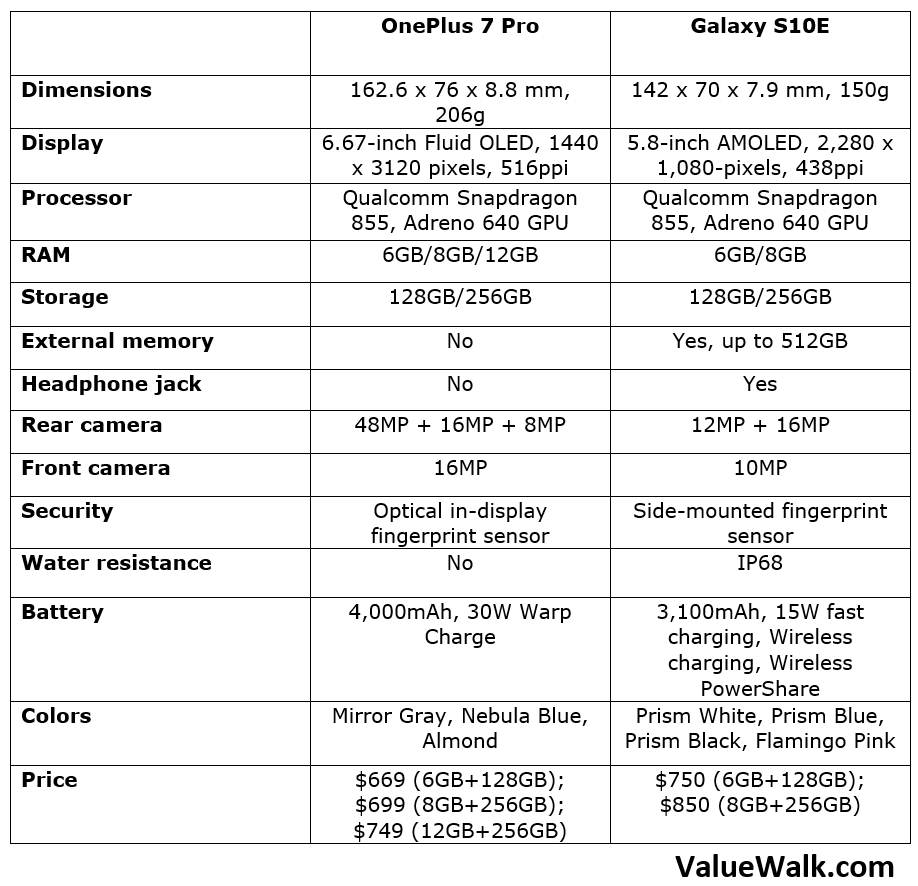