The mid-range Nokia 7.1 has been around for quite a while, and there is no denying that it’s an excellent phone for the price point. But now there is a new kid on the block in the form of Google Pixel 3a, which is receiving a lot of praise. Both devices cost between $300 and $400 and are jam-packed with cool features. Here is the detailed Nokia 7.1 vs Google Pixel 3a specs and price comparison to help you decide which one is a better buy.

The Nokia 7.1 has a glass back and front supported by an aluminum frame. It has a vertically-aligned dual camera setup and a fingerprint sensor on the back. It feels like a premium phone rather than a mid-range handset. On the front panel, it has a chin at the bottom and a notch at the top to accommodate the selfie camera and ear speaker.

The Nokia 7.1 measures 149.7 x 71.2 x 8 mm and weighs 160g. It comes in Gloss Midnight Blue and Gloss Steel color options. It lacks any kind of IP rating for water- or dust-resistance.

Google has used a polycarbonate body on the Pixel 3a to reduce the cost. But its rear panel has the same two-tone finish as the premium Pixel 3. It has a single camera lens and a fingerprint reader on the back. On the front panel, it has thick bezels at the top and bottom of the screen, which means there is no notch. It has a front-facing speaker and bottom-firing stereo speaker.

Both handsets retain the 3.5mm audio jack and use USB-C port for charging. The Pixel 3a lacks an IP rating for water resistance, but it offers splash and dust resistance. Google has launched it in Just Black, Clearly White, and Purplish color options.

The Pixel 3a measures 151.3 x 70.1 x 8.2mm and weighs 147g. It gets Google’s Active Edge feature that allows users to activate Google Assistant by squeezing the phone.

The Nokia 7.1 sports a 5.84-inch Full HD+ display with a 19:9 aspect ratio. It has a resolution of 2280 x 1080 pixels with 432ppi of pixel density. HMD Global has used what it calls PureDisplay IPS LCD screen, which automatically adjusts the contrast and brightness depending on ambient lighting conditions. It also offers HDR10 support, which means you’ll experience stronger contrast and wider color gamut when watching videos.

The Pixel 3a lacks HDR10 support. It sports a 5.6-inch gOLED display with Full HD+ resolution of 1080 x 2280 pixels and an 18.5:9 aspect ratio. Thanks to its OLED technology, the Pixel 3a offers more vibrant colors and truer blacks than Nokia 7.1.

The Nokia 7.1 screen is protected by Corning’s Gorilla Glass 3. Google has settled with Asahi’s Dragon Trail Glass instead of Gorilla Glass to bring down the cost of the phone. The Pixel 3a has a 75.0% screen-to-body ratio while it’s 79.9% for Nokia 7.1.

Nokia 7.1 vs Google Pixel 3a specs

The Nokia 7.1 runs Qualcomm’s Snapdragon 636 processor paired with Adreno 509 graphics processor. The chipset and GPU are powerful enough to handle day-to-day tasks, but can’t offer a smooth experience if you play demanding games. The device packs 4GB RAM and 64GB of internal storage. In some countries such as India, HMD Global also sells a 3GB RAM variant with 32GB storage.

The Nokia 7.1 supports up to 400GB of external storage via a microSD card slot. It packs a 3060mAh battery with 18W fast charging. HMD Global claims the fast charger delivers up to 50% charge in just 30 minutes. It doesn’t support wireless charging.

Talking about the Pixel 3a specs, it runs a more powerful Qualcomm Snapdragon 670 chipset with Adreno 615 GPU. It comes with 4GB RAM and 64GB of storage. There is no microSD card slot for external memory. Google offers unlimited free cloud storage of photos and videos via Google Photos in high quality, but not in their original resolution.

Google has added a Titan M chip for security. The Pixel 3a supports AR Core framework for augmented reality apps. The Pixel 3a specs are powerful enough to deliver super smooth performance, thanks to Google’s software optimization. It features a 3,000mAh battery with 18W fast charging. The fast charging technology offers 7 hours of battery life in just 15 minutes of charging. It doesn’t support wireless charging.

Both Nokia 7.1 and Google Pixel 3a run Android 9 Pie. The Nokia 7.1 was released with Android 8.1 Oreo out of the box, but it has already received the Android 9 Pie update. It is part of Google’s Android One program, which means it runs the stock version of Android with no bloatware. It will get at least two years of Android software updates and three years of security patches.

The Pixel 3a runs the stock version of Android 9 Pie with no bloatware. Google promises at least three years of security patches and software updates. The device also features Google’s call screening, which allows the AI assistant to answer calls for you to see if the call is a spam or not.

Pixel 3a users also get the Now Playing feature that shows what music is playing in your vicinity. With Pixel 3a, Google is also offering three months of free YouTube Music Premium subscription.

The Nokia 7.1 has a dual camera on the back and a single lens on the front for selfies. HMD has used Carl Zeiss lenses on the device. On the back, it has a 12MP primary sensor with f/1.8 aperture and Dual Pixel phase detection autofocus, and a second 5MP depth sensor with f/2.4 aperture for portrait images. It has a dual-LED dual-tone flash. On the front, it sports a single 8MP lens with f/2.0 aperture.

The Nokia 7.1 takes excellent images in bright light conditions, but struggles in low lighting. The Google Pixel 3a sports the same camera setup as the more expensive Pixel 3. It features a 12.2MP lens on the back with f/1.8 aperture, EIS, OIS, and 76-degree field of view. Google has used Sony’s IMX363 sensor. It is capable of recording 120fps videos at 1080p and 30fps videos at 4K. On the front, it has an 8-megapixel selfie camera with f/2.0 aperture.

The Nokia 7.1 has been priced at $350 for the 4GB RAM variant with 64GB internal storage. But you can get it for as low as $300 at retailers like Best Buy. It’s worth pointing out that the Nokia 7.1 doesn’t work with Sprint or Verizon. You should be using T-Mobile or AT&T if you purchase it.

The Google Pixel 3a costs $399 for the 4GB RAM version with 64GB storage. You can buy it directly from Google Store or at online retailers. It will also be available in US Cellular, Verizon, Sprint, and T-Mobile stores. Unlike the more expensive Pixel 3 and Pixel 3 XL, it won’t be exclusive to Verizon.

The Google Pixel 3a is more expensive than Nokia 7.1. But the additional $50 gets you a faster processor, a better display, and a much better camera. The Nokia 7.1 is cheaper, has a more premium design, and offers HDR10 support. 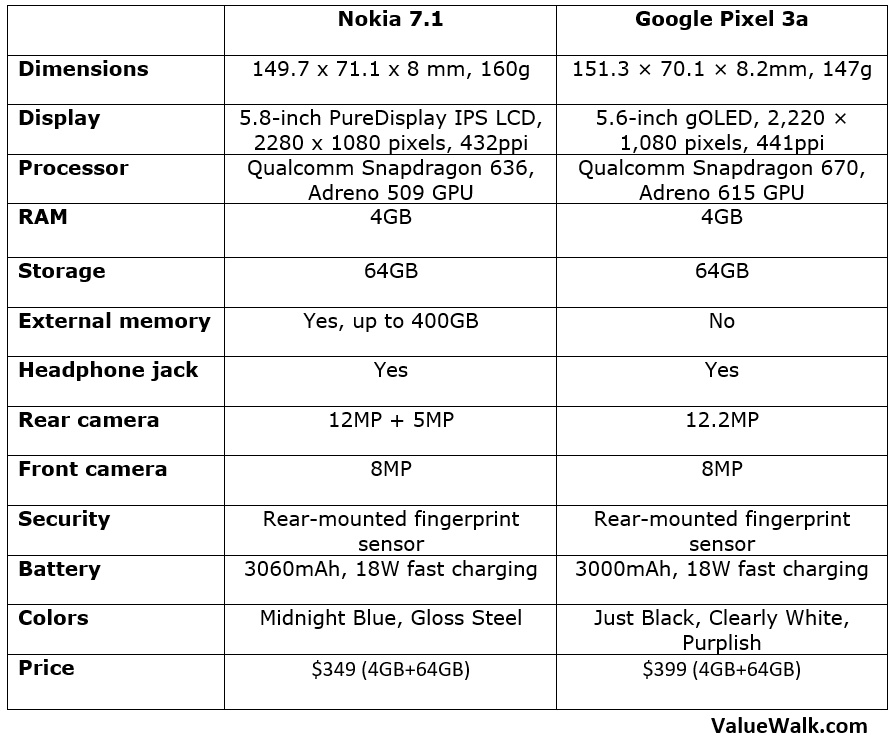