After a plethora of leaks and rumors, Lenovo-owned Motorola has officially announced its Moto Z4 smartphone. The Moto Z3 successor is a mid-range phone like Google’s recently launched Pixel 3a XL. The two devices have similar price tags and processing power. If you are in the market for a new Android phone under $500, you might be wondering whether to go for the Moto Z4 or the Pixel 3a XL. This Pixel 3a XL vs Moto Z4 specs comparison could help you decide which one is a better buy.

The Pixel 3a XL has a dated and boring design. It has thick bezels at the top and bottom of the screen. The rear panel retains a dual-tone finish similar to the Pixel 3 XL. Its back panel is made out of plastic, and houses the fingerprint sensor and a single camera lens. It offers a 3.5mm headphone jack and bottom-firing speakers.

Google has launched the Pixel 3a XL in Clearly White, Just Black, and Purplish colors. The device measures 160.1 x 76.1 x 8.2mm and weighs 167g. It lacks an IP rating for water resistance.

We had seen the leaked design of Moto Z4 even before its launch. The new Motorola handset measures 158 × 75 × 7.35 mm and weighs 165g. It means the Z4 is smaller, slimmer, and lighter than the Pixel 3a XL. Unlike Google’s mid-range handset, it has a nearly bezel-less design with a waterdrop notch at the top to house the selfie camera.

The Z4’s rear panel is made out of glass. On the back, it has the signature Moto camera module. The device also has pogo pins at the bottom to let users connect Moto Mods. It sports an optical in-display fingerprint sensor for authentication and security. It also offers the 3.5mm audio jack.

The Moto Z4 doesn’t have an IP rating for water resistance, but it comes with a P2i coating to make it splash resistant. The device comes in Frost White and Flash Grey colors. All the existing Moto Mods are compatible with the Z4.

Both handsets feature OLED screens, offering better contract and vibrant colors. The Pixel 3a XL sports a 6-inch gOLED display with Full HD+ resolution of 1080 x 2160 pixels. It has an 18:9 aspect ratio, 402ppi of pixel density, and HDR10 support. Google has used Dragon Trail Glass for protection. Thanks to thick bezels at the top and bottom of the screen, it has a 76.3% screen-to-body ratio.

Despite having a smaller form factor, the Moto Z4 packs a bigger 6.39-inch OLED display with Full HD+ resolution of 1080 x 2340 pixels. It has a similar 403ppi of pixel density and a wider 19:9 aspect ratio. It has a display notch at the top for the selfie camera. The screen is protected by Corning’s Gorilla Glass 3.

The Google Pixel 3a XL is powered by Qualcomm’s Snapdragon 670 chipset with Adreno 615 graphics processor. It’s powerful enough to handle day-to-day tasks. It packs 4GB RAM and 64GB of internal storage. There is no microSD card slot for external memory. Fortunately for users, Google offers unlimited free cloud storage of photos and videos via Google Photos.

The Pixel 3a XL features the Titan M security chip and the AR Core framework for augmented reality. It also supports the Active Edge technology to let users activate Google Assistant by squeezing the phone.

The Moto Z4 is slightly more powerful, running Qualcomm’s Snapdragon 675 processor. Google makes up for the slower processor by tightly integrating the hardware and software on Pixel 3a XL. The Z4 packs 4GB RAM and 128GB of internal storage. It also has a microSD card slot with support for up to 512GB of external storage.

Both handsets support the latest Bluetooth v5.0 and USB-C port. Also, they both allow you to make payments via Google Pay.

In terms of battery, the Pixel 3a XL features a 3,700mAh battery with 18W fast charging. Google claims the fast charger offers up to 7 hours of battery life in 15 minutes of charging. The mid-range Pixel lacks wireless charging.

The Moto Z4 gets a 3,600mAh battery with 15W TurboPower fast charging support. Its larger screen is going to consume some extra power. Motorola offers Moto Mods, allowing you to buy a 3,490mAh battery for an additional $80 and attach it to your phone. Motorola claims the device offers up to two days of battery life.

The Pixel 3a XL runs Google’s stock Android 9 Pie software. It will be among the first phones to get the Android Q update later this year. Google has promised three years of software updates and security patches on the device. It gets a call screening feature that handles spam calls and telemarketers for you.

The Moto Z4 also runs the Android 9 Pie with some Motorola-specific features such as Moto Actions and Moto Display. Motorola has told fans that the Z4 would get the Android Q update, but you shouldn’t expect the 2020 Android R update. The company will still offer security patches for at least two years.

The Pixel 3a XL has the same camera setup as the premium Google Pixel 3, which is among the world’s best smartphone cameras. However, it lacks the Pixel Visual Core, which means the image processing is slightly slower than the Pixel 3.

The Pixel 3a XL has a 12.2MP rear camera with f/1.8 aperture, OIS, EIS, and a 76-degree field of view. It captures photos with high dynamic range and excellent color reproduction. The phone has an 8MP selfie camera with f/2.0 aperture. The phone is capable of recording 4K videos at 30fps.

Google has added a lot of AI features on its phone to enhance the photography experience. These features include Night Sight, Top Shot, Portrait Mode, Super Res Zoom, and HDR+.

The Moto Z4 features a single 48-megapixel camera on the back with f/1.7 aperture. Motorola uses pixel binning technology, which combines four pixels into one to improve low-light performance. In low light, the phone takes “higher quality” 12MP images due to pixel binning. On the front, it has a 25MP selfie camera with f/2.0 aperture. The phone has a Night Vision mode to take better images in dark situations. It works similar to Google’s Night Sight mode.

Both smartphones cost $500 or less. The Pixel 3a XL has been priced at $479 in the US. It is available on Sprint, T-Mobile, US Cellular, and Verizon. It also supports the AT&T network. You can also get the device through Best Buy or Google Store. There is a smaller Pixel 3a that costs $400, but has the same specs as Pixel 3a XL except for the screen size.

The Moto Z4 has been priced at $500 in the United States. It is scheduled to go on sale in the US starting June 6th. Verizon customers will be able to buy it from June 13 at just $240 ($10 for 24 months). Verizon customers will also be able to buy a 5G Moto Mod for $200, much lower than its standard price of $350. If you order the unlocked Moto Z4, you will get the Moto 360 Camera mod bundled with the phone.

The Motorola phone has an edge in most aspects, but when it comes to software and camera, Google’s mid-range phone still has the upper hand. 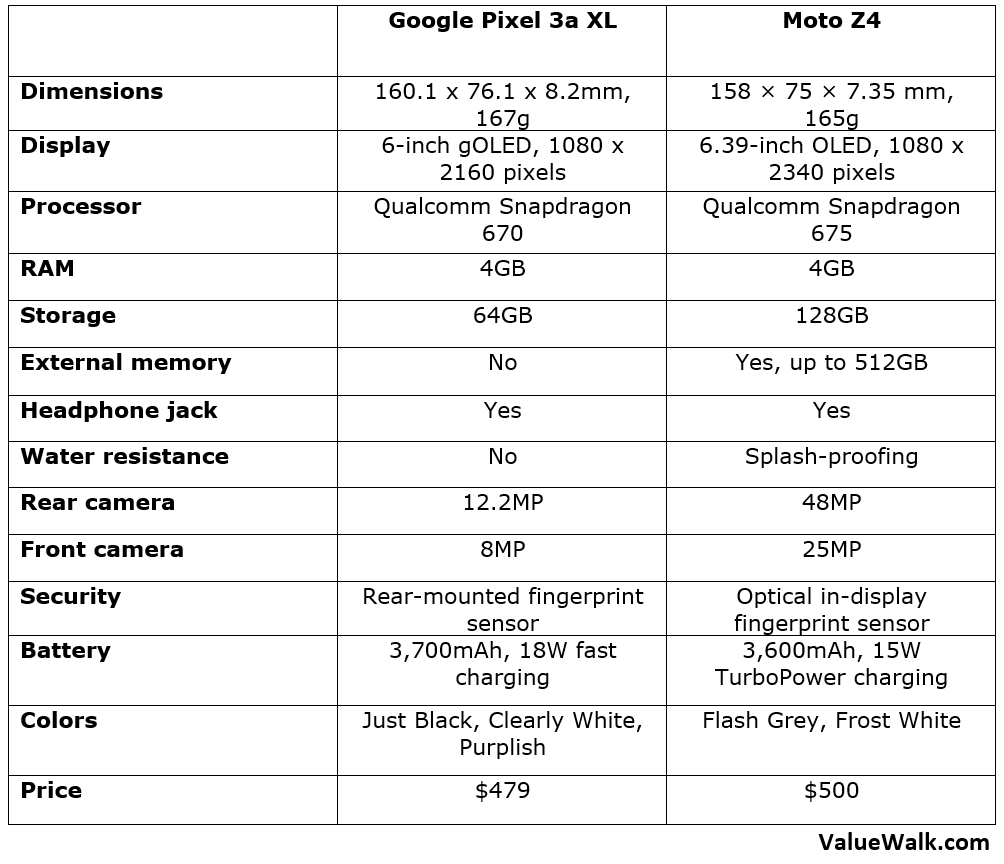