Another month and more record highs for North American stock indices. Throughout the month of April it began to feel as though nothing could take stocks down. Be it the barrage of headlines fuelling optimism towards U.S., China trade talks, U.S. Q1 earnings that were generally not as bad as feared (yes, ’not bad’ is the new good for stocks), and a steady stream of dovish rhetoric from central bankers. These variables combined to propel stocks back to the all-time highs seen last fall.

We’ve elected not to chase this market higher as we believe a lot of good news is now priced into equities. Hence we prefer to maintain lower net exposures featuring targeted long positions, a diversified short book and an options overlay for hedging purposes. This formula has served our investors well to date, and we believe will continue to do so as this cycle matures.

Our funds posted another positive month, with the Forge First Long Short Class F Lead Series returning 1.42% net of fees, boosting the year to date net gain to +5.77%. As of April 30th, the gross and net exposures of our Long Short fund were 115% and 29% respectively. Our lower volatility fund, the Forge First Multi Strategy advanced 0.59% net of fees for the Class F Lead Series, boosting its year to date net gain to +3.47% while the gross and net exposures of this fund closed the month at 99% and 23% respectively. 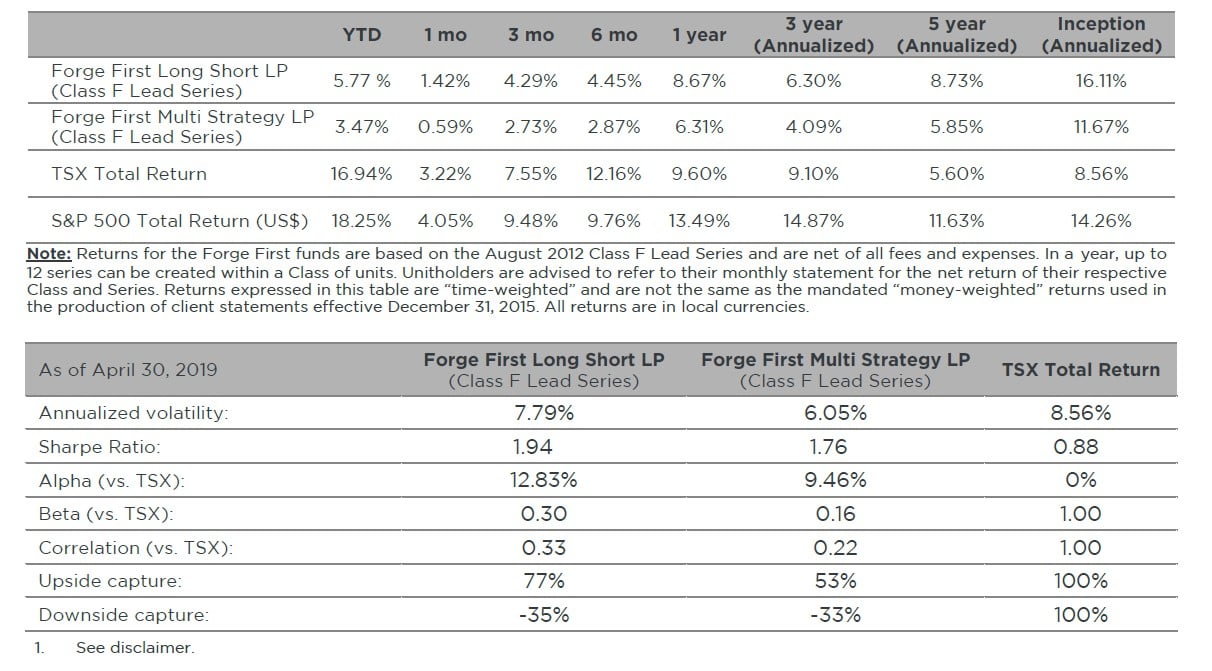 A key to April’s performance was our bullish call on oil, as the ‘black gold’ rose 3.8% and oil-focused equities performed largely as we would have hoped. The source of the strength in crude’s quote has been many fold including, as shown on the graph below right, supply issues in Venezuela (political chaos), Iran (US economic sanctions) and Libya (more political chaos) plus persistently strong demand numbers which have combined to materially tighten the global oil market.

In addition, and looking ahead, we believe the ‘under the radar’ energy story for 2019 will be the dramatic undershoot of US production vs. current expectations. Capital spending budgets are constrained to living within cash flow (a crazy notion for wildcatters in Texas) and coupled with exceptionally high first year decline rates in the largest US shale basins and a declining active rig count (see graph below left), U.S. oil production will be hard pressed to grow anywhere near the forecast >1M bbls/day.

However as we approached month end, shares in energy producers came for sale, despite most companies reporting above consensus free cash flow generation and tabling positive financial revisions for the remainder of 2019. Fortunately, as our energy book increased in value we rolled a portion of our hedge positions to higher prices meaning the downdraft in early May, in both the commodity and shares, had only a muted impact on the funds. In fact, we saw this pullback as a buying opportunity given our expectation that seasonal supply issues will cause the oil curve to become even more backward-dated (when front month contracts trade at prices that are higher than contracts further out on the calendar), serving to fuel further upside in the shares of energy producers.

Technology was another sector that provided a positive contribution to our returns last month. Our long held position in Microsoft (MSFT.US), our favoured investment vehicle to participate on the ‘cloud’ theme, advanced 10% on strong earnings. Also, our short position in Tesla (TSLA.US) fell 15% on more corporate disappointments. But while Tesla was a profitable position, it’s also a good example how we manage the risk associated with shorting a highly volatile large cap tech stock; as one never knows when founder Elon Musk might tweet the shares to a level well above what we see as being their fundamental value. Concurrent with being short the shares of Tesla, we sold puts and bought calls. This tactic enables us to know both the upside and downside with the position.

The last name that merits a word this month in our tech book is Alphabet (GOOG.US), a stock that I still want to call Google. We’ve owned the name for a long time, and needless to say, hadn’t expected the company to miss its Q1 results. Fortunately, we had bought puts ahead of the quarter, meaning despite the 11% post quarter downdraft in the shares, this position was modestly profitable for the funds during April.

On the other side of the ledger, hedges on equity indices including the TSX 60 & S&P 500 were our largest losing positions, followed by the hedge positions we had on our energy book. Beyond these ETF & option positions, single stock names that cost us some performance included Polaris Industries (PII.US), Transocean (RIG. US), TFI International (TFII.CA) & Barrick Gold (ABX.CA).

Speaking of performance, months ago we wondered whether purported valuations for upcoming initial public offerings (IPOs) could present a risk to general markets. Then during April there was a flood of richly-valued IPOs that hit the market. At the time of writing, Uber was set to price its IPO within the range of US$80-$90B, well below the US$120B valuation talk floated months ago. Even at this lowered price range, we view this “gold rush” as an ominous sign akin to the IPO mania experienced just before the tech bubble burst in 1999 as we are seeing far from profitable companies listing at valuations that would give even the most experienced technology investor a nosebleed.

This fact is concerning on its own, but perhaps more concerning is the news that Japanese holding company Softbank is considering IPO-ing their “Vision Fund”. The “Vison Fund” is a private equity fund that invests in pre-IPO unicorns and tries to take those companies public. So yes, in effect they are considering IPO-ing an IPO fund. It goes without saying that this type of activity can work well until the music stops.

Beyond valuation, (not ‘Beyond Meat’, the IPO), the other elephant in the room is trade. As earlier this week, via twitter, President Trump tweeted what could represent the #7 on the chart below, when he threatened to impose additional tariffs on various Chinese goods and accused the Chinese of essentially acting in bad faith by attempting to renegotiate. The situation is very fluid but we believe a positive outcome is largely priced into stocks and any further delay or the complete cessation of talks could have material and negative consequences for stocks as a result of reduced risk appetite and the specter of weaker global economic activity. Of course this explains why while we retain our exposure to energy (given what we believe to be a materially undersupplied market for this summer) we also maintain a diversified short and hedge book within the cyclically-sensitive energy sector and the portfolio at large, as well as maintaining reasonable long exposures to the more defensive sectors of gold, REITs and utilities. 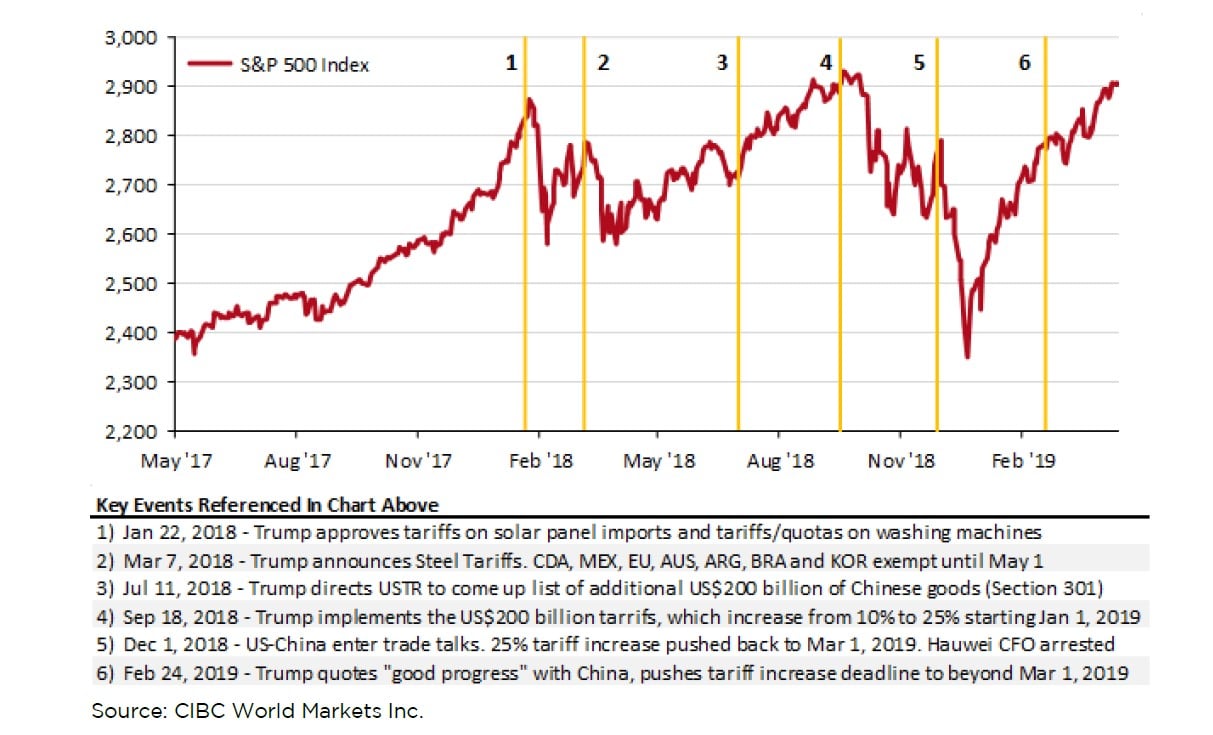 We believe our skepticism of the widespread acceptance of a successful trade war outcome and our subsequent caution regarding the positioning of our funds should put us in good stead regarding any potential turbulence this market may have in store in the near term. After one of the strongest starts to a year in stock market history we continue to believe that it is prudent to play some defense in the near term and wait for confirmation that the good news that is fully priced into the market will actually come.

Please visit our website for information on our funds. Should you have any questions, please contact us.