ValueWalk
Home Info-Graphs The Biggest Trade Wars Ever – How Does It Affect Us? 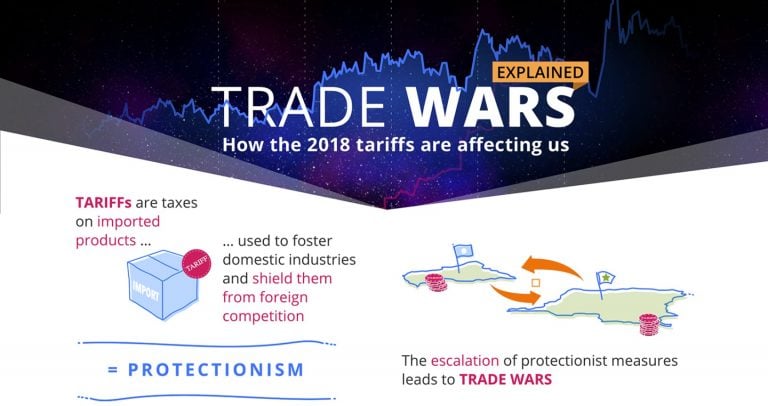 Let’s get back in the timeline of the “biggest trade war in economic history” according to the Chinese Ministry of Commerce. Since January 22, 2018 two of the world’s biggest economies, China and the US, have been on constant dispute. But what is a trade war? What are tariffs and what made Donald Trump turn to protectionism? How does it affect our lives?

Trade wars have far reaching implications in every citizen’s life, thus it’s important to understand the impact this lasting trade war may have on your everyday life. The following infographic gives a summary of the most important terms and the motivation behind this titan fight.

Trade war and tariffs in a nutshell

What exactly is a trade war and what leads to one? A trade war is, in other words, a conflict between two or more economies, including imposing or raising tariffs on each other’s goods. A trade war occurs very often as a side effect of protectionism, which is a government policy to apply restrictions on international trade.

The main idea behind the approach is to protect domestic industry and support local producers.

With raised tariffs (taxes on imports and exports) domestic economy is expected to grow.

What are Donald Trump’s motivations?

In 2016, during his presidential campaign, Donald Trump had a clear vision of American trade and promised to “negotiate fair trade deals that create American jobs, increase American wages, and reduce America’s trade deficit.”

The US trade deficit (when the value of a country’s imports is greater than the value of its exports), has undoubtedly expanded over the past decades. Since 1975, it has been the largest in the whole world. It is hardly surprising that it has become a priority in Trump’s presidency.

The US top trade partners are China, Canada, Mexico, Japan and Germany. Nevertheless, it is the exchange of goods and services with China that caused the largest trade imbalance. The value of the US imports from China in 2018 was $539 million, while the exports’ value was only $120 million, resulting in a deficit of $419 million.

As trade deficit may be the main reason advanced by Trump, there are other reasons behind the trade war, i.e. China not playing by WTO rules or their long-term geopolitical plan “Made in China 2025”.

As a part of his economic policy, Donald Trump imposed a series of tariffs on Chinese goods, including solar panels, washing machines, steel, aluminium, and many more. The main reasons for the move were to balance out the trade deficit, save manufacturing jobs (steel and aluminium tariffs) and to decrease dependencies on China.

In response, China announced tit-for-tat tariffs on $3 billion of US imports, with soybeans among others, the number one agricultural product exported to China. The trade war is escalating.

How will the trade war end?

The final scenario of the trade war still remains a mystery. What we do know is that there is much at stake. The Chinese counter tariffs jeopardized US jobs, especially in manufacturing and farming sectors. Since 2008 the number of farms going bankrupt in the biggest agricultural states has almost doubled.

We are already facing price increase – washing machine prices jumped 16% in 3 months after the tax took effect. New round of tariffs will increase prices of products ranging from food to clothing.

The economic pain reaches also local companies. Tariffs impact production costs which has a catastrophic effect on domestic businesses and their consumers. But big players suffer as well! Apple, which manufactures its products in China, estimates a 6% fall of its shares, Tesla lost 5.2%, when HP fell by 4.5%.