ValueWalk
Home Videos Uber IPO: The Good And Bad Side Of The Story 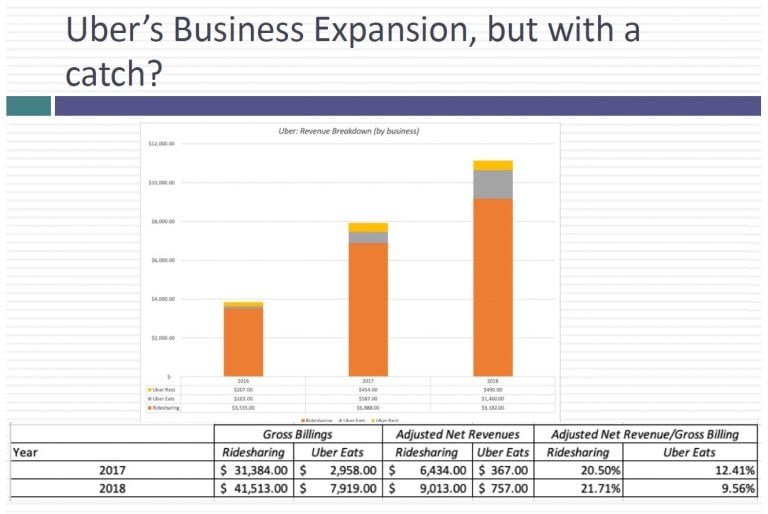 The Uber IPO was launched, with its prospectus being made public on April 12, 2019. In this session, I look at how Uber’s evolution and standing as a company before doing both a top down valuation (where I start with a total market and work down) and a bottom up valuation (where I value a rider and build up) to arrive at value between $52-$56 billion. I also note that if priced against Lyft, you could very well see pricing in excess of $100 billion.

Welcome back. This session I'd like to talk about Uber. When Lyft went public on March 29, 2019, we knew it was only a matter of time before Uber in public and the other ride-sharing companies followed. But I was surprised at how quickly Uber entered the fray with its prospectus filing on April 12th of 2019 I'm going to base my valuation on that prospect. But I have to tell you upfront that I've never seen a company that has been a private company get as much public attention as Uber has over the last five years in good ways and bad ways. This company's been in the news. So it is interesting that finally this most private of all companies is going to go public. I've also valued Uber multiple times along the way. But I've always valued her with tidbits of information. Finally it's good to actually get the financials of the company so I can take a media look at the numbers.

So first thing I did was look at the prospects and the prospect is weighty. It's 285 pages of words. And then 50 to 60 pages of financials and more numbers. It is dense and it's filled with information that I don't think it's particularly useful for investors. Let me take back that information. It's played with data and I don't quite blame all of this. This is the result of information disclosure gone crazy when disclosure requirements are actually having the perverse impact of creating so much information overload that the disclosures are losing their value. For instance there was a sentence in the prospector's that drove some value investors crazy. But Uber said that they might never make money. I'd be quite honest I am gonna cut Uber some slack here because if you let the lawyers write the risk section of prospectus This is exactly what they would say. In fact I own a house two blocks from the beach and I ever had to sell a house and right the risk section like a prospect like the lawyers and a prospect is what I'd have to tell you that with global warming my my what my house will be underwater probably sooner rather than later. And since I live in California it's only a matter of time before not quake or a fire takes out my house. So I would not be too harsh in Uber for that statement. But let's take a deeper look at what Uber said in that statement.

The first thing to note is how Uber defines its market. It's interesting because left when it went in its prospector's tried as hard as it could to never use the word car service to describe what a day. Instead it called itself a transportation services company Uber calls itself a personal mobility business and this business in many ways is even bigger than the transportation services business. Fact Uber has a picture in the prospectors that tells the world how big they think this business says. It's two trillion dollars because it includes public transit public car service of private transportation pretty much everything in fact. I'm surprised that Uber did not include the categories that people spend walking from point A to point B as part of his business. But in a sense again I can understand why Uber is doing what it is and what Lyft was doing is what which is you want to define the business as big as possible because you want a big pricing in a big band you to go with it. I'd be a little cynical about about the size of this business though because I have. I have. I'm pretty sure that two trillion is a vast overreach.

So let's start with the good news over. It's a growth story. And the growth stories particularly in the numbers that reflect how quickly they've grown their cost of business. No it's gross billings are up 100 and 160 percent its net revenues are up almost 200 and 11 percent. Its writers are up almost doubled. A little more than doubled over the last two years. And it's trips have gone from one point eight billion to five point two billion. The growth has been phenomenal. That is the good side of the story. The bad side of the story is while it's been growing Uber has been losing money and it's been losing tons. In fact it's in the prospectus Uber estimate what it's called it's adjusted EBITDA. Its rows you look at how much it's losing. And even in the roads you look it lost one point eight five billion dollars in 2018. Now that adjusted EBITDA is not the measure that I think truly measure the earnings of a company. And so I just did the rabbit further by first bringing back the Dow because I went to an operating loss nodded and eBid docked and that also reversed something that Uber did to get to their adjusted EBITDA which is take out the effect of stock based compensation stock based compensation is like any other compensation as far as I'm concerned. So my operating loss adjusted for Uber.