In just a few short years, Chinese vendor Oppo has become a dominant player in the global smartphone market. On the other hand, Huawei has vowed to go past Apple and Samsung to become the world’s largest smartphone vendor. Oppo has proved with the Find X and F11 Pro that it can make powerful and beautifully designed premium smartphones. Now Oppo has unveiled its latest Oppo Reno 10X Zoom smartphone that promises an excellent photography experience. Huawei P30 Pro makes the same promise. Let’s take a detailed look at these phones to help you decide which one could be a better buy for you.

Oppo has launched two devices in the Reno series. The standard version is a mid-range phone while the 10X Zoom Edition caters to the premium segment. The company will also unveil a 5G variant of 10X Zoom on April 24.

Oppo’s 10X Zoom device measures 162 x 77.2 x 9.3 mm and weighs 210g. It comes in Jet Black and Ocean Green color options, both of which look beautiful. It has a fully bezel-less design with no display notch. To avoid the notch, the company has added a “shark fin” pop-up selfie camera that slides up like a wedge from the top of the phone.

The “shark fin” structure holds the front camera, flash, and earpiece. Oppo claims to have tested the slider camera for 200,000 standard uses. It folds into the body when not in use. The selfie camera pops up in just 0.8 seconds. On the back panel, it has a vertically aligned triple camera setup. Its tapered rear glass and rounded corners give the phone a premium feel.

The Oppo Reno has an in-display fingerprint sensor for authentication and security. It lacks the 3.5mm headphone jack. The Huawei P30 Pro also has an under-display fingerprint sensor, and lacks the traditional audio jack. Unlike 10X Zoom, the P30 Pro boasts an IP68 rating for water- and dust-resistance, meaning it can survive in up to 2 meters deep water for up to 30 minutes.

Huawei has used a tiny waterdrop notch to accommodate the selfie camera instead of opting for the pop-up selfie camera mechanism. The display is curved on the edges, giving it a premium look. The P30 Pro comes in Black, Aurora, Amber Sunrise, and Breathing Crystal colors.

The P30 Pro measures 158 x 73.4 x 8.4 mm and weighs 192g, making it thinner, lighter, and smaller than the Oppo flagship. It has a metal and glass body with nine layers of what Huawei calls Nano Optical Layer.

Both handsets feature OLED screens, which deliver more accurate and vibrant colors than their LCD counterparts. The Oppo Reno 10X Zoom features a 6.6-inch OLED panel with no notch. As a result, it has an impressive 93.1% screen-to-body ratio. It would deliver an immersive experience when watching videos or playing games. It has a resolution of 1080 x 2340 pixels, a pixel density of 387ppi, and 19.5:9 aspect ratio. The screen is protected by Corning’s latest Gorilla Glass 6.

The Oppo Reno 10X Zoom Edition is powered by Qualcomm’s latest octa-core Snapdragon 855 processor. The chipset is paired with Adreno 640 GPU. It comes in different RAM and storage options of 6GB+128GB, 6GB+256GB, and 8GB+256GB. It also supports external storage of up to 256GB via a microSD card slot.

The processor and RAM on Oppo Reno are sufficient to run even the most demanding games without any lag. To further enhance the gaming experience, Oppo has added a Game Boost 2.0 acceleration engine with Touch Boost and Frame Boost accelerations. In terms of software, it runs Oppo’s custom ColorOS 6 skin on top of Android 9 Pie.

Reno packs a giant 4,065mAh battery with 20W Super VOOC 3.0 charging. The Super VOOC 3.0 technology maintains high voltage during the final leg of charging. It means the last 10% charging will no longer feel slow. However, it lacks wireless charging.

The P30 Pro packs 8GB RAM and 128GB or 512GB of internal storage. Some markets also get a 256GB storage variant. The device has a nano-memory card slot that supports external memory of up to 256GB. The Huawei flagship sports a giant 4200mAh battery with 40W ultra-fast charging. Huawei’s proprietary charger delivers up to 70% charge in just 30 minutes. It also supports reverse wireless charging and 15W fast wireless charging. The Oppo Reno 10X Zoom lacks both technologies.

On the front, the Oppo Reno has a 16-megapixel selfie camera located in a “shark fin” pop-up mechanism. The “shark fin” structure also holds the earpiece and flash besides the front camera. It pops up in just 0.8 seconds when you enable the flash or switch to the front camera. If you accidentally drop the phone, the shark fin will automatically retract.

The Huawei P30 Pro lives up to the hype. It gets a quad camera setup on the back. Its rear camera setup includes a 40MP primary lens with f/1.6 aperture and OIS, a 20MP wide-angle lens with f/2.2 aperture, an 8MP Periscope zoom lens that offers 5x optical zoom and 10x hybrid zoom, and a 3D Time-of-Flight sensor that creates a 3D image of the scene based on the time taken by light to bounce off various objects in the scene.

The P30 Pro camera performs incredibly well in low-light conditions. It is also capable of shooting videos using two lenses simultaneously. On the front, it has an impressive 32MP selfie camera with f/2.0 aperture. According to DxOMark, the Huawei P30 Pro is the best smartphone camera in the world.

The Oppo Reno 10X Zoom has been launched in China, and will soon arrive in European markets. Both Huawei and Oppo have a negligible presence in the US market, so these devices are unlikely to arrive in the United States. The 10X Zoom Edition has been priced at 3,999 Yuan for the 6GB+128GB version, 4,499 Yuan for the 6GB+256GB variant, and 4,799 Yuan for the high-end 8GB+256GB model. Oppo is expected to reveal the European prices next week.

The Huawei P30 Pro, on the other hand, is much more expensive. It has been priced at €999 for the base model with 8GB RAM and 128GB storage. The higher end 8GB+512GB version costs €1,249. If you can afford the device, it gives you no reason to complain. 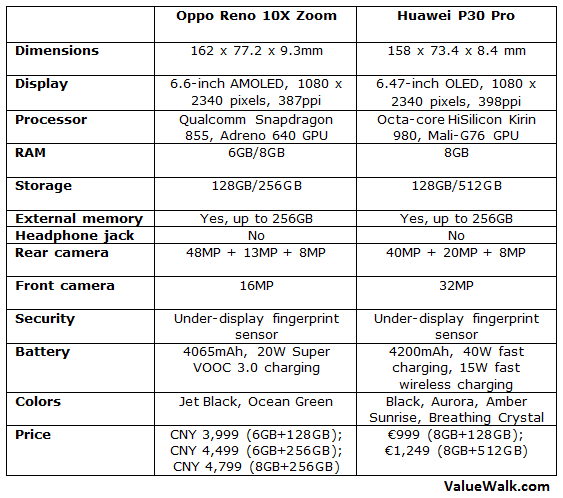