LG Electronics’ flagship smartphones are often overshadowed by devices from its compatriot Samsung. The latest LG G8 ThinQ went on sale in the US on April 11, a few weeks after Samsung’s Galaxy S10 series hit the store shelves. Both of them are powerful devices and cater to the premium segment, but they are considerably different. If you are planning to purchase one of them, this LG G8 ThinQ vs Galaxy S10 Plus comparison could help you decide which one is better for you.

Both devices have a metal and glass body with a curved back, which helps you hold the phones comfortably in your hand. The LG G8 ThinQ has a display notch at the top and a chin at the bottom. It is smaller and lighter than the S10 Plus, most likely because it has a smaller display.

The LG G8 ThinQ measures 151.9 x 71.8 x 8.4mm and weighs 167g. On the back panel, it has a dual camera setup and a circular fingerprint sensor. The device comes with an IP68 rating for water resistance for up to 30 minutes at a depth of five feet. It also boasts MIL-STD-810G military-grade durability, meaning it has been drop-tested from shoulder height on rough surfaces. Its front glass is protected by Corning’s Gorilla Glass 5 while the rear panel is covered with the latest Gorilla Glass 6.

The Galaxy S10 Plus has opted for a hole-punch Infinity-O display instead of a notch to offer more usable screen area. It has two holes in the top right corner to accommodate the selfie cameras. Just like G8 ThinQ, it retains the 3.5mm headphone jack. It measures 157.6 × 74.1 × 7.8 mm and weighs 175g. The phone is available in Prism White, Prism Black, Prism Blue, Ceramic Black, and Ceramic White colors.

Both the G8 ThinQ and S10 Plus feature OLED panels, but different OLED technologies. The LG G8 ThinQ sports a 6.1-inch flexible P-OLED display with a 19.5:9 aspect ratio and 83.5% screen-to-body ratio. It offers 564ppi of pixel density and 3120 x 1440 resolution. The device has a maximum screen brightness of 600 nits. LG Electronics claims to have used an AI Engine in the G8 ThinQ display that automatically changes color profiles based on what is displayed on the screen.

On the other hand, the Galaxy S10 Plus features a gorgeous 6.4-inch Dynamic AMOLED infinity-O panel with 19:9 aspect ratio, and 88.9% screen-to-body ratio. It has a 522ppi of pixel density. While the G8 ThinQ screen is protected by Gorilla Glass 5 and offers HDR10 support, the S10 Plus has Gorilla Glass 6 and HDR10+ support.

Both the devices are equipped with Qualcomm’s latest Snapdragon 855 processor with Adreno 640 GPU. The international version of Galaxy S10 Plus runs Samsung’s in-house Exynos 9820 chipset with Mali G76 graphics processor. Both the devices are beasts when it comes to performance. You won’t notice any lag while playing demanding games or running multiple apps on either device.

The G8 ThinQ packs 6GB RAM and 128GB of storage. LG has included a microSD card slot that supports external storage of up to 2TB, so you never have to worry about storage. It comes with a USB Type-C port and Bluetooth 5.0, same as the Galaxy S10 Plus. For audio, it gets the bottom-firing Boombox Speaker and Crystal Sound, which are small actuators that vibrate the surface of the glass to produce better audio.

The Galaxy S10 Plus comes in a variety of storage options. You can choose the 8GB RAM variant with 128GB storage or 512GB storage. If you want more RAM and storage, there is a 12GB RAM model with a whopping 1TB storage. It also features a microSD card slot with external memory of up to 512GB. Audio on the S10 Plus is tuned by AKG.

The G8 ThinQ packs a decent 3,500mAh battery, which is slightly larger than the 3,000mAh battery inside its predecessor. It supports 21W fast charging via Qualcomm’s Quick Charge 3.0 technology, which delivers up to 50% charge in just 15 minutes. The device also supports 9W wireless charging

Samsung’s device also supports Wireless PowerShare, allowing you to charge other compatible devices and accessories by placing them on the back of your Galaxy S10 Plus.

Both handsets run Android 9 Pie with a custom skin on top. The LG G8 ThinQ runs the company’s LG UX 8.0 skin. LG has improved its custom interface but it’s not as refined as the One UI skin on Samsung’s Galaxy S10 Plus. The One UI is designed to offer an intuitive experience on phones with larger displays. It displays content in the top half of the screen and navigation options near the bottom to ensure that they are within the reach of your thumb.

LG has also added a new security feature called Hand ID, which uses the front cameras to recognize your palm for authentication. Only time will tell how popular it becomes in the market. It’s pretty annoying to hold the phone in one hand and show the palm of the other hand to the front camera for unlocking. If you want to unlock the device using Hand ID, both of your hands will be busy.

Both the smartphones have excellent camera capabilities. The US version of LG G8 ThinQ has dual cameras on the back, though the company has launched a triple camera variant of the device in some markets. The US version features a 16MP wide-angle lens with f/1.9 aperture and 107-degree field of view and a 12MP standard lens with f/1.5 aperture.

On the front, it gets an 8MP lens with f/1.7 aperture and an infrared time-of-flight (TOF) sensor called Z Camera. The Z Camera enables touchless Air Motion gestures that allow you to take screenshots, answer calls, and switch between apps. You can also increase or decrease volume using gestures without touching the device.

The LG G8 ThinQ has gone on sale in the US on April 11. It has a starting price of $820 in the United States. However, LG and its carrier partners are offering an introductory $150 discount on the device, bringing down the price to $670. T-Mobile has dropped the price to $620. 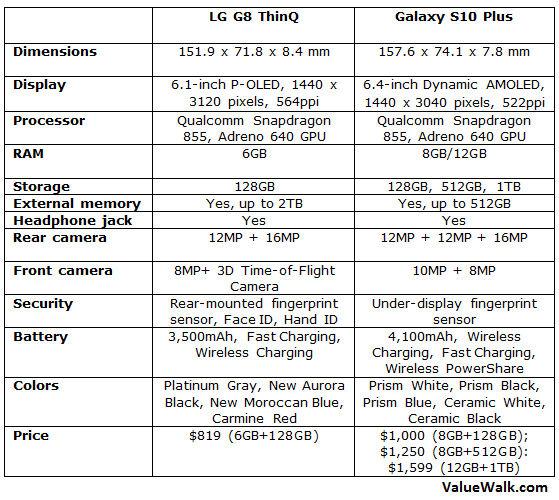