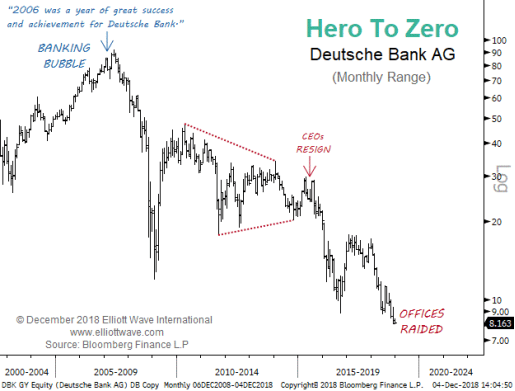 An European icon’s fall from grace is almost complete.

On November 29, 170 police officers and tax investigators raided Deutsche Bank’s head office and other locations in Frankfurt. The ambush was part of a money laundering probe whereby the German bank is suspected of helping clients to set up offshore companies in tax havens. Investigators are also looking at whether Deutsche Bank failed to report suspicious transactions. This is the latest, and most high-profile, “bad news” in connection with the once mighty German bank. On the Deutsche Börse on December 4, its shares were changing hands for around €8.

It’s a long way from 2007 when, at the height of the banking bubble, Deutsche Bank shares reached a high of €92.05. Back then, writing in March 2007 for the 2006 annual report, Deutsche Bank CEO Josef Ackermann noted, “2006 was a year of great success and achievement for Deutsche Bank” and “several powerful and fundamental trends are shaping our operating environment.” The share price peaked two months later and has since fallen by over 90%.

Heroes of bull markets tend to become the villains of bear markets. When social mood is trending positively, as reflected by rising stock prices, the icons of the day are put on a pedestal thanks to the general feeling of euphoria. When social mood trends negatively, as reflected by declining stock prices, those icons are subsequently blamed for the downturn. They are vilified, investigated, put on trial and, in some cases, jailed.

Our chart shows how circumstances have changed for Deutsche Bank since 2007. The bank has now become a by-word for inept management. In 2007, nobody saw anything but blue sky. In 2018, nobody sees anything but probable bankruptcy.