Home Business BoA: Junk Bonds Are Not A Problem Area For The Market

Netflix’s decision to return to the junk bond market with a $2 billion junk bond offering this week, has sparked concerns among the group’s investors that the business is borrowing more than it can afford.

According to the company, the $2 billion in dollar and euro-denominated junk bonds will help it finance its massive spending on original movies and television shows.

But investors are worried that Netflix‘s spending splurge is landing the business with more debt that it can afford, especially as it is hemorrhaging cash.

According to the group's figures, Netflix will burn through $3 billion in cash this year, and $3 billion in 2019. To finance this spending, long-term debt has risen from $6.5 billion reported at the end of 2017 to $8.3 billion as of September 30, before the latest issue according to data compiled by the Financial Times.

Netflix isn't the only junk bond issuer Wall Street is starting to become concerned about. During September, investors pulled money out of the biggest exchange-traded fund that bets on high-yield credit at the fastest pace in almost two-and-a-half years. At the same time, other investors are buying options against further declines to offset losses if junk debt sells off.

As well as junk debt, the size of the BBB-rated market is sparking concerns among some analysts.

BBB-rated corporate credits are generally considered to be more creditworthy than high-yield bonds, but the size of the market has grown so rapidly in the years since the financial crisis, that analysts are now worried that the market might not be able to manage the losses from BBB rated debt when the cycle turns.

The size of the BBB-rated corporate bond market and the risks it poses to the rest of the credit market is the topic of a recent credit market report from the credit team at Bank of America.

According to the report, today the BBB-rated corporate bond market is worth around $3 trillion, that's more than double the size of the high yield market ($1.2 trillion), which has grown at a much slower rate since the financial crisis. Historically, when the credit cycle turns, around 10% to 15% of BBB's are downgraded to high-yield, earning themselves the undesirable Fallen Angel label in the process.

BoA's report notes that considering the size of these two markets today if 15% of BBB-rated credits were downgraded, in line with the historical average, "it would not be easily absorbed." Put quite simply, the market is concerned about elevated Fallen Angel volume during the next recession.

But according to the bank's analysis, it is unlikely the market will see a complete disaster scenario when the cycle turns for three reasons.

First of all, it is likely that in the next downturn, the "rate of Fallen Angel downgrades will be much lower than in the past" because today the Investment Grade rating classification is much more robust than it has been in the past. As a result, today, fallen angels tend to be "fraud cases, financial companies and business models that no longer make sense." Further, BoA's credit analysts note "the largest triple BBB-rated capital structures now more than ever tend to have stable cash flows, and thus are mostly unlikely Fallen Angel candidates during the next recession." 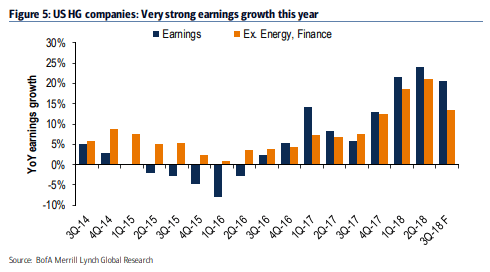 As well as improved controls and cash flows, BoA's report goes on to note that today foreign ownership of the Investment Grade credit market is approximately 32%, up from 20% in the early 2000s. This is important because the analysts believe that foreign money is much more "sticky," and tends to be from institutional investors who have a long-term duration. Hence "the rate of forced selling of Fallen Angels should be lower this time."

Thirdly, for investors that can hold to maturity, a rating downgrade does not tend to be a significant event, making the issue of holding a Fallen Angel less relevant. As BoA explains:

"For investors that can hold to maturity or default -- and many increasingly can -- the issue of Fallen Angels is less relevant. This is because the average annualized BBB default loss for 1-year holding periods is 33bps vs. 17 bps for As. Investors are almost always paid much more than the differential. However, obviously, the performance loss for ratings-triggered selling is steep."

So, according to BoA's analysis, it is unlikely that a sudden spike in Fallen Angels will destabilize global credit markets. Another favorable tailwind for credit investors is the fact that leverage is declining across the board. BoA's report notes:

"Because of very strong earnings growth this year, and with the typical company issuing less debt (M&A does not impact the median company), it follows that median corporate leverage ratios are now declining. This effect is especially pronounced for high yield and also BBBs, but less so for A-rated and higher companies. We think credit investors understand this, which is why they are remarkably unconcerned about fundamentals - highly unusually this late in the cycle."

Oil: The Bet Of The Oil Nations

February’s Jobs Report Not Nearly As Good As Suggested