ADW Capital Partners sent a letter to the board of Fiat Chrysler Automobiles on Thursday, asking for just about everything an activist investor could possibly ask for. The activist said it believes the undervalued company should take several steps to maximize shareholder value. Such efforts include spinning off or merging its Fiat brand, separating its Alfa Romeo/Maserati business from the firm, and consolidating the company with a U.S.-based peer like Ford or General Motors. ADW also encouraged Fiat Chrysler to expand its investor base, increase its dividend payout ratio, and rename the company JeepRAM. The automotive company has not responded to the letter as of yet.

Short seller VGI Partners increased its bet against Corporate Travel Management by 23% last week, labeling the Australian company’s response to its initial short report as weak. In its initial report, the activist said it had visited all of the company’s European offices and found that six of the 12 do not exist, and neither do four of its 17 U.S. offices. Now, VGI is saying that Corporate Travel is using a lowered discount rate to calculate its goodwill, which currently stands in the region of AU$407 million, and believes the firm is vulnerable to impairment charges.

Corporate Travel has since hit back at the short seller, contending that VGI does not understand the company’s business model. The Australian firm said that said VGI has a strong financial interest in inflicting uncertainty among its investors and had made “mischievous and misleading claims” that have nothing to do with the financial performance of the business.

The company’s founder, Jamie Pherous, said on Monday that short sellers should have to abide by the same rules as the companies they target and said that there is room for a regulator to ensure all statements are factually accurate.

Also, Kase Learning announced that it will be hosting
its second short selling conference on December 3. Readers of this newsletter can get a 10% discount on the conference – the only idea-led conference to focus exclusively on shorts – using the discount code ACTIVIST10. The code is valid whether you register to attend in-person or watch via the livestream.

The number of U.K.-based companies publicly subjected to activist demands between January 1 and November 09 in respective years. 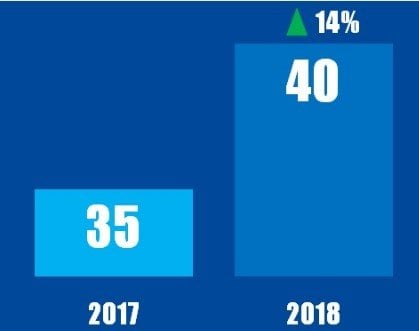