Huawei recently surpassed Apple to become the world’s second largest smartphone vendor, right behind Samsung. Apple and Samsung had already announced their flagship phones of 2018. And Huawei unveiled its Mate 20 series phones on Tuesday. The Huawei Mate 20 Pro – the flagship of the four Mate 20 phones – will undoubtedly be one of Huawei’s most popular and most powerful premium phones. And it is drawing instant comparisons with the best from Samsung and Apple. So, here’s a detailed Huawei Mate 20 Pro vs Galaxy Note 9 vs iPhone XS Max comparison to help you decide which could be a better buy.

Huawei took everyone by surprise when it announced not one but four different Mate 20 models: the Mate 20, Mate 20 Pro, Mate 20 X, and the limited edition Mate 20 RS Porsche design. Each of them is different from others in some way, but all of them pack triple cameras, a notch design, and Huawei’s in-house Kirin 980 processor.

All three phones have a premium design, and they all have tried to push the limits of how large a phone could get without getting too big to handle. All of them have nearly the same screen sizes of around 6.4 inches. The Mate 20 Pro is the lightest of the three at 189g compared to 201g for the Note 9 and 208g for the XS Max. 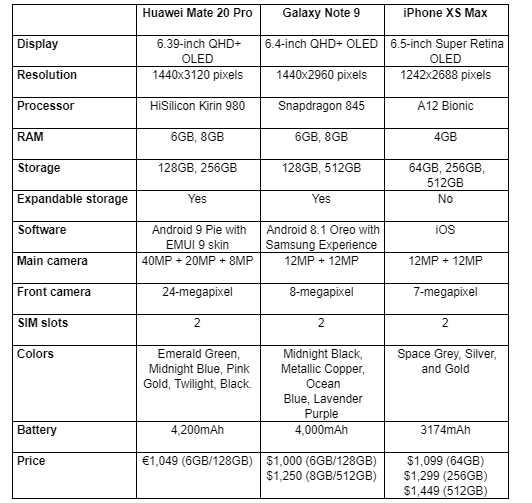 All the three handsets use OLED screens that deliver deeper blacks, vibrant colors, and sharp images. The Mate 20 Pro gets a 6.39-inch QHD+ curved OLED display with 1440 x 3120 resolution. You can’t ignore the notch at the top that houses the 3D face unlock feature similar to Face ID on the XS Max.

The Mate 20 Pro will be available in 6GB and 8GB RAM options and 128GB or 256GB storage variants. If you need additional storage, the device supports nano-SD cards, which are relatively smaller than microSD cards. It comes with dual-SIM card slots, stereo speakers, and an IP68 rating for water- and dust-resistance. The Mate 20 Pro is powered by Huawei’s Kirin 980 processor, which is built using the 7nm manufacturing process.

The iPhone XS Max gets Apple’s own A12 Bionic chipset built using the 7nm process. Unlike Mate 20 Pro and Note 9, it packs only 4GB RAM. But don’t let the lower RAM fool you. It has outperformed every smartphone on the planet in speed tests. Of course, the Mate 20 Pro hasn’t been tested yet. The XS Max also has an IP68 rating for water-resistance.

On the other hand, the Galaxy Note 9 runs the octa-core Snapdragon 845 chipset based on the 10nm manufacturing process. The Snapdragon 845 might not be as powerful as the 7nm A12 or Kirin 980, but it is powerful enough to handle any task you throw at it. The Note 9 comes in 6GB and 8GB RAM options and 128GB or 512GB storage variants. It also includes a microSD card slot of up to 512GB.

In terms of battery, the Note 9 packs a huge 4,000mAh battery with fast charging and wireless charging support. A recent test conducted by PhoneBuff shows that the Note 9 lasts longer than iPhone XS Max’s 3174mAh battery. The XS Max also supports wireless charging and fast charging, but you’ll have to shell out extra money to enjoy these features because Apple ships the phone with a lousy charger.

Huawei proved its mettle in the photography department with the P20 Pro. The Mate 20 Pro has only tried to improve upon the P20 Pro’s already great camera. On the back, it has a 40MP wide-angle lens with f/1.8 aperture, a 20MP ultra wide-angle lens with f/2.2 aperture, and an 8MP telephoto sensor with f/2.2 aperture. The cameras are arranged in a rectangle on the back. The phone sports a 24MP front camera for selfies.

Huawei claims the triple camera system on Mate 20 Pro provides focal lengths similar to the 16-270mm zoom lens on professional cameras. It also gets an AI-based Portrait Color video mode that desaturates the colors in the background to focus on the subject while shooting videos. Huawei developed the Mate 20 Pro camera in collaboration with Leica.

The XS Max and Note 9 both sport a 12MP wide-angle lens and a 12MP telephoto lens. These phones also have some AI tricks up their sleeves to improve the picture quality. The Note 9’s wide-angle lens has variable apertures to take better pictures in low-light conditions. It also has a Scene Optimizer feature that automatically adjusts the settings depending on the scene, and a Flaw Detection technology that notifies you if something is wrong with the photo you just clicked. The Note 9 features an 8MP front camera.

The iPhone XS Max camera gets a Smart HDR feature to enhance photos. It also offers optical image stabilization and stereo recording in videos. The XS Max features a 7MP selfie camera. In a recent test, the XS Max was pitted against the $10,000 Canon C200 cinema camera. Though it couldn’t match the cinema camera, it delivered ‘mind-blowing results.’

The Mate 20 Pro runs Android 9 Pie with Huawei’s custom EMUI 9 skin on top. The Note 9 runs the older Android 8.1 Oreo with Samsung Experience skin, but it is expected to get the Android 9.0 Pie update soon. The XS Max runs Apple’s iOS 12 out of the box. The iOS 12 improves performance and energy efficiency and brings new features such as the Screen Time, Siri Shortcuts, improved notifications, better Control Center, and a revamped Stocks app.

For security, the XS Max has an improved Face ID technology. The Mate 20 Pro also has a Face ID-like 3D facial recognition system, but the Chinese company has gone a step further and integrated a fingerprint sensor under the screen. All you have to do is put your finger on the screen to unlock it. Apple’s Face ID has proven to be secure and reliable. So, the XS Max appears to have an edge when comparing the Huawei Mate 20 Pro vs Galaxy Note 9 vs iPhone XS Max in terms of security.

The Note 9 gets a pill-shaped fingerprint sensor on the back, which is not the most convenient way to unlock your device. Samsung has also added a combination of facial recognition and iris scanning to unlock the device, but it’s not secure enough to authenticate payments.

Huawei hasn’t announced if or when the Mate 20 Pro will become available in the United States. The company revealed that the 6GB RAM and 128GB storage variant is going to cost EUR 1049 in European markets. It puts the device right in the middle of the Note 9 and XS Max in terms of pricing. It was expected considering the Mate 20 Pro is jam-packed with premium features.

All the three phones are packed with the best features Apple, Samsung, and Huawei have to offer. The Mate 20 Pro is unlikely to affect the XS Max sales, and the Note 9 has an edge over the Mate 20 Pro in the US market due to its brand appeal. However, in Europe and other markets where Huawei has a strong presence, the Mate 20 Pro could eat into the Note 9 sales. The gist of this Huawei Mate 20 Pro vs Galaxy Note 9 vs iPhone XS Max comparison is that the Mate 20 Pro is a great phone, but it will attract buyers only in select markets.