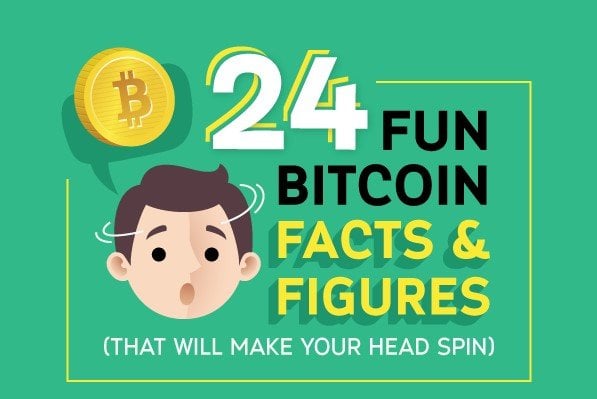 When one thinks of Bitcoin, there are always two trains of thought. Some see it as a great investment, a sign of progress for digital media. Others are more than happy to point out the many disasters, price drops, and even hacks that have occurred. It’s safe to say that Bitcoin is still a mystery to many to this day. However, it’s not entirely ambiguous. Here’s an interesting infographic on some of the more interesting Bitcoin facts:

Bitcoin is the most popular cryptocurrency, but it’s not the first. That distinction belongs to Digicash, founded nearly a decade beforehand. Bitcoin may be very controversial today, but it’s still relatively new. Founded on October 31, 2008, it’s only been around for a decade, yet as the infographic shows, it has “died” so many times that there are even websites that list all of these obituaries!

Many organizations run Bitcoin transactions, but nobody knows who actually created the cryptocurrency. The only ID for the currency creator is a person or group named “Satoshi Nakamoto”. Some people suspect that Satoshi Nakamoto is an alias for the CIA. Another theory is that Satoshi Nakamoto is a combination of Samsung (Sa), Toshiba (Toshi), Nakamichi (Naka) and Motorola (Moto). These are four worldwide businesses that were founded in Japan.

Satoshi Nakamoto may (or may not) be real, but the creation of Bitcoin earned him a nomination for a Nobel Prize in Economic Science. As an homage to its creator, the smallest unit of Bitcoin is called a “Satoshi”, a one hundred millionth of a BTC.

Bitcoin can be used to buy many things now, but it wasn’t always used to pay for glamorous and expensive items. The first ever purchase was for two pizzas! Bitcoin is unique, acting as a commodity and currency. You can buy with Bitcoin, and you can trade Bitcoin with others.

Today, BTC is often used in place of or converted into real cash. That’s impressive since it doesn’t have a physical form by itself. They only exist in Bitcoin blocks which are digitally mined for profit.

Even though you can pay with Bitcoin, only approximately 800 people have used it in the US for taxes. Many high-profile companies accept Bitcoin as payment, however, including Microsoft, Dell, and Overstock, and Mozilla once tested Bitcoin as an option for donating to the organization. The result? The average number of donations had reduced by 7.5%.
Japan owes a lot to Bitcoin which is why they have accepted it as a legal form of payment since the beginning of April 2017. In the US alone, there are more Bitcoin ATMs than in the rest of the world COMBINED.

Two keys are generated to buy and sell through Bitcoin, the public and private key. While hacking is a concern, there are over 4 billion combinations to choose from to guess the private key. The only proof of ownership for Bitcoin isn’t the account or the wallet, it’s the private key.

If you don’t like Bitcoin, you might not like the fact that it can’t be completely stopped. It was designed to be regulated only, so there’s no way to completely remove it. Nevertheless, some countries have banned the currency as a form of payment. Countries like Argentina consider Bitcoin a safer means of storing value while others, like Bangladesh and Bolivia, have made it illegal.

Transactions with Bitcoin are kept anonymous, so you won’t be traced. Strangely, the blockchain technology used isn’t anonymous, meaning any accounts and transactions themselves are public.

Experts say Bitcoin networks can compute a lot of data, more than 500 supercomputers combined. An interesting example of this being applied in the real world is in the case of peer-to-peer payments which can take months to reach a credit card settlement. For Bitcoin, that time drastically reduces to ten minutes.

The maximum number of Bitcoins that will ever exist will be 21 million, one million of that is owned by its founder/s. This number won’t even be mined until 2140, at the earliest.

Bitcoin’s price has surpassed the value of gold twice. The first time this happened was in November 2013, and then again in March 2017.

It’s interesting to note transactions made in Bitcoin, during 2013, were worth about $147 million. It was officially tagged as a “Shit Load of Money”. And while that was a lot back then, transactions in the cryptocurrency have risen over the years. From 2015 to 2017, they rose by 1289%. It’s become so in vogue that you can get a debit card for bitcoin. In fact, you can choose from seven different types.

A young man named James Howell once threw away a hard drive containing 7,500 Bitcoins. He’s regretting that now, especially since it amounted to a loss of over $4m.

There’s no such thing as a refund for Bitcoin, as one user found out when they sent a transaction worth over $137,000 in BTC. The reason? They accidentally sent it while attempting to purchase something for $5.

The FBI themselves have a Bitcoin wallet, comprised of all seized assets. This includes assets of the infamous Dread Pirate Roberts, who ran an online black market under the alias “Silk Road”.

The Winklevoss twins, famous for their lawsuit against Mark Zuckerberg, invested in Bitcoin when it only amounted to $9 per BTC. Nowadays, they own approximately 1% of all Bitcoins in existence.

Bitcoin has a market cap of $160 million, which is far ahead of Disney, McDonald’s, and IBM. With the help of Google and Richard Branson, Blockchain has raised $40M. Wikileaks received the 4000th Bitcoin as a donation back in November 2016. Its value around that time was $3 Million.