ValueWalk
Home Business Are Hedge Fund Managers The Dinosaurs Of The Digital Era?

The world experienced Tulipmanie, or infamously remembered as the Dutch Tulip Mania. At the height of the bubble, a single stem Sempres tulip was exchanged for 12 acres of land! But by February 1637, this mania was turned on its head.

With 2018 almost over, we are possibly getting ready for another Tulip Mania, this time with Bitcoins?

Bitcoin is the most popular digital currency.

What is Bitcoin and why does it matter?

Unless you have been living under a rock in the last 5 years, well done on NOT having heard of Bitcoin! But if you have heard of Bitcoin but still confused on what it actually is, congratulations! You are not alone. This new phenomenon all started in the late 2000s after the housing crash. A person (or thing, people are still arguing about this) called Satoshi Nakamoto introduced Bitcoin to the world. If you are keen to know what it is, watch this quick video by Mashable : What is Bitcoin and how does it work?

Now that you know a bit more than everyone else on this digital currency, let’s see how it did in prices. 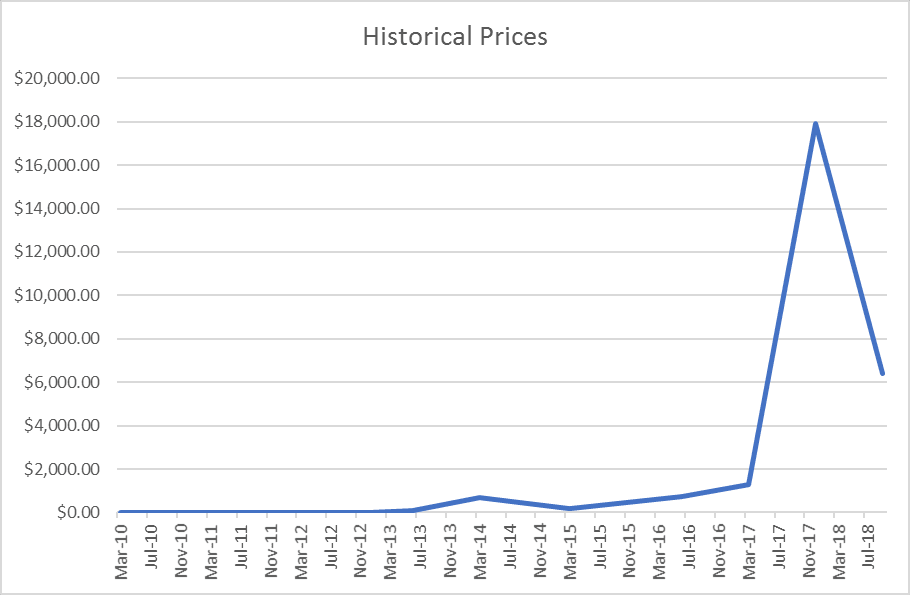 And if you’re thinking you’re seeing a pulse of a hedge fund trader, you’re probably not too wrong.

This is a classical example of supply, demand and hysteria. As Bitcoin was gaining traction, many people started paying attention. This outstrip demands, as the number of bitcoins mined was not quick enough to meet the number of demand (and it’s also partly how bitcoin was designed to work). The mania continued right through 2017, and it was even speculated to pass $100 000 price point.

However, the New Year happened, and people started sobering up to the fact that the fizz could be running out on this bubbly. Today, the price of a Bitcoin is around $7000.00, which is half of its peak.

Which way is paradise, up or down?

The unfortunate side-effect to this is that these governments have not figured out the best way to control blockchain technology itself nor digital currency. This is a paradox as it is against the very nature of blockchain itself. Hence, a currency that can’t be controlled by the elected few is not good for business nor running a country.

Based on this, many different regulatory boards have banned or rejected application for digital currency to be treated as legal tender. This State vs People approach has been one of the major stumbling blocks of the digital currency.

What’s the big deal if a couple of Regulatory bodies reject digital currencies?

A very big deal. Due to this, the big players such as institutional investors can’t support investment into digital currency. Their own governance prohibits them to take a position for or against digital currencies if the local SEC equivalents have banned them outright.

The writing is on the wall then?

Perhaps, but I wouldn’t dismiss this quickly. China has banned all forms of cryptocurrency trading in China. But, in the same breath, the country has launched an new state-controlled cryptocurrency index. Which is peculiar, as it’s like saying let’s have a small-arms ban nationwide, but let’s invest our tax money in a US government small arms factory. And if you believe that, I have a swampland in Florida to sell you.

Behind the scenes, China is heavily invested in blockchain technology. The digital Red Army are exploring concepts and experimenting with theories to understand how the State can make blockchain work without disrupting its way of life.

This is not the only government that has made similar approaches. Most of the G7 nations are equally invested in the same approach.

The jury is still out on this one, but I won’t be selling all my digital currencies just yet. It might be taking a heavy beating now, but given that we have an impending Iranian Sanction, war in Syria, a proxy war in Yemen, Brexit, and a digital future ahead, I think there is still hope in the chaos of digital currency era.

Do you agree, where there is chaos, there is money to be made?