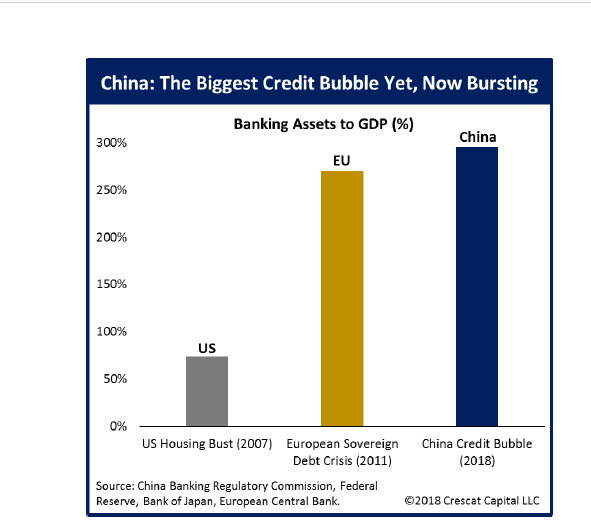 Crescat Capital Q2 letter to investors on the China credit bubble and why its a good short.

Our current three best macro ideas today are complementary plays on the unwinding of currency and financial asset bubbles at a likely peak of a global capital cycle, the most leveraged in history:

China Credit Currency and Credit Bust
While the mother of all financial asset bubbles is represented by US stocks and credit today, China represents the mother of all credit bubbles based on its massively overvalued currency and banking system.
In June, we showed how Crescat can perform as the China credit bubble just started to burst. Crescat Global Macro Fund was one of the top hedge funds through June YTD thanks to our significant yuan short position and other China credit bust plays. We strongly believe there is so much more to play out, especially with respect to China’s currency devaluation.
China has been the fastest growing major GDP economy in the world, contributing over 50% of global GDP growth since the Global Financial Crisis. But the China miracle has all been accomplished by unsustainable debt growth, non-productive capital investment, and a massive hidden non-performing loan problem. China’s NPLs are estimated at close to USD 10 trillion according to one respected China credit analyst, Charlene Chu, at Autonomous Research. Our analysis concurs. We published our most in-depth China credit bubble research letter last year and we believe that China is now entering a recession that would occur with or without Donald Trump’s trade war which is hastening it.
As shown in the charts below, China’s massive and unsustainable banking asset growth represents a substantially bigger banking imbalance than that of the US prior to the Global Financial Crisis and a bigger imbalance than the EU banking bubble prior to the European Sovereign Debt Crisis. 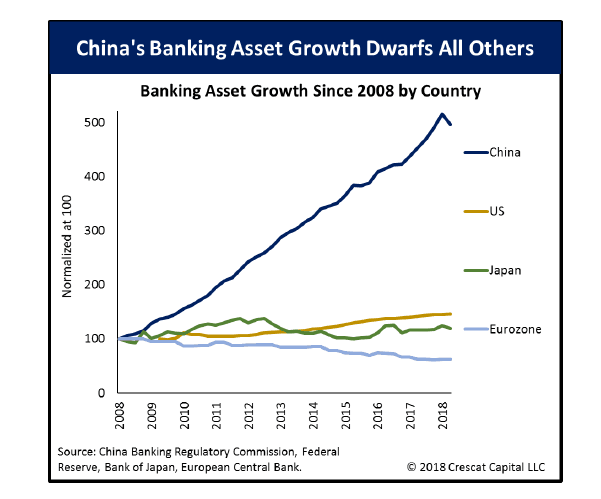 Precious Metals
Gold is cheapest ever in history compared to the global fiat monetary base as we recently showed. Silver is historically cheap to gold. Miners are historically cheap to their own fundamentals, and even cheaper when one considers depressed gold and silver prices today. Precious metals are the ultimate inflation hedge and haven asset of our two MOABs, China credit bubble and the US financial asset bubble burst. Too many investors fear another deflationary bust if they fear one at all. Asset bubbles will certainly deflate. But real economy deflation is the last war. The Fed has already proven in the last cycle that money printing conclusively can beat deflation. We have shown above the many signs of rising inflation today, from rising money velocity, to de-globalization, to new higher fiscal deficits from tax cuts, to Phillips Curve pressures, to Crescat and Fed models that show the Fed still way too accommodative to stop rising inflation. The Fed is currently rendered ineffective in fighting inflation because any serious effort to do so would risk bursting record financial asset bubbles.
Therefore, if we could own just one asset class to hedge against ultimately rising inflation as record financial asset bubbles are bursting, it’s precious metals. Next to the US dollar, gold remains the most ubiquitous central bank reserve asset in the world and global central banks have been net acquirers of it since it bottomed in 2015. We want to be on the same side of central banks.